Convoloid gear system designs reduce the size and weight of a wide variety of gear drives compared to their involute counterparts, leading to significant economic gains.

Convoloid® tooth forms and the technologies that are integral to its ultimate economic success—including design, rating, manufacture, and inspection—have been developed by Genesis Partners LP. The objectives of this article are to provide detail about the design features of the form and the stress rating of the gearing with emphasis on the manufacturing and inspection techniques that have been used successfully in several test programs.

Since the 1694 invention of the involute curve by the French scientist Philippe de la Hire, and the application thereof to gearing by the prolific Swiss mathematician Leonard Euler, the world has embraced and developed this type of gear tooth form to a very high degree of engineering and manufacturing excellence. Improvements in recent years have been relatively modest, since this form has been so rigorously studied and applied. The long-term adoption of the involute is rooted in large part to the simplicity of its tools and field operation. Straight-sided tools and conjugacy, even with limited changes in center distance, were consistent with the industrial revolution of the 18th, 19th, and 20th centuries, and the mechanically based machine tools and tolerance capabilities of these ages. The recent ubiquitous nature of computers and CNC machinery enhances the cost-effective freedom to optimize many parameters affecting our everyday life including gear tooth forms.

The design protocols of Convoloid gearing incorporate the following precepts, which are crafted to maximize the load carrying capacity per unit volume (maximum power density) of gear drive systems and to maintain the economic viability of the technology.

• The Euler Savary equation for conjugacy is satisfied.
• The preponderance of the tooth meshing surfaces are conformal, i.e., convex/concave, to lower Hertz stresses as far as possible.
• Nearly constant relative radii of curvatures for essentially constant Hertz stresses up the entire tooth flank.
• Optimized relative curvature ratios for lowest possible Hertz stresses.
• Carefully crafted concave dedendum and root fillet for best tooth beam strength characteristics. This fact is especially important since Convoloid pairs running at considerably lower surface stresses compared to involutes can run at increased torques requiring higher tooth beam strength to affect a balanced design.
• Manufacturing and inspection requirements of the tooth form must fit well into today’s capital asset infrastructure. The combination of Convoloid forms and the plethora of CNC machinery in use today permit this new technology to be efficiently and economically manufactured and inspected.
• There is no base circle, thus no limitations on numbers of teeth in pinions with regard to undercut. Tip relief protocols have been developed by Genesis that are basically modified AGMA practices utilizing the lower beam stress characteristics of the Convoloid form and thus smaller tip relief amounts compared to like sized involutes with like load intensities.
• Profile contact ratios of Convoloid pairs vary with design but are generally in the 1.1 to 1.3 range. Face contact ratio practice uses integers of face contact ratios with a small overage to allow for crowning effects and other anomalies, e.g., 1.05, 2.05, 3.05, etc.

The rating protocols and practice governing Convoloid gearing mirror the large majority of the practices followed by AGMA, ISO, and others. The bending stress is calculated initially using cantilever beam theory and then modified using a stress concentration factor of 1.5 through FEA. Substantiation of this value was confirmed with test data and performance. Contact stresses are calculated using conventional Hertz theory. Derating factors for Convoloid gearing are applied using accepted and established criteria. Dynamic factors, life factors, stress concentration factors, and load distribution factors are applied in the same manner as with involute practice. Allowable stress limits for various materials and their heat treatment are applied directly to Convoloid designs as they would be for involutes. It is in the area of flash temperatures and scuffing analysis that Convoloid pairs are different from that of involutes. The Convoloid form (Figure 1) must be analyzed using its own particular set of dependent parameters to arrive at meaningful plots of flash temperatures and scuffing propensities

A depiction of the general drivers of Convoloid torque advantages over “equivalent involute pairs” i.e., comparison pairs of the same center distance, face widths, ratios, and materials and heat treatments, is shown in Figure 2.

A cost-sharing contract between Genesis Partners and the National Renewable Energy Laboratories (NREL) compared (2) Micon 108 gear drives used in the wind turbine industry (Figure 3). The two gearboxes were completely disassembled and center distances repaired and re-machined to their original sizes. Extensive modifications for housing strain gages and other data gathering functions were also included in the re-machining process. The two-stage involute gear design was completed by Gear Engineers of Seattle to insure the latest gear design techniques as the baseline involute design. Genesis Partners designed the Convoloid variant to:

Table 1 summarizes the results of the accelerated life test. An intermediate stage bearing failure terminated the test and substantial costs were to be incurred to fix this problem so the tests were concluded. Note that most of the test time was well in excess of the rated capacities of the systems. The six-hour segment of the test at high loads and speed resulted in failure of the CV joint grease shields and speeds were then reduced to lower acceptable levels. At the test conclusion the involute unit exhibited rapidly advancing micropitting where the Convoloid unit showed micropitting in the transition zone area but had stopped migrating and was performing well. Figure 4

• Blanking from the same material (AISI 4620 carburizing steel)
• Rough cutting of the teeth using one of the hobs pictured in Figure 5. The basic rack form of the Convoloid gears is calculated and the hob manufacturer uses this data to form the hob profiles on CNC machinery. Cost is essentially equal to that of a special involute hob. The hobbing process proceeds in exactly the same manner as does that for involutes.
• Carburizing proceeds in the standard way for both the involutes and the Convoloids
• Finish tooth grinding was done for both variants on a Gleason Pfauter Gear Tooth Grinding Machine. Both the involute and Convoloid gears had tip relief, both had lead corrections calculated with the very comprehensive LVR program, and both had crowns. The tip relief and crowning practice for the Convoloids used Genesis Partners’ own developed protocols where the involutes used classical AGMA standards

It is important to note that the inspection accuracies for most, if not all, inspection parameters can be obtained for Convoloid gears and compared and classified directly to the accuracy classes delineated by AGMA 2015 and other similar international standards.
A newer and more convenient process has been recently developed for Convoloid gears using high accuracy scanning GMMs, where direct measurements of tooth surface topographies are compared to the actual x, y, and z coordinates of a crafted Convoloid tooth flank. This advance is a dramatic step forward in the inspection of Convoloid gears.

As an example Figure 6 shows the plots of a Convoloid gear (45 teeth, 3.0 transverse module, and 35 degree helix angle) with arbitrary form limits set at +/- 7.5 microns. The various diameters descriptive of the plots are delineated. The plot shows good form in the addendum and dedendum and a slightly deeper transition zone than specified a feature that would not be detrimental to Convoloid gear operation. Figure 7 shows the lead checks at the addendum midpoint (AMP) and the dedendum midpoint (DMP). All measurements were completed using a Zeiss Super Accuracy Prismo Navigator with the VAST Gold scanning head and rotary table.

With the ability of Convoloid gear system designs to reduce the size and weight of a wide variety of gear drives by 20-35 percent compared to their involute counterparts the implications for economic gain in embracing this new technology are very significant. Once the technology is learned and applied Convoloid manufacturing times, operational sequences and process steps closely match those of involute technology. Providing the bearing manufacturers keep in step with the increased power density afforded by Convoloid technology (confirmed by at least two prominent international manufacturers) and that other associated components do the same, Convoloid gearing systems can reduce the cost per unit of torque or power approaching that 20-35 percent reduction in weight and size. The economic implications for embracing and applying this technology are far reaching and can favorably effect market share, product performance, and long term profitability.
Genesis Partners LP is the owner of the Convoloid® Intellectual Property (IP) portfolio and can develop cost and time effective Cooperative Development Agreements leading to options for technology licensing relationships for interested parties. 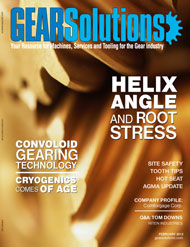