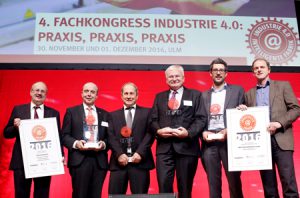 Unlike a number of companies in other industries, machine manufacturer Klingelnberg is banking on compatibility, not a self-contained solution, in its quest to adopt Industry 4.0. According to the company, it’s not about networking in-house machinery alone. It’s about integrating a plethora of systems and software into a cyber-physical production system. And it’s an approach that seems to be resonating. During the Industrie-4.0-Award ceremony, which took place in Ulm, Germany, on November 30, 2016, Dr. Hartmuth Müller, head of Technology and Innovation at Klingelnberg, accepted an award in the Integration of Design and Production category.

With the Internet of Things — connectivity between smart devices in the upstream and downstream areas of a shop floor — the industry is currently on the verge of taking a powerful, revolutionary leap forward. Cyber-physical production systems seamlessly connect the physical world to the digital world, making it possible to implement changes without a latency period. According to the engineering and economics experts behind the Industrie-4.0-Award, the biggest obstacles preventing a breakthrough of Industry 4.0 right now are a lack of standardized interfaces and a way to collect and evaluate the relevant data in the world of big data. Many manufacturers are focused on developing systems of their own. As a result, there are a number of excellent local solutions, but they don’t communicate with each other.

Machine manufacturer Klingelnberg, a specialist in toothed gear and transmission technology, has taken a different approach from the outset.

“Our corporate philosophy directs us to adapt perfectly to existing environments and ensure we are compatible with the existing software and machine structure,” said Müller.

The company, a market and technology leader in its industry, has applied Industry 4.0 thinking to toothed gear manufacturing and has created a cyber-physical system that provides a smart digital twin for the toothed gear at every step along the entire value chain. This opened the door for the introduction of quality gates, where the geometry specified for the current production step is tested in real time. Any manufacturing deviations are immediately corrected on the spot by software-based assistance systems. Thus every manufacturing deviation is caught and corrected, and at the same time, the customer receives detailed documentation — a “family tree” of the customer’s component, so to speak.

Achieving smart connectivity from the time a toothed gear is calculated to the time it is manufactured was a minor revolution — for the gear cutting industry in particular: The CAD- CAM process has been a standard in workpiece machining for many years now, but this Industry 4.0 principle cannot be applied on gear cutting machines. Why not? A “normal” component is described as a 3D model. It’s not until later, in the subsequent CAM process, that tools are selected and NC files are generated for the purpose of actually manufacturing the digitized workpiece on the machine tool. However, a toothed gear is not described as a 3D model. Instead, the tool geometry and relative motion between the tool and the toothed gear slated for production are described based on the theory of the involutes and other curves. The geometry of the tooth flanks of the toothed gear comes about almost as a “byproduct.”

That is why Klingelnberg's system includes not only all of a component’s geometrical information, but also information about the tool as well as a description of a virtual cutting machine's manufacturing movement — for both soft machining and hard machining. These data are automatically supplied by Klingelnberg’s KIMoS program system and form the digital backbone of every production step. Every machine and program system involved in the process has thus been integrated horizontally, with a central database containing the digital twins and the geometry-determining technological parameters for every step in the manufacturing process. To get to this point, the company consolidated over 20 years of development work in one system.

Twenty to 30 years ago in the aviation industry, the certified master gear model still stood in for every additional “clone” — with every little scratch and surface defect, making it a challenge to reproduce parts from measured data. In its initial step toward a cyber world, Klingelnberg calculated how the tool penetrates the component in a cross-sectional simulation. And for the first time, Klingelnberg was able to digitize the formation of the tooth flanks with its software. The developers continued to hone the Klingelnberg Integrated Manufacturing of Spiral Bevel Gears (KIMoS) program until the design software produced a tooth flank geometry that was an electronic copy of the master gear. But this electronic template did not just contain the nominal data for the digital twin; it also contained the “machining specification” — the exact geometry of the gear cutting tool as well as the movement required to manufacture the tooth flanks.

“That was the real appeal of KIMoS,” said Müller, in describing what Klingelnberg had set out to accomplish. “We wanted an intelligent digital twin, not an electronic shadow that only described the surface of the tooth flanks.”

Bevel gears are cut using specially ground and coated carbide blades, which must be installed with extreme precision in the cutter head. The slightest changes in the shape of the cutting edge or in the installation on the tool carrier can lead to production or installation deviations, and the component will not fully comply with the calculated setting data as a result. Where machine operators make readjustments in practice, Industry 4.0 thinking calls for digital solutions. To answer the call, Klingelnberg created its Closed Loop assistance system, an automated link between the production machines and the measuring technology. Machine setting values are automatically adjusted to the nominal data with such precision that deviations measure a mere 2 to 3 micrometers — a quantum leap in quality. The process chain has Closed Loop modules for blade grinding, gear tooth cutting, and gear grinding, as well as for setting of gear cutting tools.

Using these KIMoS modules and the Closed Loop assistance system, both of which operate in a linked network environment, Klingelnberg created its first cyber-physical system approximately 15 years ago — at a time when others were still copying master gears. Another integral part of a cyber-physical system’s functional scope is the deburring process, which is handled in exactly the same way on the cutting machine as gear cutting: The tool and the machine movement are specified by KIMoS and stored in the database.

The KIMoS design software calculates the size of toothed gears and the flank profile, but not the gear body. This is done by 3D CAD systems from external suppliers. For a seamless cyber-physical system, interfaces had to be created, which Klingelnberg accomplished three years ago: A file created in KIMoS can be sent to various suppliers’ CAD systems, whose 3D representation integrates the KIMoS-calculated tooth flank profile at the tip of the pinion or on the surface of the ring gear. Interfaces were also created to simulation software applications for other users’ complex powertrain designs. Thus, the digital twin continued to take shape.

Integrating heat treatment was the last big step toward digital connectivity: Every heat treatment causes distortions that cannot be calculated in advance. Klingelnberg painstakingly measured and documented these distortions and was able to identify correlations that permit an extremely accurate prediction of distortion phenomena.

“The fact that we were able to incorporate these physical uncertainties and general conditions into our system was the critical breakthrough,” said Müller. “We are now truly operating in a seamlessly integrated cyber-physical system that encompasses every step in design and production.”

Klingelnberg rolled out the system on its Drive Technology product line approximately two years ago. Since then, large bevel gears have been manufactured exclusively in the cyber-physical production system. But in line with its principles, the company did not develop the system solely in its own interest.

“Our aim is to help our customers, and that’s why we deliberately created interfaces to other machines as well,” said Müller.

This means that every device in a customer’s production line can share the centerpiece of Klingelnberg’s cyber-physical system: the large database that supplies data to every machine in the upstream and downstream processes. The database contains a toothed gear’s complete history: identification numbers for every component, tool, and machine movement, for both soft machining and hard machining.

It's a comprehensive database at the heart of a cyber-physical system that connects the design and production processes in an end-to-end network, impressive enough to win over the jury at this past year’s Industrie 4.0 Award. In citing the reasons for its decision, the jury made special mention of the many interface solutions — an aspect that has generally not been given due consideration in the evolution of Industry 4.0 solutions, but one that will be crucial for the future of Industry 4.0.