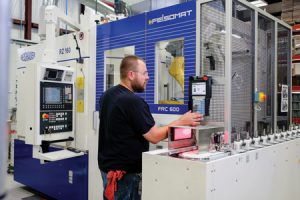 Forest City Gear has expanded its high-volume gear production capabilities with the addition of a Reishauer RZ 160 gear grinding machine and Felsomat FRC 600 high-speed load/unload automation. The system is part of a new 8,500-square-foot facility located in close proximity to Forest City Gear’s main plant and dedicated to the high-volume production of eight different gears for a robotics application.

The new Reishauer offers a highly productive and extremely accurate continuous generating grinding process, as well as dual work spindles to further increase productivity by enabling workpiece setup and synchronization on the idle work spindle while simultaneously gear grinding on the other spindle. As a result, Forest City Gear has added significantly to its capacity for hard finishing gears in volumes much higher than what was possible before and with exceptional quality, according to Forest City Gear Director of Operations Jared Lyford.

“Previously, we were using our hobbers to perform the finishing operation after heat treat using the carbide re-hobbing process, commonly known as skiving,” said Lyford. “But with volume levels now four times what they were at the start of this project in early 2015, we needed a process that would greatly increase hard finishing throughput and free up more spindle time on the hobbers for rough cutting.  The RZ 160 is delivering these benefits, and more.”

Lyford estimates that at current part volumes, some 13,000 hours of machining time would have been necessary to finish the gears using the carbide re-hobbing process; the new Reishauer can finish the same number of gears in just 2,400 hours.  In addition, the annual cost for tooling has been reduced from an estimated $300,000 for the solid carbide hobs used in the carbide re-hobbing process to an estimated $25,000 for the multi-start grinding wheels used in the continuous generating grinding process.

Forest City Gear has also invested in several system enhancements that will add even more productivity to the system, according to Lyford.

“At these volumes, wheel dressing takes place frequently, about once an hour, so we’ve invested in a ‘multi-rib’ dressing diamond tool that dresses all five of the starts on the grinding wheel in a single pass, versus the usual process of dressing each start one by one,” Lyford said. “We’ve also integrated a Felsomat FRC 600 30-station, dual-pallet parts conveyor with a high-speed Fanuc robot to automate workpiece load/unload for greater efficiency.

“For those in the global marketplace that have always known Forest City Gear as a low volume, high-precision manufacturer of one-off gears — guess again,” Lyford said. “Today, we’re prototyping, qualifying, and producing gears at volumes no one would have expected here a year or two ago.”

Roscoe, Illinois-based Forest City Gear has, for over 60 years, been one of the gear industry’s leading sources for the development, manufacture, and inspection of the highest quality gears for use in applications that range from medical devices to motorcycles, airplanes to automation, and even the Mars Curiosity Rover.