A new gear lab workholding solution allows bevel gear manufacturers to reduce the time it takes to get fully functional, extremely accurate workholding for their gear testing and development efforts.

The bevel gear manufacturing landscape has changed extensively in recent years, particularly for producers of driveline components for the light truck and automotive markets.

The days of producing hundreds or thousands of the same gear in one long dedicated batch have given way to a new era of smaller batch production to meet fast-changing consumer demand. In response, revolutionary new quick-change workholding solutions have been developed to greatly reduce workpiece changeover time in these fast-paced production environments.

Yet, workholding is still slowing down these producers — not on their production floors, but in the gear labs where new quieter-running, more fuel-efficient, and longer lasting gears are in continuous development. Here, quick-change isn’t nearly as important as quick delivery and flexible solutions, according to Gleason’s Director of Global Product Management, Workholding, Tim Zenoski.

“The new bevel gear development process can take many weeks — often exacerbated by lead times for tooling for executing trials,” Zenoski said. “Gleason has now created workholding solutions well-suited for gear lab trials and even many jobber applications, with short delivery times at an ecomomical price.”

Gleason set about developing a new solution with the recognition that production workholding is over-designed for many gear lab, prototyping, and other small-batch applications. According to Zenoski, what was missing from the marketplace was the closest thing yet to a universal workholding system.

“Without sacrificing functionality and, most importantly, typical workholding accuracies of ±0.005 mm (0.0002″) total indicator reading, we now can offer a system where just three standard size modules can meet the requirements of gears ranging in size from 3.5″ in diameter up to 8″ in diameter, and the same modular concepts apply to pinion applications,” Zenoski said.  “For gear development and short-run prototyping or even some production, this means you’ll need far fewer workholding systems, on order or in inventory, for a wider range of gears.”

Gleason “Gear Lab” Workholding functions much like the other bevel gear workholding in Gleason’s wide array of solutions where a workpiece is chucked firmly in place when the production machine’s draw rod pulls back on an expander in the arbor to actuate the collet that grips the gear. The gear is, at the same time, pulled securely against a backing ring to ensure precision. In the case of Gear Lab Workholding, however, the expanding collet has been replaced with a set of bolt-on, interchangeable jaws to perform the clamping function, and one backing ring can be used for a wider range of gear diameters. (See Figure 1.)

“The application of standard workholding is inherently limited by the exact gear diameter that its collet and backing ring were designed for,” Zenoski said. “Gear Lab Workholding’s interchangeable jaws design means that jaws can be easily ground to accommodate a different gear diameter and changed out in an existing arbor much faster and at less expense than ordering a completely new system. Additionally, the backing ring does not have to be changed in many instances, even if its diameter is not exactly the same as the gear’s, because wear is not an issue as it would be in a production environment.”

Gear Lab Workholding is now available to customers in three standard modules: for 3.5″ to 4.5″ diameters; 4.5″ to 6.5″ diameters; and 6.5″ to 8.0″ diameters. The system can be applied to Gleason bevel gear cutting and grinding machines for both soft cutting and hard finishing of gears and pinions, as well as Gleason bevel gear lapping and testing machines, and competitive machines that utilize a Gleason spindle taper.

Initial reaction from the first customers has been extremely positive, according to Zenoski.

“Based on their initial test results in a cutting application, one of our large axle manufacturers has already asked that we quote this for gear lab application across the full range of processes, and every size module,” Zenoski said. 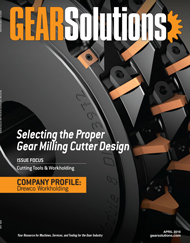 The Principles of Workholding: Part II

Equipment-as-a-service: Understanding all the moving parts

The advantages of pulse plasma nitriding