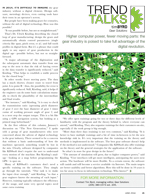 In 2014, it’s difficult to imagine the gear industry without a digital element. Design software, metrology devices, even cutting tools have their roots in an operator’s screen.

But people have been making gears for centuries, without the aid of digital technology. How was this possible?

“It was possible before, but not so straightforward.” 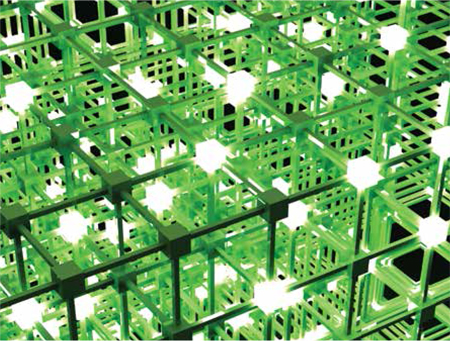 That’s Dr. Ulrich Kissling describing the closed loop of gear manufacturing: design the gears and automatically obtain control parameters (single criteria like span, pitch error, et al.) and full tooth profiles in digital form. But it’s a phrase that could apply to any aspect of gear production in the digital age—possible before, but not so straightforward.

“A major advantage of the digitization and the subsequent automatic data transfer from one step to the next is that the risk of having errors in the data transfer is significantly reduced,” said Kissling. “That helps to establish a stable process for the closed loop.”

In other words: fewer moving parts. The data has a much shorter, cleaner route to travel from point A to point B—thus, the possibility for error is significantly reduced. Still, Kissling, said, it helps if the engineer can do some basic calculations manually to check the plausibility of the intermediate and final results.

“For instance,” said Kissling, “it is easy to check the transmission ratio (operating pitch diameter of gear 2 over the base diameter of gear 1 times cosine of working pressure angle of gear 1) and in a next step the output torque. This is a bit like using a GPS navigation system, but looking at a printed map beforehand.”

In the first edition of this column, January’s discussion on “The New Generation,” I spoke with a group of gear manufacturers who were concerned about the advent of digital technology in the gear industry. There seemed to be a concern that without a basic understanding of how the machines operated, something would be lost in the mix. Clearly, software designed by companies like KISSsoft don’t require the user to undersand every motion of the machine. But Kissling’s analogy—looking at a map before programming the GPS—is spot on.

Many of KISSsoft’s customers don’t need a specific training on the software. They simply go through the tutorials. “Our task is to make the input clear enough,” said Kissling, “so that a gear engineer knows the meaning of each input.” However, training typically enhances the efficiency of the usage, and some very special topics need some extra training.

“We offer open trainings going for two or three days for different levels of familiarity with the program and the theory behind it, where everyone can attend,” said Kissling. They also organize trainings for their customers on-site, especially if the work group is big enough.

“More than three days (training) is not very common,” said Kissling. “It is better to have multiple trainings and a bit of time in-between to let the new knowledge sink in. It’s very important that the training on the theory and methods is implemented in the software. The best gear software doesn’t help if the method is not understood.” Companies like KISSsoft also offer trainings on the theory and the general strategies for the application of the software.

So what’s in store for gear design in the future?

“The amount of simulation will grow, due to higher computer power,” said Kissling. “User interfaces will get more intelligent, anticipating the users next action. The hardware will be more flexible. To a certain extent, the software will vanish and will become a service available via Internet. The main targets are better usability and better algorithms. How this will be done in 10 years is too far away to focus in information technology. Who knows?”