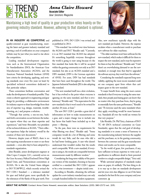 In an industry as competitive and quality-oriented as gear manufacturing, meeting the latest and greatest industry standard and sporting a seal of certification on your company’s website may be just what you need to rise above the competition.

Leading standard development organizations such as the International Organization for Standardization (ISO), the American Gear Manufacturers Association (AGMA), and the American National Standards Institute (ANSI) have criteria for developing, applying, and revising standards once every five years (at least) by specialized technical committees dedicated to that particular subject.

These committees facilitate conversation and make the development of standards possible. They create a cohesive approach to engineering and gear design by providing a collaborative environment for industry experts to share knowledge from their area of expertise (e.g. design, materials, troubleshooting, etc.) and propose a solution.

“Through that activity, a one-on-one, back-and-forth conversation occurs between the industry experts where they can share expertise and experiences,” said Amir Aboutaleb, vice president of the technical division at AGMA. “Their collective experience helps the industry overall by the creation of these new documents.”

However, despite years of R&D, there is no rule requiring manufacturers to meet or use those standards — even after they’ve been adopted by a standards organization.

John Rinaldo, senior development engineer at Atlas Copco Comptec LLC, currently serves on the Gear Accuracy, Helical Enclosed Drives High Speed Units, and Nomenclature committees at AGMA. He is also the United States delegate to ISO TC60/WG2, which recently revised the ISO 1328-1 Standard — a tolerance standard for spur and helical gears; more specifically for the tolerances of the flanks of the gear teeth. First published in 1995, ISO 1328-1 was revised and re-published in 2013.

“This standard  has evolved over time between the AGMA and ISO,” Rinaldo said. “Currently, it is an ISO standard that AGMA has adopted. It’s something hopefully everyone throughout the world is going to start using because it’s the first standard that looks like it will be accepted within the gearing community not only as an ISO standard, but also as an AGMA standard and a DIN standard, (DIN is the German equivalent of ANSI). For years, DIN has had standards that have been used throughout the world. The Japanese Industrial Standards (JIS) is also adopting this standard.

“The new standard itself was a slow evolution, but it has evolved to the point where everyone is agreeing on the same standard, and that is revolutionary,” Rinaldo said. “The expectation for this new standard is that it won’t need to be revised for another 20 years, at least.”

The new ISO 1328-1 provides a great deal of information on how to make measurements on a gear, and a major change was to include one key factor that hadn’t been included up to that point — filtering.

“In the past, there were no requirements for what filtering was done,” Rinaldo said. “Some companies would do a lot of filtering and some would do very little, and the ones who did a lot had better looking gears. A user who doesn’t understand that wouldn’t realize that the results aren’t comparable. With a new standard, if everyone is using it, the results are comparable between measurements made by different vendors.”

Considering the long-term validity of the previous version of this standard, choosing to become certified to a standard like ISO 1328-1 appears to be a wise investment — despite initial costs.

According to Rinaldo, obtaining the software update for a new industry standard may cost only a couple hundred dollars for modern equipment. Also, new machinery typically ships with the new standard pre-loaded. However, the expense escalates when a manufacturer needs to purchase new software for older machines.

Considering the standard’s expected long-term validity, applying the most recent standard could set one company apart from others that can’t inspect gears to the new standard.

“A major benefit from using the most current standards is that if everyone is using the same standard, then people purchasing gears can know that no matter who they purchase from, they’re going to essentially have the same performance,” Rinaldo said. “If everyone used the same standards where they apply, everything would be more harmonious. Standards all over the world are written for that very purpose.”

Like Rinaldo, Dr. Phil Terry, chairman of ISO/TC 60 (ISO’s technical committee on Gears Standards), agrees that the end goal of developing standards is to create a sense of harmony in the manufacturing industry between the supplier and the purchaser, or, in the gearing community, between the customer and the gear manufacturer where end results can be more comparable.

“In the world of gears, few purchasers, if any, have sufficient in-house expertise to write such a specification in sufficient detail to limit potential vendors to a single comparable design,” Terry said.

While universal adoption of standards makes sense on paper, it’s unlikely. The best thing to do is to stay up to date on standards development and do your own due diligence to see if the latest standard is the best fit for your company and your customers.