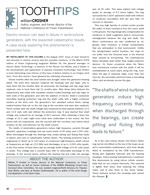 My installment of this column in the August 2007 issue of Gear Solutions was devoted to electric erosion and the possible solutions. In the March 2009 edition of Power Engineering magazine William Oh, the general manager of Electro Static Technology—a division of the Illinois Tool Works, and a leader in the development and application of passive ionization technology—has written a most interesting case history of this type of failure relative to an Oregon wind farm. From this article I have gleaned the following information.
Eleven months after the wind turbine was brought online the generator bearing failed. The wind farm operator replaced the bearings and slip rings, only to have them fail five months later. As previously, the bearings and slip rings were replaced, only to have them fail 11 months later. After these three failures the replacement was made with insulated ceramic-coated bearings and slip rings on both ends of the generator, and with the addition of Electro Static’s conductive microfiber bearing protection ring and the shaft collar with a highly conducive surface at the drive end. The generator’s two standard carbon block, spring-loaded bushes that rub on the slip ring at the non-drive end were also replaced. Three months later the shaft voltage was measured at wind speeds between 10.2 and 13.4 mph, with and without the protection ring. It was learned that shaft voltage was reduced by an average of 84.5 percent. After obtaining a base line voltage at 12.1 mph, eight more tests were undertaken in two series: the first series with all components, and the second with the non-drive end carbon block brushes as the only diversion for the shaft current.
The shafts of wind-turbine generators induce high frequency currents through parasitic capacitive couplings and can reach levels of 60 amps and 1,200 volts. When discharged through the bearings they create pitting and fluting that leads to failure, and even to catastrophic turbine failure. The bearing protection ring is engineered to divert up to 120 amps of continuous high-frequency shaft current at frequencies as high as 13.5 MHz and discharges of up to 3,000 volts (peak). In the first series of tests there was an average shaft voltage of 6.41 volts (peak to peak). This voltage was a smooth wave with no detectable discharge to the bearings. In the second series, without the bearing ring and collar, the average was 41.35 volts. This wave pattern had voltage peaks an average of 6.5 times higher. The ring surrounds the 5.824” generator shaft with millions of conducive microfibers that are less than 10 microns in diameter.
This very high density of contact points provide the paths of least resistance from the motor shaft to the ground. The ring design also compensates for variations in shaft roughness and/or microscopic misalignment between the ring and shaft. The fibers’ performance are also unaffected by oil, grease, dust, moisture, or similar contaminants that are anticipated in that environment. Unlike the spring-loaded carbon brushes, the rings do not suffer from the frictional wear or the thermal wear caused by hot-spotting. The multitudinous fibers dissipate heat better than single-conductor devices. On those occasions when the fibers lose mechanical contact with the shaft, it will be reestablished at some place along the ring. Even when the gap is relatively large, more than five microns, the secondary electrons have a cascading effect and accelerate across the gap.
As in the case history shown, the Electro Static ring can be retrofitted on the top of the tower as an aid to preventative maintenance, and most ideally fitted at installation by the OEM manufacturer. Arcing also degrades lubricant and the bearing raceways. Some bearing manufacturers counteract this phenomena by using silicon nitride ceramic balls that do not conduct electricity. This material is lighter than steel, thus reducing the rolling mass, and is also three to five times harder. These features protect the raceways and extend the lifespan.