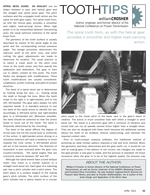 An analogy can be drawn between a spur and helical gear and the straight and spiral bevel gear. The pitch surfaces and the conjugate tooth action are the same for both gear types. The spiral tooth form, as with the helical gear, provides a smoother and higher load-carrying action. When high power is to be transmitted between intersecting axes, the usual optimum selection is the spiral bevel form.

The geometry of the tooth surface is usually described by means of the spiral angle at any point and the corresponding normal pressure angle. The design procedure determines the optimum point of the pitch cone, and when cutting the gear, adjustments are made to determine its location. The usual practice is to select a mean point on the pitch cone close to the tooth center and then specify the addendum and dedendum. The gear is then cut to obtain contact at this point. The tooth flanks are designed with modifications. Three tooth modifications are usually considered: Lengthwise, profile crowning, and path-of-contact direction.

The hand of a spiral bevel set is determined by looking along the axis, i.e., looking along the shaft or through the bore. When the teeth slope to the right it is right-handed, and to the left, left-handed. The gear pairs always run with opposite hands. It is standard practice to use the hand of the spiral pinion to identify the set; accordingly, a left-hand pinion and right-handed gear is a left-handed set. Whenever possible, the hand should be selected so that the pinion tends to move out of the mesh. The hand is frequently determined by the mounting.

The hand of the spiral affects the degree of thrust load, but not the sound level or uniformity of the action. A right-handed pinion driving in a clockwise direction will have a tendency to move towards the cone center. A left-handed pinion will act in the reverse direction. The direction of movement is also reversed when the gear runs counter-clockwise.  The spiral angles that are commonly used lie between 30º and 35º.

Although the spiral bevels have curved oblique teeth, they mesh in a similar manner to a straight tooth bevel set. Each gear of a matching pair has a pitch cylinder and a pitch plane. The pitch plane is a surface tangent to the mating gear’s pitch cylinder. The pitch surface of the pitch cylinder has a radius based on a circular pitch equal to the linear pitch of the basic rack in the gear’s plane of rotation. The action is much smoother than with either a straight or zerol bevel set. The result is a precision gear with a minimum of vibration and sound that can run at speeds several times higher than a straight bevel. They can also be designed with fewer teeth because the additional overlap allows the teeth to be stubbed, without undercutting, and maintain the required contact ratio. (Figure 1)

Prior to tooth-contact analysis software, the traditional method of achieving an ideal contact pattern required a trial and error method. When the geometry had been determined and the gear teeth cut, it would be run with at mating gear. If the pattern is not correct, the changes are made to the gear grinder, a new gear is made, and the process is repeated. On those occasions when the gear is to be of the highest quality, the process may be repeated many times. The size and position of the contact pattern is critical to the drive performance and always requires checking. Tooth contact must be very closely controlled. Gears are usually assembled with a small localized area of contact in the center of the tooth; as the tooth is loaded, the contact area expands and moves towards the tips of the teeth.

Table 1 provides the minimum number of teeth for pressure angles other than 35º.

The number of teeth in the gear will be the number of pinion teeth multiplied by the ratio. (Figure 2)

The face width of a spiral bevel gear should be limited to 30 percent of the cone distance, and a popular rule is that it should not exceed 10 divided by the diametral pitch. The pitch specified is the diametral pitch and is always measured at the tooth’s large end.

In each new design, six independent parameters need to be resolved:

1. The width of the mesh face
2. The pinion bore size
3. The gear bore size
4. The normal pressure angle
5. The mesh spiral angle
6. The number of teeth in pinion and gear.

The basic AGMA rating formulae can be applied to spiral bevel gears that are generated by any of the methods detailed in “Chapter Eight: Manufacturing.” It is only necessary to make adjustments using the appropriate value-of-face contact ratio. The gears may have different tooth forms with different addendums, whole depth, fillet, tooth thickness, radius, and proportions.

Gears with a skew axis are referred to as spiral gears having the geometric features of a hypoid. They can be said to have originated with the development of the Spiroid® by the Illinois Tool Works in 1954. Several patents exist principally by Russians and Americans. Predominant names are Saari, Georgiev, and Goldfarb. 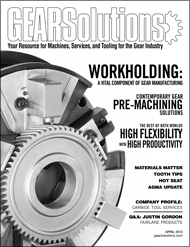