The second in our multi-part series on vibratory processing of gears is focused on the selection of media that will be used to improve gear surface quality.

Media Contact Pattern vs. the Form of the Surface to be Contacted

When gear finishing callouts require a final tooth flank Ra that is lower than the as-shaved, as-lapped, or as-ground surface, a typical response is to use vibratory abrasive ceramic media for generic tooth finishing to an Ra = 8–20 µinches, or high-density, non-abrasive media for an isotropic superfinish of Ra ≤ 4 µinches.

Size, shape, and composition of media used depend on the morphological form of the gear teeth and the final Ra value required. Abrasive ceramic media typically contains aluminum oxide abrasive grit and mechanically abrades the surface to improve the Ra value. In isotropic superfinishing, a chemical accelerator is employed to create a soft conversion coating that is wiped from the tooth flank surface with the high-density non-abrasive media.

Vibratory processing is optimized when the shape of the media closely matches the shape of the tooth flank. The most efficient contact pattern is plane-to-plane. When the flat face of the tooth flank is matched with a media having a flat-face(s), then the maximum surface area possible is contacted per unit of processing time. Plane-shaped media examples are straight and angle cut triangles, tetra-pyramids, and the base of a cone.

Circular-shaped media, such as cylinders, offer a less efficient tangent-line contact pattern. Such contact isn’t planar, but linear. Much less surface area is contacted per unit of processing time and the cycle is usually extended. Media offering linear contact patters are cylinders, or the side of a cone.

The two main components in the make-up of an abrasive ceramic media are aluminum oxide grit and clay. Blended together with several other ingredients, the media is extruded through a die, cut to length, then kiln-fired. The kiln firing operation converts the clay to ceramic. Assorted clay types that may be used are river, bentonite, kaolin, porcelain and china clay. After firing we can consider the resultant ceramic as the binder that holds the media together.

When considering media composition, we are trying to determine which media to use based on the ratio of the abrasive grit to the ratio of the clay. As the percentage of abrasive increases in the composition, the proportion of ceramic must consequentially decrease. Since the ceramic is the binder that holds the media together, a media with less binder present has a higher attrition rate. Attrition is the rate at which media decreases in volume as a function of processing time. A high abrasive media with a high attrition rate decomposes rapidly, contributing more loose abrasive into the vibratory mass. This increases abrasive action, decreases processing time, and produces a matte final finish. An attrition rate of 2 percent per hour is typical.

Isotropic superfinishing employs high-density, non-abrasive media to wipe, not abrade, surface asperities when used with a chemistry that forms a soft conversion coating. A non-abrasive media leaves a mirror-reflective surface on steel surfaces hardened to Rc ≥ 40. The attrition of this media is nearly nil, typically 0.008 percent per hour. Final Ra values are ≤ 4 µinches are usually achieved, and a final step burnishing step removes the conversion coating to leave a clean final finish.

When to Use a Blend of Media

Low DP tooth patterns are easier to refine as the media can more uniformly contact the tooth flank, addendum to dedendum. Tighter pitch pattern gears may be better finished using a media blend.

Tooth addendums project into the media mass and are more easily recessed than dedendums. Therefore, metal removal rates vary from addendum to dedendum. To equilibrate metal removal from top land to root, consider blending two or more media types. Smallish, high-density media with a density of 125 lbs/ft3 falls to the root where its weight is advantageous in applying more inertial force in this recessed location.

Inversely, a large, bulky, lightweight media of polyester plastic composition will bring to bear much less force to the location it contacts. With a density of just 65 lbs/ft3, coupled with a bulky-shape, this media only contacts the gear’s topland and addendum locations. Concomitantly, its light density applies a much lower inertial force in these easily contacted areas, thereby reducing the metal removal rate there and permitting it to match the high-density media metal removal rate in the dedendum and root.

Fluid Retention in the Vibratory Bowl

Smaller media affects the part surface less forcefully, but encapsulates the part uniformly, offering cushioning and a higher quality final finish. Smaller media packs tighter to fill a void space efficiently. There are more void spaces, but they are very small in size and retain fluid in the bowl due to surface tension. This slows mass roll speed and increases the propensity to form fluid geysers. A fluid extraction pump is usually a necessity when small media is employed. 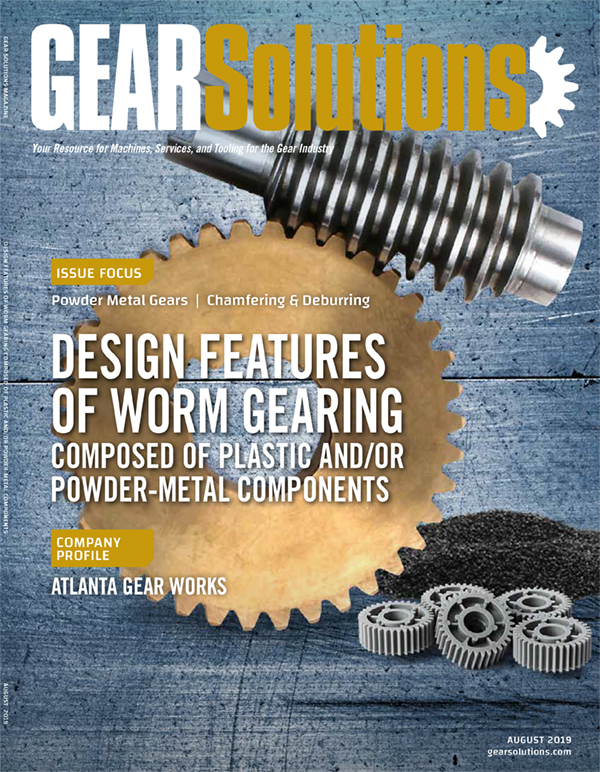 This conclusion of a two-part series on Hertzian fatigue modes discusses...