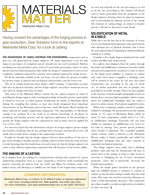 The advantages of using castings for engineering components such as gears are well appreciated by design engineers. Of major importance is the fact that shapes of any degree of complexity and of virtually any size can be produced. Modern metallurgy has also provided a great variety of cast metals, presenting a choice of many physical and mechanical properties that enable the design of components to meet service conditions, conditions imposed by economy, and conditions imposed by design factors.

Of all the materials available in the cast form, cast iron offers the greatest versatility, the greatest range of physical and mechanical characteristics, and the lowest cost.

The art of casting metals into those shapes, called “castings,” is dependent on many basic laws of physical chemistry, and the design engineer can achieve maximum success only when he designs with these in mind.

This series of the Materials Matter column has the express purpose in mind of providing the design engineer with a working knowledge of foundry practice, particularly as related to cast iron, to which general classification the family of Meehanite Metal belongs. In compiling this column, we have also clearly designated those important characteristics of the Meehanite process that have made Meehanite Metal castings the prime material for quality engineering components. The dependability of Meehanite castings is no accident. It is the result of an intimate knowledge of all phases of metallurgy and foundry practice and the ingenious application of this knowledge to provide the design engineer with the component he had in mind, when he applied his own creative effort.

It is sincerely hoped that this information will give the design engineer greater insight into foundry technology than he has, perhaps had in the past, and that this in turn, will enable him to make better castings in his engineering creations.

The Making of a Casting

In its simplest form, the making of a casting involves starting with a pattern of a given engineering component (such as a gear), preparing a refractory mold containing this pattern, removing the pattern from the mold, and filling the resultant cavity with molten metal, and allowing it to solidify into the shape of the engineering component. As each step depends on the one preceding it, as well as on the one succeeding it, this column will discuss each of them; particularly from the standpoint of the design engineer, showing where he plays an important role in determining the ultimate success of the casting. The element of casting design, as related to foundry practice, will also be discussed in some detail.

Solidification of Metal in a Mold

While this is not the first step in the sequence of events, it is of such fundamental importance and is governed by such adamant laws of physical chemistry that it forms the most logical point of beginning in understanding the making of a casting.

Consider a few simple shapes transformed into mold cavities and filled with molten metal:
In a sphere, heat dissipates from the surface through the mold, and solidification commences from the outside and proceeds progressively inwards in a series of layers. As the liquid metal solidifies, it contracts in volume and, unless feed metal is supplied, a shrinkage cavity will be formed in the center. In cast iron, feed metal requirements vary according to the type of metal, viz., its carbon equivalent, and may be gauged, very generally, by its tensile strength. This is because graphite in the structure controls strength and graphite is lower in density, thus a cast iron, high in graphitic carbon content, shows less solidification shrinkage, than one which is lower in carbon content. Feed metal is supplied by risers.

White irons containing carbides, instead of graphite, exhibit 6% shrinkage. Of special interest are the nodular, ductile, or “S” types of Meehanite Metal, which, by virtue of their composition, exhibit from 0 to 1.0% of solidification shrinkage. Extremely soft cast irons exhibit an expansion on solidification and cannot be fed solid by risering. They present special problems, where density is important. The controlled graphitic carbon content, which is inherent to the Meehanite Process, makes it behave predictably and exhibit less solidification shrinkage than any other material of equivalent mechanical properties.

The design engineer must realize that a shrinkage problem exists and that the foundryman will have to attach risers to the casting, or resort to other means to overcome it. Designing for use of lower mechanical properties, where this is practicable, decreases the foundryman’s problem.

When the simple sphere described on the previous page has solidified further, it continues to contract in volume, so that the final casting is smaller than the mold cavity. This causes the need for correction allowance, in order to hold dimensional tolerances. This contraction also relates roughly to tensile strength and is at its highest in white cast irons.

Material pre-treatment as a function of performance