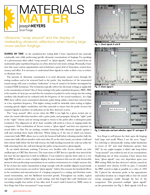 During my time in the nondestructive testing field, I have experienced one anomaly continually arise while performing specific ultrasonic examinations of forgings. I’m speaking of a phenomenon often called “wrap around” or “ghost signals,” which are caused from an undesirable pulse repetition frequency in a flaw detector’s electronic settings. Personally, I have seen this cause various organizations and technicians a great deal of frustration, wasted time, money, and effort. It is necessary to understand these signals in order to find a way to reduce or eliminate them.

The premise of ultrasonic examination is to send ultrasonic sound waves through the testing medium and to be returned back to the probe. Any interference of the transmitted sound energy will cause a resultant “indication” or loss of sound to be further investigated by a trained NDE technician. The technician typically will set the electronic settings as applicable to the examination at hand. One of these settings is the pulse repetition frequency (PRF). PRF is the number of times per second that the transducer is pulsed to excite energy into the testing medium (this should not be confused with the frequency of the actual transducer). At a high PRF, there will be more transmitted ultrasonic pulses firing within a fixed time interval than at a low repetition frequency. This higher setting would be desirable when testing at higher scanning speeds, higher sensitivities, and thin materials to assure that the probe receives the required signals to produce an indication on the flaw detector’s screen.

The “wrap around” effect occurs when the PRF is too high for a given section size or when the sound reflections interfere with a prior pulse, and propagate along the “right” path at the “right” velocity and are strong enough to return to the probe after a subsequent pulse is initiated. The alignment of all of these variables will result in a form of ringing inside the component. This combination of factors creates a “ghost signal” and does not represent an actual defect or flaw. For an analogy, consider bouncing balls (ultrasonic signals) against a wall and catching them (back reflection). When doing so, if the rate at which you bounce consecutive balls (PRF) allows you to catch the bounced ball before releasing another ball, the consecutive balls will not interfere with each other. If on the other hand, you release a ball and then release balls before the first ball returns, the balls heading towards the wall can strike the balls returning from the wall and disrupt the paths (wrap-around or ghost-signals).

In my initial ultrasonic training, I became very familiar with A-scan cathode ray tube oscilloscopes or CRT flaw detectors. The more times a CRT fires in a specific time interval the less time the last signal has to fade in brilliance. I was trained to operate these units at a very high PRF in order to create a brighter display. In some instances this was the only foreseeable protocol when performing examinations in an outdoor environment on a bright summer day. If the section size under examination is large enough, with all variables aligned as previously mentioned, this scenario can result in “ghost signals.” Add to this scenario the beneficial effects in the soundness and microstructure of a forging compared to a casting, and therefore easier sound transmission, and the likelihood increased greatly. Throughout my studies, typical test props included welded plate, small castings, and thin forged discs with thicknesses not exceeding roughly four inches of low alloy steel. It wasn’t until I started my NDE career at Scot Forge that I first encountered “wrap around.”

Scot Forge is well known for their open die forgings both large and small. When I use the term “large,” I’m referring to ultrasonically testing radial thicknesses in excess of 50” and axial thicknesses greater than 200.” As one might imagine, it didn’t take long before “wrap around” was evident in one of my examinations. Duplicating one of these scenarios, I have shown how these “ghost signals” may vary dependent upon your PRF setting. With the flaw detector’s velocity control set at standard steel velocity, 0.2330 in./µsec, I extended the PRF control as high as possible to a value of 1095 Hz. I placed the ultrasonic probe at the approximate mid-radius location on a forged disk so that the sound energy propagates axially through the face of the component. This presented multiple “ghost signals” on the presentation (see Figure 1).

Both signals A & B are classic presentations of typical ultrasonic indications showing a sharp, clear spike on the screen. After the PRF value was manually lowered to 545 Hz, while keeping the transducer undisturbed in the same location, the original “ghost signals” actually disappeared and a new “ghost signal,” “C,” appeared. This is shown in Figure 2.

Finally, the PRF value was manually lowered to the lowest possible setting of 15 Hz with the transducer again remaining undisturbed and in the same location. Under this condition, all “ghost signals” disappeared. Only the initial pulse, signal “D,” and the back reflection, signal “E,” are present on the screen (see Figure 3). The lowered PRF setting also cleared the presentation of irrelevant noise obtained from excessive sound scatter.

An additional approach to verify a relevant (true) ultrasonic indication is to verify the time and spatial positions of the signal(s). In every instance that I have encountered, the ghost signals have been positioned off-center from the midpoint of the testing thickness. Additionally, if a sharp signal is received from one face of a component, then the orientation and location of the signal should be verifiable when tested from the opposite face. For example, if an indication is displayed at 2.5 in. deep within a 10 in. block, a relevant indication should be expected to also display when tested directly opposite (opposite surface) at ¾ of the distance, or 7.5 in. deep. Non-relevant, wrap-around signals would not have this characteristic.

As technology changes with the times, flaw detector manufacturers have taken this phenomenon into consideration. With modern A-scan ultrasonic units, limits have been placed on PRF settings for a given transducer, velocity, and thickness combination. In most cases this eliminates the “wrap around” interference. This does not mean the problem has been completely eradicated because often companies will keep older equipment in service as long as the equipment is functional and capable of the required examinations.

Time and again possible ultrasonic indications have been disproved by the above mentioned methods; often with our customer feeling “caught between” us and their outside testing services with the understandable question of “whom do I believe?”
In summary to verify “wrap around” versus a true ultrasonic indication, be sure to: