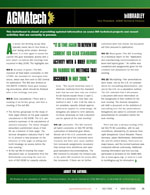 An active ISO Working Group (WG) typically meets two to four times a year during active project development. It is time again to review the current ISO gear standards activity with a brief report on various WG meetings that occurred in May 2006. The highlights are:

WG 2: Accuracy of gears—The WG resolved all final ballot comments on ISO 17485, the standard for bevel gear tolerances, which was then sent to ISO Central for publication. The WG also worked on ISO/WDTR 10064-6, bevel gear measuring procedures, which should be finished after a few meetings next year.

• The Ad Hoc group was for the study of helix angle effects on the gear capacity calculations in ISO 6336. The U.S. presented a summary of its calculations of selected examples. The Italian delegate presented a preliminary study of test life as a function of helix angle. The German delegation indicated that it “will try to present a new proposal on the influence of helix angle on pitting and tooth breakage six weeks before the next meeting.”

• At the full WG 6 meeting the major discussion was on documents from the Netherlands concerning the next revision of ISO 6336 for capacity calculations. “The recent trend has been to eliminate methods from the standard such that we now have only one method for all factors except those of part 1. There is a proposal to now have one method in part 1 and, if all the data is not available, specific default approximations be applied for initial design. All delegates are asked to form opinions on these proposals so that a decision can be agreed at the next meeting.”

WG 12: Lubricants—The WG resolved all ballot comments on ISO/TR 18792, Lubrication of industrial gear drives. Almost all of the U.S. comments were adopted and all of the comments were resolved, but there were some clarification homework assignments necessary that include term definitions and open gear lubrication recommendations. The WG resolved to circulate the revised copy to the active WG members for review after the homework. If there are no further comments after this review, the document will then proceed to publication.

WG 13: Bevel gears—The WG is working on a technical report on the “Application and manufacturing recommendations for bevel and hypoid gears.” An outline was completed and assignments given for the complete text preparation for the next meeting.

WG 15: Micropitting—Two presentations were made, one by the U.S. on considerations for micropitting determination, and one by the U.K. on a calculation method. The U.K. indicated that it will prepare a document with more information on the background of their method for the next meeting. The German delegation will draft a document on the definition of micropitting from the two presentations. Delegations are asked to comment on the presentations for circulation before the next meeting.

There was also a plenary meeting of the full ISO/TC 60 committee, with its sub-committees, attended by 21 persons from eight delegations: Czech Republic; France; Germany; Japan; Netherlands; Switzerland; UK; and the United States. There were no major issues, and the normal business was conducted without controversy. Additional meeting information and how you may participate is provided on the AGMA Web site at [www.agma.org], or send an e-mail to tech@agma.org for information.