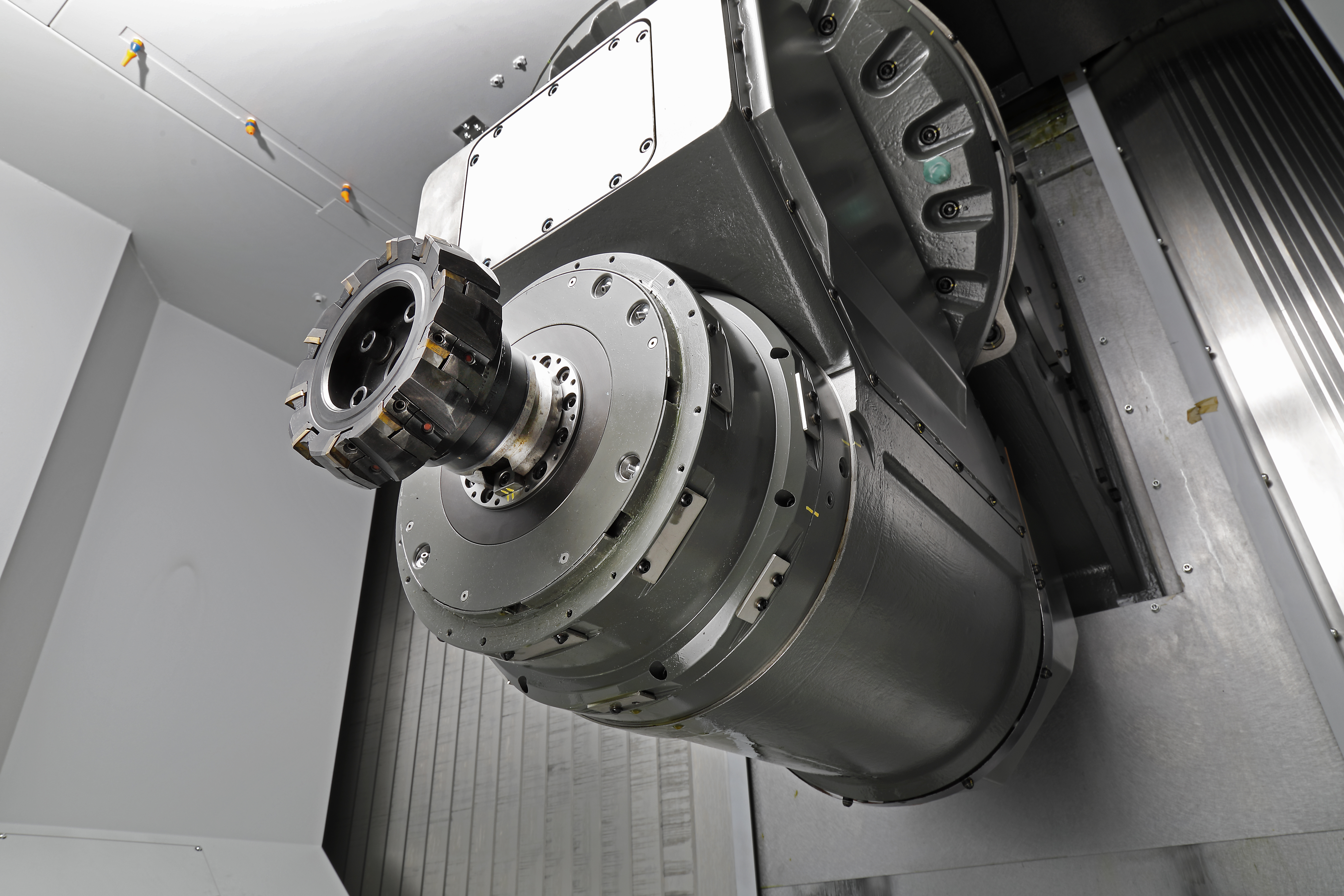 For more than 70 years, JTEKT Toyoda Americas Corporation has been a world leader in machine-tool manufacturing that includes its roots in grinding machine technology to the advanced capabilities of its gear-skiving innovations.

Necessity may be the mother of invention, but for JTEKT Toyoda Americas Corporation, necessity became the catalyst for innovation.

Toyoda Machinery was born from Toyota Motors when the car company was looking to bring the building of machine tools in-house to make car parts.

“We were making machine tools originally for automotive, but then we obviously began selling our machinery to many other manufacturing companies throughout the world over the intervening decades,” said Michael Rzasa, director of Marketing and Sales Strategy at Toyoda.

Over the course of those many years, Toyoda has continued to make many strides in cutting-edge machinery.

“We were the first to invent a high-speed CNC grinding control in the ’60s, when we weren’t satisfied with using a machining/chip-cutting CNC controller for grinding operations,” Rzasa said. “Today, we’ve leveraged our history of grinding controls development and machining center technology to come up with state-of-the-art equipment.”

Toyoda’s complete line of machines ranges from vertical and horizontal machining centers to grinding machines, bridge and gantry machines to turning centers. Toyoda’s products are developed with the operator in mind and use FANUC and Toyoda controls for ease of use and optimal efficiency.

Toyoda’s gear-skiving machinery is built on a platform of the company’s machining centers, but use Toyoda’s grinding controls. Their extremely high-speed synchronization capability allows them to achieve the industry’s fastest gear-skiving machine operations, according to Rzasa.

“Our gear-skiving technology is really the highlight,” he said. “I believe that we have the best specs for skiving in a couple of ways. Our synchronization capability is higher than anyone else that I’m aware of. There are some competitors out there, but I don’t believe anybody else is able to synchronize at 3,000 and 6,000 rpm like we can. We achieve much faster cycle times.”

Toyoda’s machines are not just designed for skiving, according to Rzasa. They serve as a machining center combination with a lathe spindle on top of a rotary table. With this setup, a gear profile can be skived, then a tool can be changed out to skive multiple different gear profiles.

“We can also single-point turn using the work spindle,” he said. “We can chamfer; we can deburr; we can mill; we can drill; we can tap; we can engrave — all in a single chucking of the workpiece.”

This functionality offers many benefits to manufacturers, according to Rzasa.

“In the past, you might need to invest in a line of equipment where you would have a lathe and a vertical machining center and a hob and a deburring robot, for example,” he said. “If any one of those machines is ever down, your entire line is down. Now, we can combine all those operations into one multi-purpose skiving machine. And then, if you need to expand your volume, you just add another skiving machine. If one of your machines goes down, you’re still getting capacity out of the line because you have full redundancy on all operations with multiple skiving machines from Toyoda.”

Having all operations performed by one machine also avoids having to re-setup a part, according to Rzasa.

“You’re saving all of that load and unload time,” he said. “And because you’re not re-chucking it over and over and over again, you’re eliminating any concentricity errors because everything’s true to the center line. So, there are a lot of advantages to the skiving technology.”

With a prime directive of supplying machining centers, cylindrical grinders, turning centers, and gear skiving equipment to manufacturers, Toyoda also sees supporting that equipment as equally important, according to Rzasa.

“We maintain an inventory of over $100 million of machine tools available for immediate delivery,” he said. “And over two-thirds of our staff are in support and engineering roles. We have built our infrastructure not only with machine tools, but also with an extensive inventory of critical spares so that we have parts and service technicians onsite rapidly to keep our production customers operational.”

Toyoda’s dedicated team of engineers are available to create proposals and simulations, and it keeps a gear-skiving machine at its 100,000-square-foot Arlington Heights, Illinois, headquarters facility that’s used for testing, according to Rzasa.

“For example, we just had a customer here who spent 10 days with us doing a battery of performance and tool-life tests in preparation for taking delivery of several machines to their production facility,” he said. “So, they have full confidence in the solution before it ever hits their floor.”

Toyoda also has a huge library of experience dealing with different parts and materials that the company’s staff can rely upon to quickly turn around an estimated cycle time or performance study of a customer’s workpiece, according to Rzasa.

“Our forte was always machining prismatic parts, and we do have the No. 1 market share in the world for OD CNC cylindrical grinders,” Rzasa said. “We would often grind shafts and other components with gears on them but not actually manufacture the gear itself.”

But with the company’s automotive heritage, combined with a heavy demand from its customer base that expressed frustrations in outdated shaping technology, Toyoda saw opportunity. For example, manufacturing limitations forced parts to be designed with more “manufacturability” in mind, rather than part performance. That need helped Toyoda expand into gear skiving.

“Combining our machining-center technology with our advanced control systems was a logical progression for our R&D division. We’ve been developing the gear-skiving technology for over 10 years in collaboration with automotive OEMs,” Rzasa said. “Our first prototype was built back in 2008 in Japan. Since then, one of our best customers is our own JTEKT company, Torsen, a supplier of differentials to major car manufacturers. They’re able to manufacture these differential gears with no undercut in the gear itself, which was required by older shaping techniques. The part is now lighter weight and performs better.”

Similar needs, such as creating lighter parts in order to create better fuel efficiency, was part of what enabled Toyoda to win the Automotive News’ PACE Award in 2017. The award is given to automotive suppliers for superior innovation, technological advancement, and business performance.

“Lightweighting is a huge topic in automotive,” he said. “But outside of automotive, other industries like aerospace are constantly developing new technologies. The F-35 has some very interesting gears going on in its VTOL system that are challenging to make, but are being produced on Toyoda equipment.”

Toyoda’s skiving equipment is not just great for production lines, according to Rzasa, as a company can also get a great return on investment when it’s doing service parts with a high mix of part numbers but low individual part volumes.

“You previously would have to own many kinds of dedicated and expensive traditional gear tooling when running a high part mix. But because of the tool change capability and with quick changeover of the hydraulic chuck on the Toyoda, it’s very easy to have one skiving machine handle thousands of part numbers,” he said. “There’s a big advantage with that.”

Over the next decade, Rzasa expects Toyoda to focus even more on bringing additional 5-axis machining solutions to the market.

“We have a new 5-axis machining center, our FH630SXi 5-Axis, which can be equipped with up to a 100-horsepower milling spindle, full synchronous 5-axis capability, automatic pallet changer, and a large tool magazine,” he said.

Which came first? Toyoda or Toyota?

Despite the slight difference in spelling, Toyoda machinery and Toyota Motors are still tightly involved with one another, according to Rzasa.

“While we were an independent company, Toyota Motors was always our largest shareholder, so we’re still heavily tied to them,” he said. “They’re still our No. 1 customer worldwide. There are hundreds of our machines inside Toyota Motors factories.”

Later in its history, Koyo Bearing and other key automotive suppliers merged to form the JTEKT Corporation, which Toyoda is currently a part of, hence the official name of JTEKT Toyoda Americas Corporation.

Toyoda’s goals in the coming years also involves becoming more cognizant of the needs of production facilities, including high-performance uptime demands, smaller machine footprint, ease of changeover and re-deployment, and the ability to adjust a part on the fly economically, according to Rzasa.

Toyoda will have much of what it can offer the gear-manufacturing industry at this year’s Motion+Power Technology Expo in Detroit, Michigan, October 15-17.

“We’re going to have a display on our gear-skiving technology, and we’d be happy to engage with customers about how it might be applied to their manufacturing parts or processes,” Rzasa said. “We’re also going to have on display one of our cylindrical grinders that shares the same control system.”

The vast history of Toyoda’s award-winning technology has made it a go-to for machine shops, both large and small, but it’s the company’s dedication to versatility, along with a massive inventory, that keeps those customers coming back again and again.

“Toyoda’s heritage is that you buy one of our machines, and it lasts decades, and it has very little downtime, and you can beat the hell out of it, and it just keeps running,” Rzasa said. “That’s what our philosophy is, so we’re never going to stray from that.”