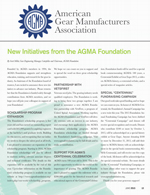 Founded by AGMA members in 1994, the AGMA Foundation supports and strengthens education, training, and research for the gear industry. As chairman of the Foundation board of trustees, I am excited to announce these new initiatives to advance our industry.  Please remember that the Foundation is funded solely through contributions from AGMA members, and we hope you will join your colleagues in support of your Foundation!

SCHOLARSHIP PROGRAM EXPANSION
The Foundation’s scholarship program is five years old and has earned an outstanding report card with $45,000 granted to aspiring engineers at the bachelor’s and graduate levels. Building on this success, and recognizing that our industry needs to deepen the talent pool at all levels, I am pleased to announce an expansion of the scholarship program. Starting in 2016, AGMA Foundation scholarships will also be offered to students seeking relevant associate degrees and technical certificates. The details on this expansion will be available by the end of this year. Up-to-date information on the Foundation’s scholarship program is available on our website at http://www.agmafoundation.org/index.php/our-work/scholarship_program. We hope we can count on you to support and to spread the word on these great scholarship opportunities.

SUPPORT FOR AGMA’S CENTENNIAL CELEBRATION
AGMA turns 100 years old in 2016. This is the perfect opportunity to educate the world on the importance of gearing. The AGMA Foundation is pleased to support this milestone with a $200,000 grant for the historical research and educational aspects of the Centennial Celebration. Foundation funds will be used for a special book commemorating AGMA’s 100 years, a Centennial Exhibit at Gear Expo 2015, a video on AGMA’s history, a centennial website, and a special series of magazine articles.

SPECIAL “CENTENNIAL” FUNDRAISING CAMPAIGN
Our good work takes good funding, and we hope we can count on you.  In honor of AGMA’s Centennial, the Foundation’s Annual Campaign has a new twist this year. The 2015 Foundation Annual Fundraising Campaign has been dubbed the “Centennial Campaign” and donors will receive special recognition and rewards. Donors who contribute $100 or more by October 1, 2015, will be acknowledged on a special history exhibit at Gear Expo. Anyone donating $100 or more by December 31, 2015, will add their name to AGMA’s history with an acknowledgement in the special book commemorating AGMA’s Centennial, and will receive one free copy of the book. All donors will be acknowledged on the special centennial website.  For more details on the “Centennial” Fundraising Campaign, or to learn about other ways to support the gear
industry through the Foundation, please visit www.agmafoundation.org..

Thank you for your generous support!

Dennis Gimpert Receives AGMA’s Highest Honor
At the 2015 AGMA Annual Meeting, The Association bestowed its highest honor, the Lifetime Achievement Award, to Dennis Gimpert, president of Koepfer America. Gimpert has given more than 25 years of dedication and hard work to AGMA, the AGMA Foundation, and all in the gear industry.
Gimpert has spent almost his entire working career as part of the gear industry. In 1974, he began his career in the gear industry with Barber Colman, Machine Tool Division, as an application engineer for gear shaping and hobbing equipment.  From 1976 to 1988, he was vice president of marketing for American Pfauter.

In 1988, Gimpert began with Jos. Koepfer & Sohne GmBH as president of their North American operations. It was a small operation, and as Gimpert said, “It was just me and Klaus [Korth]. ‘I’m gonna go sell something. You go fix something.’ And the company just started.”  From those beginnings Kopefer has grown to 12 employees and a strong presence in the U.S. market. Beyond Koepfer products, it offers Tyrolit MIRA grinding & honing tools, Helios gear cutting tools, Monnier + Zahner gear hobbing and worm milling machines, CLC large gear hobbing, shaping, milling and deburring machines, remanufactured & used machines, and hob sharpening services.

Gimpert has been a longtime supporter of AGMA and got Koepfer involved almost right from the company’s inception. Over the years, he has served on just about all of AGMA’s business committees – the Trade Show Advisory Council, Marketing Council, ADEC (predecessor to the BMEC) and as the Chairman of the Education Council. Gimpert was awarded the Administrative Division Executive Committee Award in 2000 for his involvement with the gear school and the creation of online workforce training programs that are still in use today.

Gimpert went on to be elected to the AGMA board of directors and he served as Chairman in 2008-2009. While involved with the board of directors, he was responsible for studying the AGMA headquarters location and real estate options. Gimpert’s study laid the groundwork for the purchase of our current headquarters location and assured AGMA a permanent home. The office will serve the association for many years to come.

After his service to the AGMA board of directors, Gimpert continued to assist the industry, this time as a member of the AGMA Foundation board of trustees. He also chaired the Foundation from 2011-2014.  Under Gimpert’s leadership the Foundation ramped up into scholarship program, which just last year gave $25,000 in scholarships to students pursuing careers in the gear industry.

“Dennis is one of the more proactive and accessible leaders in the AGMA. Dig into a successful project and more likely than not, you will find his fingerprints,” Joe Franklin, Jr., AGMA president, said. “The Association would not be where we are today on education programs were it not for his vision and leadership. He led the team that investigated where AGMA should be located for the future and supported the decision to purchase the office space we now have. This as much as anything helped secure AGMA’s legacy for years to come. His impact on the industry spans decades, and I know he’s not out of ideas.”

AGMA Announces New Board Chairman and New Board Members
At the 2015 AGMA/ABMA Annual Meeting, AGMA welcomed a new chairman, treasurer, and four new board members to the Association’s leadership. Dean Burrows (president of Gear Motions, Inc. in Syracuse, New York) will serve as chairman of the AGMA board of directors for a two-year term, ending at the 2017 Annual Meeting. Dean will replace outgoing Chairman Louis Ertel (chairman of Overton Chicago Gear Corporation, Chicago, Illinois).

Burrows joined Nixon Gear in June, 2008 as its president. In 2010, Dean assumed the responsibilities of vice president for Gear Motions, and in 2013 he was named president. Prior to his work with Gear Motions, he was the vice president of operations at Marietta Corporation in Cortland, New York. He worked for Carrier Corporation, a division of United Technology, and served as the director of supply chain for Carrier Corporation’s Residential Light Commercial International Division from 2000-2007. Burrows has extensive international experience and lived in Paris for three years while leading the acquisition integration.

Before working for Carrier, Burrows worked for Delphi Automotive, Acro Industries, and Bausch and Lomb. He has over 25 years of operations experience from various industries including automotive, medical device, and consumer products.

Burrows has both a Master of Engineering Management degree and a Bachelor of Science in Industrial Engineering from the Rochester Institute of Technology. He was most recently the treasurer of the board of directors for AGMA and has served with many AGMA committees including the Strategic Resources Committee (SRN), the Annual Meeting Committee, and the Education Committee. He is also working with AGMA on its yearlong Centennial Celebration which will take place in 2016.

“Dean Burrows is the right leader for AGMA as the industry association closes its first 100 years and moves into the next,” said Joe Franklin, Jr., AGMA president. “Dean is a strategist with a broad global view of the industry. Dean also continues the long history of Gear Motions with AGMA.  The Haines family, founders of Gear Motions, has been in the leadership for several decades. I am sure the family and employee owners of Gear Motions are proud to see this continue,” Franklin stated.

AGMA Recognizes Up-and-Coming Talent with Next Generation Award
The Next Generation Award was created to recognize innovative work by an individual responsible for one or more significant achievements in work that has enhanced or strengthened the gear industry and AGMA.

This year’s Next Generation Award was presented to Nitin Chaphalkar, manager of advanced solution development at DMG Mori Seiki, USA during the 2015 AGMA Annual Meeting.

Although Chaphalkar has worked with DMG Mori Seiki for several years, only recently has he focused on the gear industry. Prior to that, Chaphalkar area of concentration included new technology strategy and development, new product introduction, strategic market development, and product management.

Chaphalkar became involved in AGMA just as DMG/Mori Seiki USA joined AGMA. He has been active on the Annual Meeting Planning Committee for the past two years, as well as the SRN. He also co-authored and presented a technical paper at FTM 2013 titled “Analysis of Gear Root Forms: A Review of Design, Standards and Manufacturing Methods for Root Forms in Cylindrical Gears.” Additionally, he has presented at the Gear Expo Solutions Center and contributed articles regarding gear manufacturing over the past few years.

Chaphalkar is very passionate about the gear industry and the role of multi-tasking machines in gear manufacturing,” Chaphalkar’s supervisor Gregory Hyatt said in a letter nominating him for the Next Generation Award. “Making gears on multi-tasking machines is a disruptive change in the marketplace and Nitin has been a key catalyst for it. One needs to have entrepreneurial acumen and persistence to go about that change. Nitin’s contributions to the industry have not only been on the commercial side but on the technical side as well.”

The Fall Technical Meeting Connects With Gear Expo in Detroit

When does the gear industry recover?

A Historical Perspective on Change

Gear education is a necessity now, more than ever