There has been much discussion regarding the surface treatment of gear power transmission systems using the nitriding process. Much of the past discussions have centered on the suitability of the process results because of the potential for high surface hardness results and the impact value of the nitrided surface. This presentation will discuss: • Materials for gears for nitriding • Process control • Process method selection • Testing and interpretation of results With these objectives in mind it is the intention of the writer to demonstrate the advantages of the nitriding process for the surface treatment of gears.

The traditional methods of nitriding are based on deriving a source of nitrogen from a gas or compound. The two common sources of nitrogen are ammonia for gas nitriding, and cyanide to cyanate decomposition for salt bath nitriding. The gaseous method of nitriding is based on the simple decomposition of ammonia to its nascent forms: 2NH3 N2 + 3H2 (1) NH3 → 3H + N  (2) 2N → N2  (3) 2H → H2  The atomic nitrogen and hydrogen components shown in equation 1 are unstable and will unite with other like atoms to form a molecular bond as shown in equations 2 and 3. It is while they are in the atomic state that diffusion will begin to occur.

Nitriding temperatures are low in relation to most other surface treatment procedures. Gas nitriding temperatures can range from 486° C to 550° C. This, of course, will be dependent on the steel’s pre-heat treatment and core hardness. The major advantage of the low temperature procedure is that of reduced distortion. That is not to say that distortion will not occur, because it will occur in terms of growth and induced stress machining. However, the growth is uniform in all directions and is dependent on the total case depth and the thickness of the surface compound layer.

Composition of the Compound Layer

The compound layer is exhibited as a white colored area on the immediate surface of the nitrided steel when the sample is nital etched for microscopic examination. The typical compound layer is made up of two phases—epsilon nitride, and gamma prime nitride [2]—and the phases are generally equal by volume; 50 percent + 50 percent. The layer composition will be affected by the carbon content of the steel, as well as the process gas decomposition ratios. If the compound layer is dominant by the epsilon phase, then the surface will exhibit high surface hardness values but with low impact values. In other words, the surface will be brittle and will not easily withstand high impact, cyclical load values. If the steel chemistry includes aluminum up to 1 percent, then a similar effect will occur. In this instance the diffused nitrogen will react with the aluminum to form extremely hard aluminum nitrides that are not capable of withstanding high cyclical impact loads. The failure mechanism will start with surface crack propagation, followed by the nitride case crushing, and then the nitride case spalling. It is therefore most important when selecting a steel for gear design not to select one with aluminum present, as this will create very high nitrided surface hardness values.

The “gamma prime” phase will exhibit lower surface hardness values, but with much higher impact values. The time at temperature, the process temperature, and the gas dissociation value will determine both the thickness and the composition of the phases of the compound layer when using gas nitriding. With the process of ion nitriding the time, temperature, and process gas composition are variable and can be adjusted to suit the surface metallurgical requirements of the gear.

From the gear design and performance perspective, the material selection is critical to success. It has been said that in order to nitride, special steels are required. While that may be true in general, it is not critical. The determining factor will be how the core hardness of the substrate material will respond to the preheat-treatment necessary for case support, machining, and strength.

Steel that contains one or more of the alloying elements chromium, molybdenum, vanadium, tungsten, aluminum, or silicon are helpful in forming stable surface nitrides. Iron is also a nitride forming element. It is also necessary to have carbon present in order to improve the hardenability of the core. Generally the carbon range is between 0.30 and 0.40 percent. However, the higher carbon values will tend to promote the epsilon nitride formation in the compound layer of the formed case. The steels that can be effectively used for gear manufacture can contain any or all of the previously mentioned elements. It must be remembered that it is also necessary to have sufficient carbon present in solution in the steel to assist in forming tempered martensite when the steel is pre-treated prior to the nitride procedure (see Figure 3).

In addition to establishing the mechanical properties required of the steel, it is necessary to establish the appropriate grain size. The coarse grain material will develop a deeper case than will the fine grain material. Generally the targeted size should be ASTM 6 to 8 (32 to 128 grains per square inch) [2]. If the grain size is coarser than, say, ASTM 6, then the mechanical properties—particularly impact—will begin to deteriorate. A typical core hardness value will be 320 to 400 Brinell or 340 DPN to 430 DPN or 34.5 HRC to 44 HRC. One also has to consider the other mechanical properties such as impact, tensile, and yield point. Figure 4, Table 1

Unlike carburized gears, nitrided gears do not require significant case depths. The depth of case will of course be dependent on alloying elements, time, and gas dissociation. It can be said that the higher the nitride alloying element content, the higher the resulting surface hardness, but the shallower the resulting case. Elements such as chromium, tungsten, vanadium, and molybdenum, which are strong nitride formers, will retard the nitrogen diffusion, thus necessitating longer cycle times. The case depth requirements are based upon the diametrical pitch (DP) of the gear.

The case depth should be measured by a microhardness test unit using a 200 to 300 gram load with either a Vickers Diamond or Knoop diamond indenter. The case should be measured to effective case at a hardness value of 513 Diamond Pyramidical Number (DPN) Vickers or 50 HRC or total case. The transition zone or total case from effective case is that hardness value which is the core hardness plus 50 DPN points (or 5 HRC) higher than core hardness.

The uniformity of case depth on a nitrided gear will be determined by the diametrical pitch in relation to the gas species activity. In salt bath nitriding of gears the salt is in full surface contact with the gear surface, which means that no matter what the DP of the gear might be, the uniformity of case formation will be good. In the case of pulsed plasma ion nitriding, the uniformity of case formation will be determined by the process partial pressure selection, current density, and process voltage selection. As can be seen from the graph, the current density can vary significantly with the pressure so does the current density. It is therefore necessary to accurately control both the process pressure and the process power input to ensure a uniform case formation around the gear tooth profile. Figure 5, Figure 6

In addition to controlling the process pressure to ensure a uniform case formation, it is necessary to control the pulsed power duration. This now means controlling the following pulse voltage, pulse power duration, and pulse power off time. It is therefore necessary to control process parameters of the pulsed plasma Nitriding procedure accurately by the use of a computer/PLC combination. The control of the process partial pressure will ensure good root penetration of the gear tooth during the ion nitriding cycle, as well as splines, keyways, and bores.

The use of the pulsed DC power means that the plasma current can be interrupted, rather than be a continuous DC current as is used in the older, more-traditional methods of plasma nitriding. The ability to pulse the power means that the possibility that exists with continuous DC power for arc discharging is eliminated. The power to discharge the arc is not allowed to build up. This is accomplished by simply switching the power on and then off. The power interruption time is variable, as is the power on time. This means that the power selection can be made to sit the part geometry from simple geometries to complex geometries. Therefore, two more dimensions of control are now added to enable the metallurgist to set and accomplish a consistent process with repeatable results. They are:

The use of the process of ion nitriding has opened the way to a more precisely controlled surface metallurgy on nitrided gears. The present use of the hot wall pulsed plasma nitriding method now allows metallurgists the ability to prevent arc discharge and over heating experienced with the traditional methods of continuous DC plasma generation. The ability to manipulate the plasma glow by partial pressure adjustment to follow the tooth profile reduces the risk of non-uniform case formation in the tooth root.

Pulsed plasma ion nitriding is a proven technology that offers clean processing with no toxic effluent on precise process control, controllable surface metallurgy, and a broad temperature operating band to reduce the risk of distortion and surface growth. 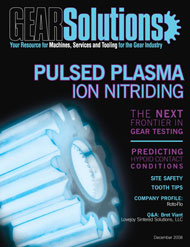