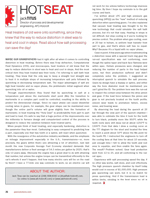 Maybe our grandfathers had it right after all when it comes to controlling distortion in heat treating. Before there was X-ray defraction, Computational Fluid Dynamics (CFD), and microscopes, heat treaters of old knew that the way to reduce distortion in steel was to heat and cool in steps. And the most critical item they heat treated was their tools. I’m referring to salt bath heat treating. They knew that the only way to keep a straight tool straight was to heat it in multiple steps of increasing temperature salt pots followed by quenching in decreasing temperature salt. The major advantages of salt are high heat transfer and no vapor phase, the problematic initial segment when quenching into oil or water.

Through experimentation they found that by quenching in salt at a temperature just above the martensite start point (Ms) the transition to martensite in a complex part could be controlled, resulting in the ability to predict the dimensional change. Since no vapor phase can cause dissimilar cooling rates in gears, for example, the gear shape can be maintained even though the entire part’s volume will grow slightly from the formation of martensite; in heat treating the “Holy Grail” is predictability from part to part and load to load. It’s safe to say that a huge portion of the improvements over the millennia to furnace design and computerized control of the process is designed to reduce the variation between heat treated parts.

When people think of heat treating, and especially hardening, distortion is the parameter they fear most. Carburizing is easy compared to predicting how a part, especially one that has teeth or a spline, will react when quenched.

With the resurgence of the automotive industry worldwide, and the emphasis on mileage improvement especially in the U.S., transmissions—or, more precisely, the gears within them—are attracting a lot of attention. Just last month the new Corporate Average Fuel Economy standard demands that manufacturers deliver a fleet average of 54.5 miles per gallon by 2025; that’s only 13 years away. Obviously the engine has a great deal to do with attaining that number, but unless the engine torque can be transmitted efficiently to the car’s wheels it won’t happen. And how many electric cars will be on the road by then? I have a 77-mile one way commute to work, so an electric car will not work for me unless battery technology improves big time. By then I hope my commute is to the golf course and back.

I’ve written about LPC and high pressure gas quenching (HPGQ) as the “new” method of reducing distortion when quenching gears. I’ve also explained that vacuum heat treating was thought to be the new technology that could simulate the salt bath process, but it’s not that easy. Heating in steps is not difficult, but step cooling is if you’re looking for precise control. The problem when gas cooling, even at 20 bar in helium, is uniform heat transfer from part to gas, and that’s where salt has no equal. Why? Because it’s a liquid with no vapor phase.

Case in point: A few years ago when troubleshooting a distortion issue with a special truck ring gear the run-out specification was not conforming, even though the spline taper and back face flatness were within spec. Helium pressures were changed, and reducing the number of parts in the load helped some, but then production suffered and didn’t completely solve the problem. I suggested an interrupted quench to simulate the salt process. Gears by design have a keyway or spline, and either way the bore diameter must be maintained; you can’t grind the ID. The problem here was the run-out to inspect the contact area between the drive pinion and gear. If the load force between the pinion and gear is not precisely located on the tooth profile, uneven wear leads to premature failure, excess noise, and bearing wear.

By observing the load during the quench at 20 bar through the view port of the quench chamber I was able to estimate the time it took for the teeth to turn black, probably more like 950°F, while the teeth roots were still deep red at about 1250°F to 1300°F. From that data I drew a cooling curve on the TTT diagram for the steel and located the time to reach a point about 50°F above the Ms point for the teeth PD. I instructed the engineers to turn off the cooling fans at that time for about 10 seconds, just enough time I felt to allow the teeth and root area to equalize, and then enable the fans again. The result? Problem solved. Gear load production went from 12 to 25, and all conforming to the run-out spec.

Experience with salt processing saved the day. If no other way works, salt does, and cost effectively. The high pressure quench chamber by itself today would cost in excess of $1,000,000. High pressure gas quenching can work, but it is no match for press quenching. And if the transmission load is within limits, nitriding is the best since no oil is required. 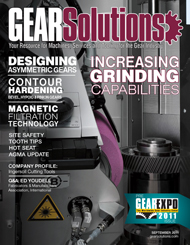