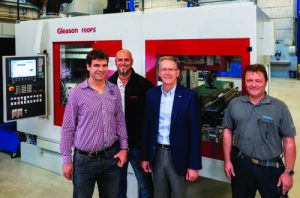 The new Gleason 100PS Power Skiving Machine: first results are in with an installation at Güdel AG, Langenthal, Switzerland, a leading worldwide manufacturer of machinery and factory equipment, with particularly strong manufacturing and process automation capabilities.

Güdel and Gleason-Pfauter Studen have long cultivated a relationship as suppliers and users of each other’s products. Currently, Güdel is producing gear components on Gleason machines, and we are integrating Güdel automation systems in our products. In February, 2013 a team of management, purchasing and sales personnel from Gleason Pfauter Studen visited Güdel in order to exchange information and discuss various subjects of mutual interest. In these discussions we learned that Güdel was facing serious problems with one of their old hobbing machines, and had started a project to replace it. In the course of further meetings it became clear that the machine Güdel was looking for had to cover a wide range of components, produced with different processes. No single ‘off-the-shelf’ machine was suitable. The most important application was the skiving of worm shafts, ranging from 1 to 10 starts. It became clear to us that our new Gleason 100PS Power Skiving Machine would be the perfect candidate to meet Güdel’s requirements. Soon, we began testing the process in trials and it proved to be capable of delivering the required results. This was a challenging process. The feasibility of manufacturing processes like hobbing of pinions, skive hobbing, hobbing of worms and worm wheels and milling of worms were studied. Ultimately, these studies and trials showed that, with some mechanical modifications and programming software development, the 100PS could fulfill Güdel’s ambitious requirements.

Güdel ordered the 100PS shortly thereafter. We decided to define the workholding and additional accessories, including the customer’s request to continue to use some of his existing workholding with the new machine. As expected, software development was one of the biggest challenges, given the complexities of the many operations and workpieces. The software development started first on a simulator and was installed on the machine later. Pre-acceptance trials were conducted in several steps to show the progress we were making. We are now in the final stages of installation and the start  of  production.

It is projects like these which allow us as a company to progress and lead to new developments for the future machine generations.