Extruder machines are employed primarily to manufacture thermoplastics including larger-profile products such as bars, PVC pipes, and hoses. They come in single-screw and twin-screw varieties; the majority are single-screw.

The single-screw extrusion process works as follows: The plastic raw material is fed from a hopper or feeder into the extruder barrel. The extruder’s heater melts the material in the barrel, triggering a chemical reaction. A screw located in the barrel rotates at a constant speed, propelling the melted material forward. Speeds in single-screw extruders are normally low, ranging from 25 to 450 rpm (or r/min).

Power to drive the screw is supplied by an electric motor through a gearbox. The extruder gearbox provides the torque needed to overcome the friction of the raw material and to reduce the speed of the electric motor. A nozzle at the end of the barrel gives final shape to the plastic material.

Friction generated by the melting material when forced through the nozzle of the extruder increases pressure inside the barrel and induces an axial load on the screw. The magnitude of axial load depends on parameters such as screw geometry, feed rate, and the type of material. The axial load is accommodated by a thrust bearing, which is normally mounted on the output shaft of the gearbox. Radial loads are accommodated by two radial bearings.

The basic operation of twin-screw extruders is similar to that of single-screw machines, with one important difference: twin-screw extruders have two intermeshing screws that rotate in the same direction (co-rotating) or in opposite directions (counter-rotating). Co-rotating machines provide additional mixing power, whereas counter-rotating machines generate a smoother, more consistent end product.

Twin-screw extruders operate at relatively low rotational speeds of up to 1,200 r/min. They are driven by parallel-shaft gearboxes that have two output shafts instead of one. Axial loads induced on both screws are supported by thrust bearings on the gearbox output shafts.

Application requirements for thrust bearings in single- and twin-screw extruders include:
High dynamic load ratings—Higher barrel pressures in extruders translate into faster extrusion and higher output as measured in kilograms or tons per hour. However, these pressures also create higher axial loads and require bearings with higher load ratings.

Ease of mounting/dismounting — This is an important consideration. Manufacturers of extruders and gearboxes should be able to quickly install thrust bearings during assembly. If a bearing becomes damaged, quick dismounting followed by fast and reliable installation of a replacement bearing is critical for minimizing costly downtime.

Spherical roller thrust bearings are the only true roller thrust bearings designed to accommodate heavy axial loads in combination with radial loads. This ability to handle combined loads permits space-saving machine designs that provide a high degree of stiffness under heavy load. The SRTBs‘ internal geometry — including favorable roller end/flange contacts—optimizes lubricant film formation, enabling the bearings to perform efficiently at low speeds and in poor lubrication conditions. In addition, SRTBs are self-aligning. Depending on operating conditions and the bearing series, they can accommodate misalignment of up to three degrees between the shaft and housing without adversely affecting performance.

Modern, state–of–the–art spherical roller thrust bearings have less internal friction than other thrust bearings on the market, including tapered roller thrust bearings. They are characterized by optimized geometry in the flange contact area, an important feature in applications with high axial loads. Manufacturing tolerances and surface finishes have also been improved. These advances enable modern SRTBs to provide good load distribution at the contact area while keeping friction at acceptable levels and maximizing lubricant effectiveness.

In tests that simulate gearbox environments, SKF has confirmed that these specially hardened bearing steels exhibit improved wear resistance compared with standard bainite-hardened steels. In addition, the specially hardened steels have a period of crack propagation in advance of failure, providing ample warning and allowing users to change out bearings before catastrophic failure occurs.

Fast oils that are highly agitated tend to produce the highest rates of distortion while slow or marquench oils tend to minimize distortion. Quenching in still (non–agitated) oil is often used as a means of distortion control on critical parts.

In twin-screw extruder arrangements, bearing stiffness is a key design consideration. The two intermeshing screws must be precisely controlled to prevent contact during operation, which can result in costly damage. One output shaft is equipped with a standard thrust bearing, while due to space limitations the other has a multi-step thrust bearing. The two arrangements differ with respect to axial stiffness, a difference that must be accounted for during the design phase.

Lubricant viscosities in single- and twin-screw extruder gearboxes normally range from 320 to 460 cSt. Because of their internal design, spherical roller thrust bearings generate a pumping action, which can be utilized to improve oil distribution to surrounding gearbox components.

Operating temperatures at bearing locations are approximately 50 °C to 60 °C. Insulation is required to prevent the heat of the extrusion process from affecting the thrust bearings. Increased heat can have a negative impact on bearing lubrication.

When installing spherical roller thrust bearings, it is important to follow accepted bearing installation procedures. Housings, shafts, and other components in the bearing arrangement should be thoroughly cleaned, and bearings should remain in their original packaging until immediately before mounting.

The housing washer is mounted with a radial clearance of approximately 1 mm in the housing. If the bearing is unloaded, the housing washer can move under its own weight. Problems can occur if a minimum axial load is not applied to the bearing at all times. To avert problems, spherical roller thrust bearings are normally preloaded with springs.

For more detailed installation instructions, or more on the use of spherical roller thrust bearings in extruders, contact your bearing manufacturer for assistance. 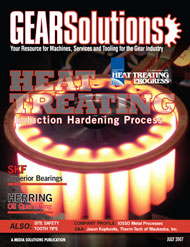