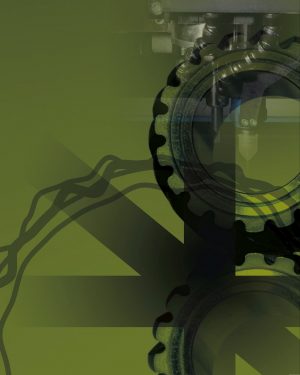 In the history of machine tools, spindles have been very good relative to other bearings and structures on the machine. So quality professionals have developed a cache of tools—such as ball bars, grid encoders, and displacement lasers — to help them characterize and understand the geometry of the whole structural loop. This makes sense, as this is where the majority of the errors could be found. But as machine tools have improved in their capability and precision, and the demands of part-geometry and surface finish have become more critical, errors in spindles and rotating worktables have become a larger percentage of the total machine error. This is especially true in the manufacture of gears and bearings, because small errors in the work and wheel spindles have large effects on part profile and surface finish.

Once you’ve done all you can to improve the stiffness, damping, geometry, and thermal stability of a machine, and the machine operator is using the best machining practices, the next frontier is to study the errors in the spindles. The ultimate roundness and surface finish that may be achieved by a precision metal-cutting machine tool is determined by the performance of its spindles. By characterizing and routinely checking spindles, part quality can be predicted and controlled.

The focus of this article is to summarize the framework already established for using spindle metrology to deterministically improve manufacturing processes. As a bonus, and something the pioneers of spindle metrology would all be quick to point out, spindle testing — which is defined in the standards now as “tool to work” — is also an excellent new diagnostic tool for other error sources in the machine. Most importantly, these standards are the ones used to qualify roundness and gear measuring machines, so they offer insight into manufacturing equipment as we try to improve the quality of bearings and gears.

The standards which most-specifically refer to the quality of precision spindles are ISO-230-7, “Geometric Accuracy of Axes of Rotation,” and ASME B89.3.4-1985, “Axes of Rotation, Methods for Specifying and Testing.” These standards are based on the concept of an “axis of rotation,” which is defined as a line segment about which rotation occurs. Spindle “run out” is an often-used term, but it is not consistent with standards for describing spindle precision. Surfaces have run out; axes have error motions. There are three basic spatial error motions in spindles: radial, axial, and tilt (see Figure 1). We will see later that spindle error motions are also characterized by frequency and by sensitive direction.

Over the last 50 years, axis of rotation metrology has developed into a standard for characterizing spindles and understanding the capabilities of a machine. The measurement technique involves high bandwidth, non-contact capacitive sensors with nanometer-level resolution. The sensors reference precision pins or spheres that are mounted to the rotating spindle as targets. So with a three-probe system — two probes arranged radially at 90° from each other, and one axially centered on the axis for X, Y, and Z — a point may be referenced in 3D space. A five-probe system (Figure 2) with two spherical targets may reference two points, and so tilt errors of the spindle may also be known.

The signals from these five probes each represent a fire hose of information about the spindle’s performance, recording spatial errors and clocking them by frequency. Data can be taken at over 100,000 rpm, or less than 1 rpm. The signals may be viewed on an oscilloscope and run though Fast Fourier Transform (FFT) and/or software used to conceptualize the results (Figure 3). Because the spherical artifact is difficult to perfectly align with the axis of rotation, it will have an eccentricity. This eccentricity may be used as a tachometer to phase the data streams with the rotation of the spindle when an encoder is not conveniently available, and represents an error that is easily subtracted out, as a roundness measuring machine would. This technique allows for phasing a linear data stream (Figure 8) into polar plots (Figure 4, Figure 6,7).

After subtracting out the eccentricity mentioned previously, and averaging asynchronous motions, we have what’s called “synchronous error motion” (see Figure 5 for explanatory models). In most cases this would be considered the spindle error motion. In cases of very high precision spindles, where the 25 or 50 nanometer errors in the target become a significant percentage of the total error motion, another measurement procedure called “Donaldson Reversal” may be employed to subtract out the errors that are in the target.

Synchronous (average) errors are clearly illustrated in plots of air and hydrostatic spindles as the error repeats exactly every time around (Figure 6,7). This is in large part due to the fact that there is just one rotating element. Error motions in air bearing spindles are often less than 25 nanometers, or one-millionth of an inch. In such a case Donaldson Reversal would be a necessary methodology, as the error motion of the spindle is likely less than the non-roundness of the target.

At higher speeds unbalance, which results in vibrations that you may think would affect surface finish, actually does not. Unbalance causes a once per revolution disturbance that is repeatable. It is a synchronous error. If you have a gear that is not balanced on the worktable and you finish the inside diameter, it may have good surface finish and roundness, but when you slow the spindle down the whole will be eccentric.

With capacitance probes it is possible to measure the eccentricity (run out) of the turned surface at different speeds. With perfect balance the radial load on the spindle does not change with speed, so there would be no run out at any speed. In a different situation, the unbalance of a grinding wheel spindle will have a surface finish effect determined by the relative speed of the spindle and workpiece.

Fundamental synchronous and asynchronous axial motion is measured on the axis of rotation. It is very important when flatness or form at the center of the part is critical. This would be the case in manufacturing optics. The face motions are measured some noted distance from the center, and they would be the same as the axial motion in the absence of tilt motion. These errors would be evident on large diameter conical gears. Because they are both measured on the face, both are axial motions, so they cause flatness or profile errors when facing flat or conical parts.

However, fundamental axial face motions will create a part that has the property of circular flatness; that is, the overall surface is not flat but provides a “flat sealing surface” at any given radius. If you were to put the part on a roundness checker and measure flatness at some radial distance from the center, you could adjust the part into reading flat at that radius, but the flat surface will not be perfectly square to the axis it was turned on, or that the reference surface the part was chucked on. This may be acceptable for a sealing surface, but it would not be a good thing for a bearing surface or gear interface.

The utility of measuring error motions in spindles became evident as hydraulic systems were being applied to military aircraft. Leaky hydraulic fittings were a maintenance headache and a fire hazard. A study by the military to improve the effectiveness of taper seals revealed that residual face motions of spindles making tapered seals would compromise the geometry of the tapers produced and its ability to seal. Bevel gears are very similar to conical seals, but since they have larger diameters the amplitude of the errors will be larger.

Residual synchronous face motions are motions left over after the fundamental — or “once around” — errors are subtracted. They are still synchronous, but they are at other integer multiples of the rotation frequency. Residual face motions result in parts that are not flat at all, not even circularly flat. Controlling the property of residual face motion is critical whether you are making seals or bearing races, and because tilt is involved, this is especially true with large diameters.

As noted previously, asynchronous error motions are a predictor of surface finish, and they are best illustrated in error motion plots of rolling-element bearings. Because rolling-element bearings have “constituent elements” (rollers, inner race, and cages) that are not perfect and have different rotational frequencies, error motions of the spindle appear random. They are not actually random. The determinist viewpoint is that they can be predicted. In rolling-element spindles, these asynchronous motions are generally much larger displacements than the synchronous motions (Figure 4, Figure 6,7). Over many revolutions the polar plot develops into a fuzzy band, and the thickness of this band represents the asynchronous error motion of the spindle. This band is likely to be 100 nanometers wide in the very best rolling-element spindles, 1000 nanometers (1 micron) in good spindles, and 10 microns or more in 500mm or larger diameter bearings. This is why gear manufacturers may see variability in gear teeth profile errors when a large gear is ground or gashed using only a few revolutions, as opposed to many revolutions, in a turning operation.

The linear plot (Figure 8) shows how the different elements, with their different rotational frequencies, produce what appears to be non-repeatable motion in the summation of their signals (top). The portion of the signal that is asynchronous is the determinant of surface-finish capability. The error motions do repeat though after many revolutions, and they can be predicted. An analogy can be made with the sun, which rises differently each day but is, after many rotations, repeatable.

The Fast Fourier Transform (FFT) is the most common method for separating the frequency components of a signal. An example of this can be seen in Figure 9 for a single row, deep-groove bearing. Note that the cage, ball pass, and outer race frequency spikes are identified in the chart.

Rolling element bearings can have nanometer — one thousandth of a micron — repeatability when turning though angles of less than 360 degrees and then returning to the starting position. This is because, in less than one revolution, the constituent elements do not precess. That is, all of the components come back to their original locations with respect to each other.

So what are the important takeaways from this information for gear manufacturers? First, take care that the error motions of your spindles are not limiting the quality of your gears. The synchronous error motions of your workholding spindles will determine the roundness, flatness, or global tooth profile of the parts you manufacture. Residual face error motion of work spindles can cause flatness and profile errors, too. Surface finish is dependent on the asynchronous error motion of both the work spindle and the grinding wheel spindle. Dramatic surface finish improvements can be made by characterizing and improving spindles using axis of rotation metrology. 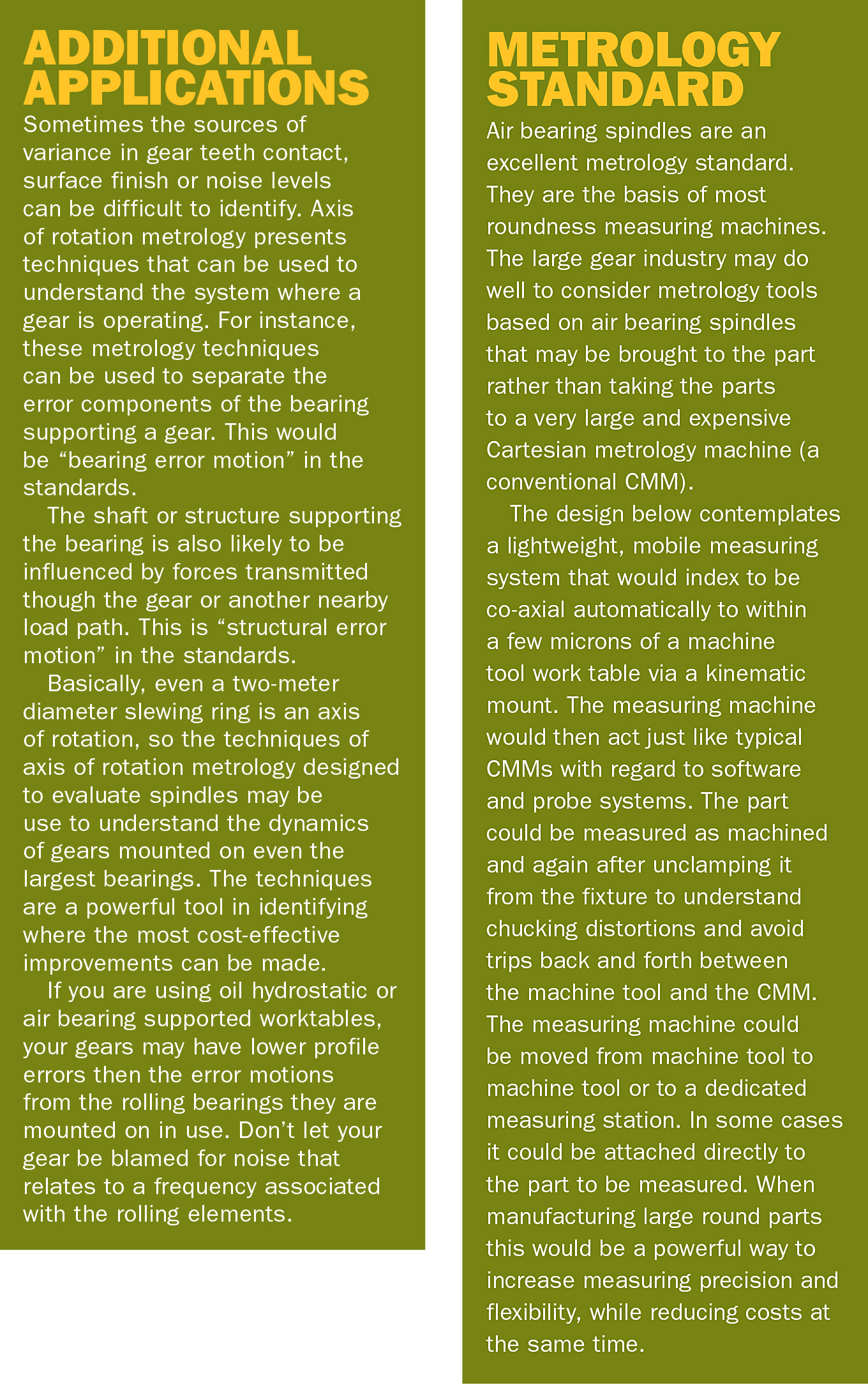 The author would especially like to thank Jim Bryan, a precision engineering consultant with Bryan Associates, and Eric Marsh — a professor of mechanical engineering in the Machine Dynamics Research Laboratory at Penn State University — for their effort and input in this work.

Why selective plating stops gears from grinding to a halt