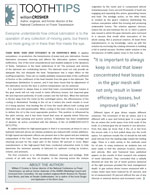 Today, more than ever, efficiency is on everyone’s mind. It applies everywhere—in production, the transmission of power and, yes, lubrication. Excess lubrication increases churning and affects the lubrication system, increasing inefficiency. One of the most misunderstood and studied subjects is the dynamics of fluids. Turbulence is the least understood of all. The pressure and velocity of the lubricant are contributing factors. The lubricant must not only provide an adequate film, but dissipate the heat. Temperature has a major effect on the scuffing properties. There are no readily available measured data of the coefficient of friction or the coefficient of the heat transfer from the gear to the lubricant. The temperature distribution is uneven, and it has been found that by adjustment of the lubrication across the face a uniform temperature can be achieved.

It is important to always keep in mind that lower concentrated heat losses in the gear mesh will not only result in lower efficiency losses, but improved gear life and improved uniformity of tooth contact over the full face. When the lubricant is thrown away from the mesh by the centrifugal action, the effectiveness of the cooling is diminished. Feeding in the oil as it enters the mesh results in most of it being ejected. How feeding the oil from the mesh affects both cooling and lubrication are still questionable. When cooling is the main criteria, it is essential to deliver the oil to the most appropriate position. This position is influenced by the pitch velocity, and it has been found that even at speeds below 50m/sec there are high pumping and suction actions. A database has been established of dynamic air action correlated with the delivery of the oil (ASME2000-14372 DETC/PTG).

An added problem for high-speed gears is that it is necessary at times to use a hydraulic lubricant whose air release problems are reduced with certain additives. At high speed aerodynamic effects are present due to the speed and are relatively independent of the load. These aerodynamic affects that we term windage and churning account for the major part of the losses, 80 percent or more. Major manufacturers in the high-speed field have conducted exhaustive tests to help determine the minimum quantity of lubricant for optimum cooling by location, volume, and pressure.

The first conclusion is to differentiate between churning and windage. Both consist of air with very fine oil droplets. In the churning action the mixture originates by the mesh and is compressed almost instantaneously. Every second thousands of teeth are engaging and repeating this action, generating losses and heat. The windage action, on the other hand, is created by the gear’s rotations distributing the mixture everywhere within the housing and producing undesirable losses. The solution appears obvious; reduce the air and minimize the oil. In 1922 a patent was issued in which the gear elements were enclosed in a vacuum that would allow evacuation of the whole casing. Not a practical solution. At least three manufacturers, to my knowledge, came up with the solution by enclosing the rotating elements in building a full or partial vacuum. Another viable solution is the introduction of baffle plates close to the tooth tip.

Different types of gear drives require different solutions. The movement of the air varies, and it is different with a spur and helical gear. In a spur gear the air enters the tooth space from both ends of the tooth. In a helical gear the air travels in one direction. From this data we know that if the oil is fed from the recess side, it is first pulled deep into the tooth space. For optimum results the oil should be fed with axial velocity from the leading edge toward the trailing edge. There is a wide variety in the methods used for oil jets. In many instances an analysis has not been made to find the optimum location, direction, and velocity. Akin and Townsend have published papers on the results of their research into analysis of mesh lubrication. They concluded that a radially directed jet near the out of mesh position delivered at the right pressure provided the best impingement depth. In gas turbine drives losses measured with a torque meter have been reduced by 20 percent, and by oil measurement 30 percent without the use of any internal or external devices and increased costs.