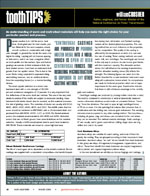 Popular practice is to mill the worm, heat treat, finish grind and, for best results, polish. Material for the worm requires a hard, smooth surface in combination with a high core strength. In general the harder the worm, the higher its rating. Lapping will not improve spacing or helix errors, and it can have a negative effect on tooth profile and the surface. Spur and helical gearing can operate at their endurance limit, but heat treated worms must have an endurance limit greater than the applied stress. This is due to the worm flanks being subjected to repeated rolling and rubbing stresses, and an additional stress from the separating forces (i.e. a reverse bending stress).

The most popular selection is a nickel case hardened steel with a core strength of 90,000 psi and a minimum elongation of 12 percent. It is very important that the deflections of the worm shaft are minimal. The use of the very best steels is useless if the shafts are subject to excessive bending. Case hardened mild steels should also be avoided, as this material increases the risk of grinding cracks. The materials of choice are usually AISI 9310, 8620, 4820, 4320, 4620, 4615, and 3310. The AGMA states that the worm should be hardened to HRC58-62, with a 16 micro-inch finish and produced from AISI 8620, 4320, 1117, or 1020. For flame-hardened worms the material recommended is AISI 8650 and 4150. Globoidal worms that are not finish ground have more limitations on the material selection. Usually a 4150 resulphurized steel is used, heat treated to HRC35-38. These materials are known to cause high tool wear.

Wheel Material: Non-Ferrous Castings
The life of a worm gear set is dependent on the wheelís material. Bronze castings are supplied with a consistent compositionóthe harmful impurities having been eliminated, and finished castings contain all the desired physical properties. The casting method has as much influence on the properties as the composition. The quality of the casting is affected by the temperature at which it is cast and the rate of cooling. Three casting methods are used: sand, chill, and centrifugal. The centrifugal cast bronze is the only way to produce circular bronze gear blanks with the maximum capacity. The allowable surface stress (Sc) will influence the wearing characteristics, and the allowable bending stress (Sb) affects the strength. The following figures are taken from the British Standard for a case hardened steel worm operating with a phosphor bronze wheel. No comparisons are made for frictional properties which are of major importance for the worm gear. Experiments indicate that there is still a frictional advantage in the centrifugally cast material.

Centrifugal castings are produced by pouring molten metal into a mold. The mold is contained in a horizontal or vertical dynamically balanced casteróotherwise vibrations would create an unwanted feature, ìbanding,î from the vibrations. The mold is spun at high centrifugal forces of 75 Gs or more. It is the spinning that induces fluid pressure that, in combination with the chilling rate, induces grain refinement. The resulting microstructure is superior to any other casting method. The impuritiesóincluding all gases, slag, and drossóare contained in the core where they can be removed. The method controls shrinkage. Static castings < 6î are usually cast in green sand without chilling; larger sizes are ring chilled and cast in dry sand.

Cast Aluminum Alloys
Aluminum alloys are suitable for sand casting, and most of them for gravity die casting. They are grouped according to their response to heat treatment. Aluminum alloys ìas castî do not benefit from heat treatment. In this group are alloys of magnesium/manganese, copper-silicon, and silicon. Those that benefit from heat treatment are copper/magnesium, silicon/nickel, and copper/magnesium/silicon alloys. In the next installment we will discuss bronze forgings and castings.

‘Sounds’ can be good, such as the hum of a well-designed gearbox. It’s ‘noise’ you don’t want.