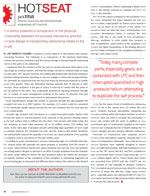 In last month’s column I touched on some aspects of atmosphere and vacuum carburizing furnaces. The following is a comparison of the physical relationship between the process mechanics and the furnace design in transporting the carburizing media to the parts to be carburized.

I mentioned that the evolution of the hot zone in vacuum furnaces likely dates to its beginnings as a bell jar system, and that the design concept is retained today so many decades later. LPC vacuum furnaces are traditionally heated with electrical resistance graphite heating elements operating on very low voltage to reduce the arcing potential. The elements are supported from the hot zone frame by electrical insulators to isolate power from ground. There are alternative heating systems that I’ll discuss in later columns. Since acetylene is the gas of choice it must be in contact with the parts to give up carbon to the steel. This is generally achieved by injecting acetylene through jets or nozzles of some arrangement pointing at the parts; I’ll describe how jets function in a semi-vacuum environment in subsequent discussions.

Most manufacturers design the nozzles to protrude through the rigid graphite felt insulated hot zone in a 360° pattern. For example, 12 nozzles could be connected to five manifolds equally spaced around the hot zone between the hot zone and the water cooled jacket.

Decades ago propane was introduced in a pulse/evacuation/pulse fashion that allowed the spent or reacted propane to be removed, in the process allowing carbon at the part surface time to diffuse into the steel. That process still exists today, but with acetylene at much lower pressure; 10 to 15 millibar versus 133 millibar and higher. In the early days of propane vacuum carburizing huge quantities of soot could accumulate between the insulated hot zone and the water-cooled jacket. Acetylene has substantially reduced the quantity of soot but can cause problems if the quantity of acetylene used is excessive for the part surface area.

According to some manufacture’s vacuum carburizing logic, at controlled intervals, the vacuum pump will evacuate the spent propane or acetylene from the vessel to the pump. Other furnace brands also pulse acetylene into the hot zone, but between carburizing pulses nitrogen is injected in an effort to purge acetylene from the chamber and allow carbon diffusion before the next acetylene pulse. No matter the acetylene introduction method, at the completion of the acetylene or carburizing segments all carbon bearing gas is evacuated and diffusion alone reduces the carbon to the desired surface concentration. Which carburizing method works best is like asking someone to evaluate art; it’s in the eyes of the beholder.

To be fair, the same is true of endothermic carburizing, since not all of the carbon from CO enters the steel parts. However, because atmosphere carburizing gas circulates entirely within the heated chamber at ambient pressure, fans are used to circulate the atmosphere to insure gas contact with the steel. In addition to fans, endothermic gas is continuously supplied to the heated chamber per a decade-old rule of thumb stating that five volume changes per hour assures effective carburizing.

Materials of construction also separate vacuum furnaces from atmosphere systems, primarily due to the maximum temperature obtainable. One of the processes vacuum furnaces were originally designed to replace were salt bath heat treating. Salt bath treating tool steels such as the “M” series like M-2 and M-4, molybdenum high speed steels were common many years ago, and to a very limited degree still is. These steels were heated and quenched from 2,200°F salt into 1,000°F salt and then allowed to cool naturally at ambient conditions. This interrupted quench process was ideal for controlling distortion in items like drill bits. Today many complex parts, especially gears, are carburized with LPC and then interrupted quenched in high pressure helium attempting to duplicate the salt process.