During heat treatment, the part experiences different temperature regimes (Figure 1). Atmospheres are used in heat treating to protect the part from scaling at the elevated temperatures used during austenitizing. The atmospheres range from simple wrapping the part in stainless steel or tantalum foil for small tool room parts, to protective atmospheres containing inert or protective gases.

On an industrial scale, these protective gases are usually mixtures of carbon monoxide (CO), hydrogen (H2), nitrogen (N2), carbon dioxide (CO2), and trace amounts of water vapor. These gases are produced using either endothermic generators with natural gas or propane as the carbon source, or injection directly in the furnace using nitrogen and methanol mixtures. In this article, we are going to discuss the formation of endothermic atmospheres for the protection of parts during austenitization.

Endothermic atmospheres are commonly used during the heat treatment of steel. It is used as a carrier gas for atmosphere additions for carburizing or carbonitriding. Using an endothermic generator, either natural gas or propane is used. If nitrogen-methanol is injected in the furnace, then methanol is the carbon source. The predominant reactions for producing endothermic gas are:

All of these methods produce an atmosphere containing CO and H2. Nitrogen appears because it is either from the atmosphere in the case of endothermic generators, or as a carrier gas in the case of nitrogen-methanol atmospheres. The nominal composition of the gas produced using these methods are shown in Table 1. The difference in the amount of CO produced using the different methods is very important, as this value is used to determine the carbon potential in the carbon controller.

For atmosphere generators, air and the hydrocarbon are mixed and introduced into a retort. For nitrogen-methanol, the nitrogen and methanol are injected directly into the furnace. For endothermic generators, the air:gas ratio for natural gas is typically 2.8 – 3.1 (theoretical 2.4:1), while for a generator using propane, the air:gas ratio is 7.5 – 8.1 (theoretical 7.2:1). The difference between the theoretical vales and those typically used in the shop are associated with reaction kinetics. For nitrogen-methanol, the mixture is a bit more difficult as methanol is a liquid. To obtain the proper atmosphere, the total volume will be 40% nitrogen. One gallon of methanol dissociates to form 240 standard cubic feet of CO and H2, so for 1,000 SCF of atmosphere needed for a furnace, then 400 standard cubic feet of nitrogen is required, and 600 standard cubic feet of CO and H2 are required. Therefore, 2.5 gallons per hour (600 SCF needed/240 SCF per gallon CH3OH = 2.5 gallons per hour) are needed.

An endothermic atmosphere generator (Figure 2) is operated at very high temperatures, typically 1,950°F (1,065°C) for natural gas, and 2,050°F (1,120°C) for propane generators. To handle these elevated temperatures, a high temperature, heat resisting alloy like HT is used. The retort is supported by a flange, and allowed to grow in the vertical direction. A schematic of a small generator is shown in Figure 3.

Inside the retort is the catalyst. This catalyst is often 1-inch cubes of alumina impregnated with nickel. Magnesia (MgO) cubes impregnated with nickel are often used with propane as the MgO resists heat better than alumina. Sometimes 1-inch spheres, impregnated with nickel are used, as the spheres offer a greater surface area. Nickel acts as the catalyst to improve the kinetics of the natural gas or propane reaction to form CO and H2. Plain refractory cubes are generally placed at the air/gas mixture entrance to delay the reaction and preheat the gas to the operating temperature. Once at the operating temperature, the gas reacts with air to form the desired atmosphere composition.

Once the gas has reached the operating temperature and has reacted, the gas exits the generator, where it is immediately passed through a heat exchanger to fix the composition of the gas, and to prevent the formation of soot in the temperature range of 1,300°F to 900°F (700°C – 500°C). Soot forms by the “carbon reversal” reaction CO ∀ C + CO2, in which soot is formed from the reaction of carbon monoxide to form carbon dioxide. These heat exchangers can either be water-cool, or air-cooled. Modern practice is to use air-cooled heat exchangers.

If the retort is heated by natural gas, additional control equipment consisting of fire safety equipment (manual shut-off valve or MSOV, fire-eyes and high- and low-pressure switches) are generally required for safe gas operation. The gas supply is shut off (tripping the MSOV) in the event of any malfunction such as:

Similar gas safety equipment is used on the gas train supplying the retort with gas, separate from the temperature control gas supply.

The equilibrium composition of the gas depends on the water gas reaction:

This means that there are four gas species that can be used for proper control of the atmosphere. Practically, there are really only two reactions available for control:

Dew point is often used to control the carbon content of atmosphere generators or furnaces. However, the use of dew point instruments has waned with the implantation of more modern control methods such as carbon probes and infrared analyzers. The relationship of dew point to the percentage of carbon is shown in Figure 4. One thing to remember, is that these charts are only valid with a 20 percent CO. Other charts need to be calculated or developed for CO concentrations at values other than 20 percent CO. The classical dew point instrument is the ALNOR Dewpointer (Figure 5) — these instruments are commonly found in the heat treat shop. They are still in use today.

The amount of carbon dioxide present in the atmosphere is also used. This is often done using infrared analyzers. These often are called three gas analyzers. The advantage of three gas analyzers, is that the three gases measured are CO, CO2, and CH4. This enables the user to optimize the generator (or nitrogen-methanol system) setting to first achieve a 20 percent CO. Once that is accomplished, the charts and graphs indicating various carbon potential relationships will accurately indicate carbon potential as a function of either dew point or carbon dioxide.

The infrared gas analyzer operates by measuring the absorption of infrared light through the gas sample. The gases CO, CO2, and CH4 absorb light at specific wavelengths. A detector measures the energy present at the wavelength of interest and compares it to the reference condition of no absorption. A typical modern infrared analyzer is shown in Figure 6.

The relationship between the carbon potential and carbon dioxide is shown in Figure 7. Again, it is important to reiterate, that these graphs are only valid with 20 percent CO in the atmosphere. Use of other values of CO in the furnace or generator atmosphere will produce erroneous results.  One of the most recently developed methods for controlling furnace atmospheres is the oxygen or carbon probe. In this method, the carbon potential is related to the oxygen partial pressure associated with the reversible reaction: 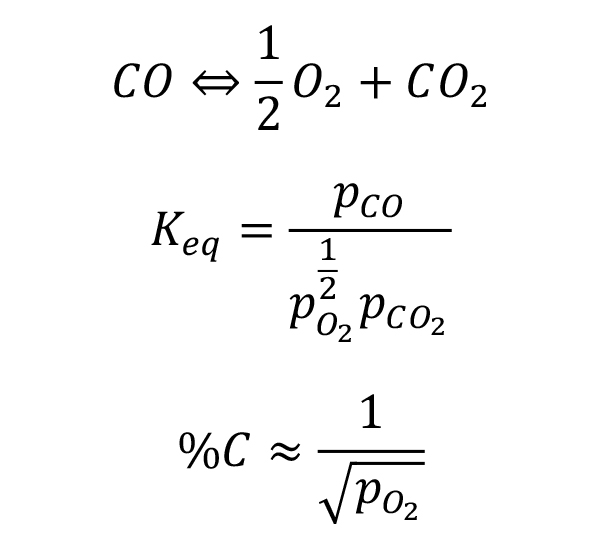 An oxygen probe or carbon probe consists of platinum electrodes separated by an yttrium-doped zirconia tube. The probe is inserted into the furnace or generator. An air supply of approximately 0.5 CFH of air is supplied to the probe as a reference. The differential oxygen partial pressure between the furnace atmosphere and the reference atmosphere sets up a voltage across the probe. By measuring this small voltage (measured in millivolts), the carbon potential can be determined. Thus, the furnace atmosphere carbon potential can be controlled by air and natural gas additions by monitoring the voltage potential across the probe. In modern instruments, this is done internally using microprocessors. In many ways, it operates in a similar fashion to the O2 sensor in a car for proper combustion.

The advantage of an oxygen probe, is that it is accurate and fast. A direct read-out of the carbon potential of the atmosphere is common. The probe has a high temperature range suitable for high temperature carburizing. Little maintenance is required.

The primary disadvantage of the oxygen probe is that it assumes a fixed CO content (typically either 20 percent for natural gas or 23 percent for propane). If the CO content is not at this fixed value, then the readings obtained by the probe are erroneous. The oxygen probe is also a ceramic tube and prone to thermal or mechanical shock. It must be routinely replaced at roughly yearly intervals, depending on the application. Heavy carburizing can shorten the life of the probe. However, the accuracy, ease of use and lack of maintenance, generally outweigh the disadvantages.

In this article, we have discussed the production of endothermic atmospheres used in the hardening of steel. We also discussed the control of the carbon potential of the associated furnace or generated atmosphere. Probably the most important takeaway from this discussion, is that the CO content of the furnace must be stable at a value of 20 percent (or 23 percent for propane generators) for accurate carbon control of the endothermic atmosphere. The use of a portable infrared gas analyzer can make troubleshooting of atmosphere problems much simpler and more accurate. Should you have any questions regarding this article, please contact the writer.