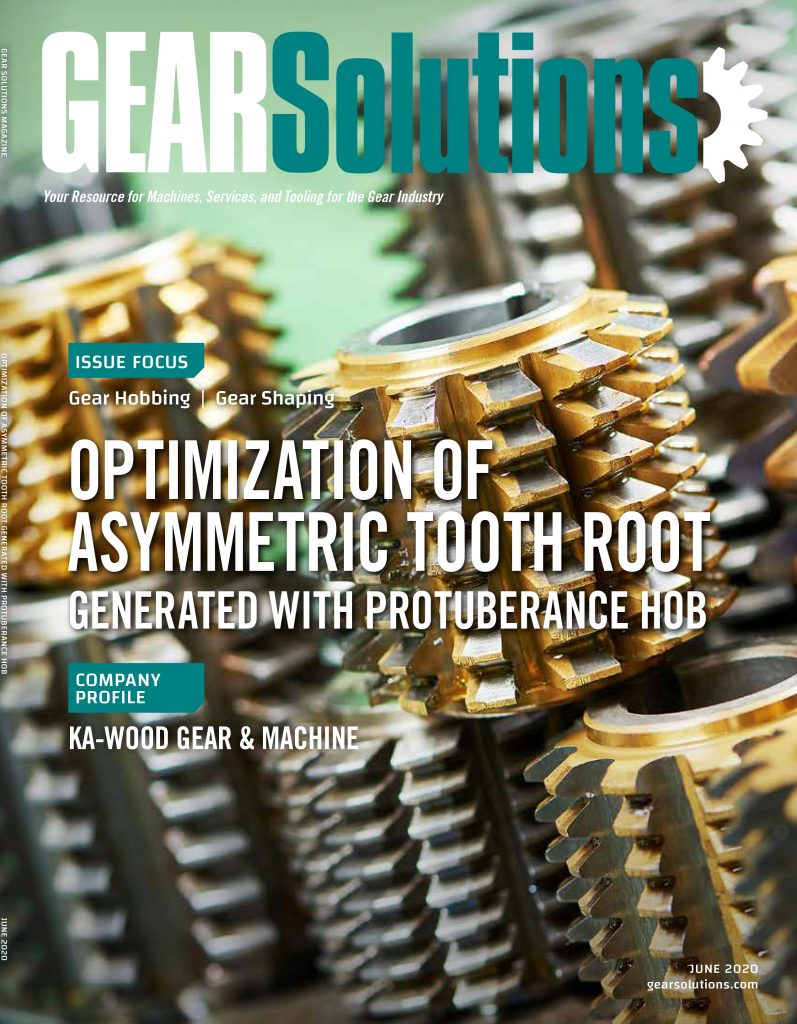 For the last century, Ka-Wood Gear & Machine has been manufacturing precision gear products that include spur, helical, and worm gears, as well as producing spline shafts, racks, timing belt pulleys, and sprockets for a vast array of  industries.

It’s not every company that can boast it’s been in business for a century, and that milestone is not something the owners of Ka-Wood Gear & Machine take for granted. Those 10 decades were filled with a lot of ups and downs for the gear industry, but being able to change with the times while […]
Kenneth Carter

Demonstrating the construction and optimization of the tooth root fillet while leaving required grinding stock on the involute tooth flanks.

Comparing the influence of geometric variations in physical hob size on tool life; specifically, the overall length of the hob.

Manufacturers consider many factors when shopping for a gear hob solution: What material is being cut? What is the pitch of the part? Will the hob be delivered on time, and what will it cost? Unless the job is hot and lead time is critical, the cost of the tool tends to be the deciding […]
Michael Weas 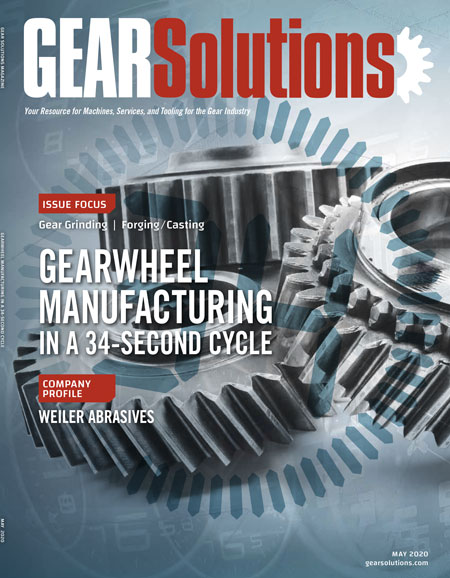 Minimizing production times to ensure competitiveness is one of the most important challenges in the automotive industry — Henry Ford already recognized this over a century ago. After decades of optimization, it is difficult to reduce machining times even further while maintaining the same level of quality. Nevertheless, the company Volkswagen (VW), near the German […]
Martin Witzsch

Hybrid steels show many interesting properties relevant to gear applications, somewhat depending on the area of application and the working conditions.

In the ongoing strive for light weighting or power densification, high-performance clean steels are showing a significant improvement. As a next step, gear steels that combine several properties, are now proving an interesting alternative. Traditional gear steels achieve their maximum hardness after carburizing and a fast quench. A fast quench usually results in distortion as […]
Lily Kamjou, Joakim Fagerlund, MSc 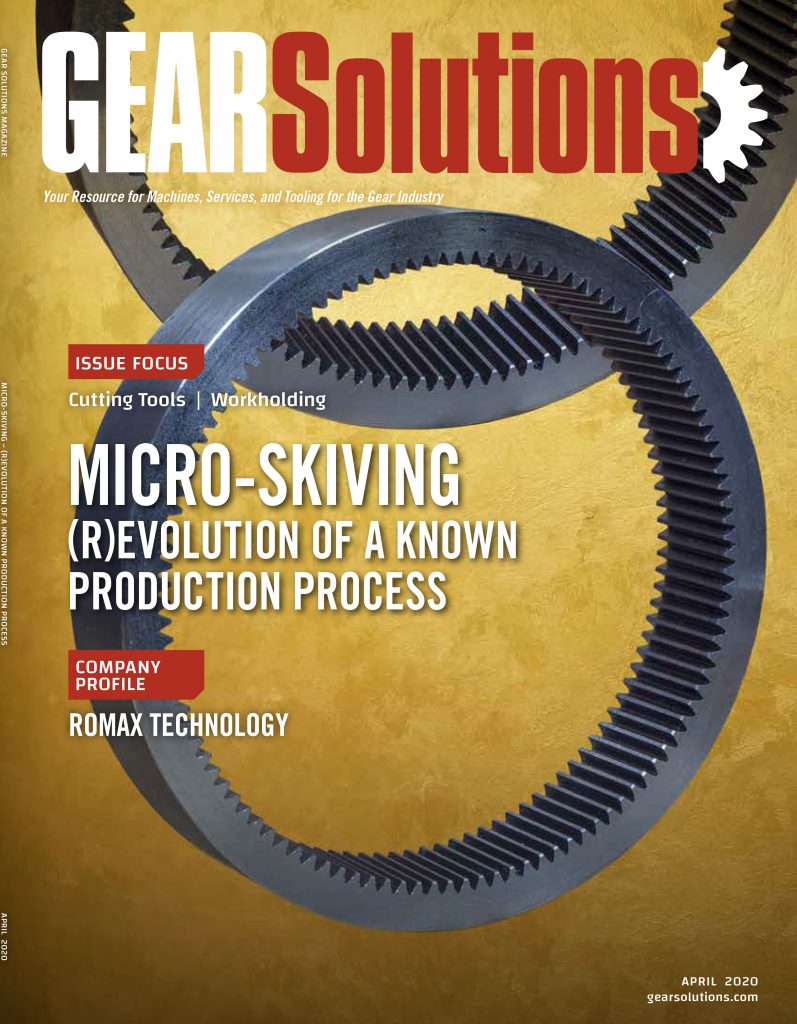 Designing, creating, and manufacturing gears and drive systems can make up a sizeable piece of a manufacturer’s budget. By employing innovative technology as an integral part of the development process, much of that cost can be minimized — this is accomplished through simulation-led design and virtual prototyping. Romax Technology does just that with its leading […]
Kenneth Carter

Micro-skiving has been developed that allows users access to the skiving technique for machining inner micro-teeth.

Production of internally toothed gear wheels is possible in many different ways. Different techniques such as gashing, broaching, wire EDM, or shaving make it possible to achieve these profiles. However, skiving seems to be the optimal solution for reducing production time of this type of gears when large production batches are required. This internal gear […]
Pierre Falbriard, Hervé Baour

With the development of new cutting tool technology, chamfering with hobs has found new life; chamfer hobbing is now the process of choice for chamfering and deburring automotive-size gears in medium and high volumes.

In the last few years, chamfering and deburring have gained new respect and risen to a level of importance equal to that of other processes. Manufacturers of Electrical Vehicle (EV) drive systems, where noise behavior is of paramount importance and hard finishing a must, are keenly aware of how an improperly chamfered and deburred gear […]
Gottfried Klein

Starting out almost a century ago by making clock parts, Neugart now develops, produces, and sells planetary gearboxes and custom gearboxes all around the world to a variety of industries.

Gearboxes are, quite literally, the driving force for dozens of industries, and Neugart makes reliable, quality gearboxes that have helped push the family-owned company into the global arena. A large part of that success is due to Neugart’s ability to create gearboxes using a modular design. “It’s that modular design that allows us to pretty […]
Kenneth Carter

While searching for a material that meets all of the general and branch-specific lubrication requirements, water is a visionary, yet obvious, raw material available worldwide that’s non-toxic and non-combustible.

1 Introduction Although different base oil types exist in the market and are widely in use, the majority of industrial lubricants are still based on mineral oils due primarily to low cost and easy miscibility with other oils. However, despite their widespread use, conventional lubricants reach functional limits in various scenarios. In addition to the […]
Matthias Pfadt, Elena von Horsten, Balasubramaniam Vengudusamy

Flat broach manufacturing is a tooling option that offers some advantages to circular broaching, but the tools need to maintain optimum sharpness in order to be effective. 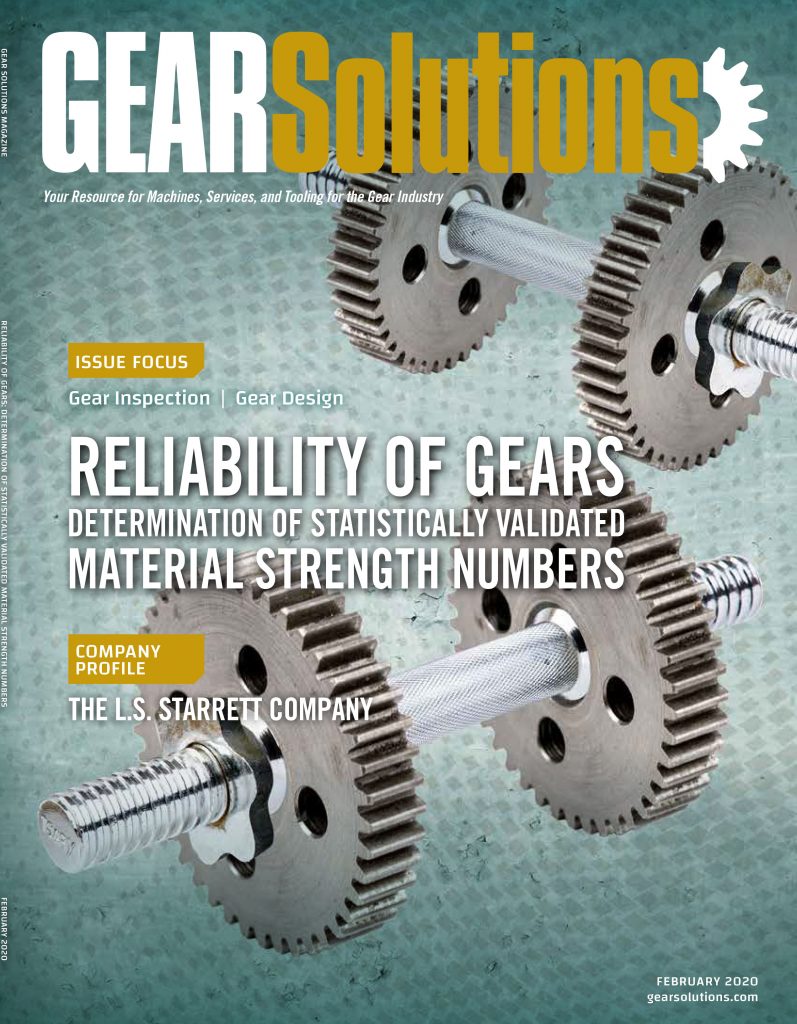 The L.S. Starrett Co. has been designing, manufacturing, and supplying high-quality, precision measuring tools, metrology systems, and more for 140 years.

When companies need to ensure the highest and most accurate quality control process, they turn to the experts at Starrett. Founded in 1880 and headquartered in Athol, Massachusetts, The L.S. Starrett Company is a leading global manufacturer of precision measuring tools and gages, optical comparators, vision systems, force measurement, and hardness testing solutions. Starrett also […]
Kenneth Carter

This paper is intended to give a review on the statistical reliability behavior of cylindrical gears with regard to pitting and tooth root breakage failures.

One of the most important goals when designing a gearbox is to ensure a sufficient reliability in operation. Depending on the field of application, the acceptable probability of failure may be different, typical values commonly are in the range of 0.01 percent to 10 percent. Material strength values regarding main failure modes such as pitting […]
Michael Hein, Thomas Tobie, Karsten Stahl, Dr.-Ing. Burkhard Pinnekamp 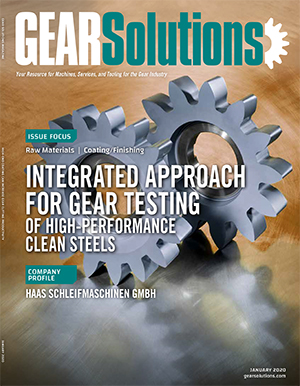 When a gear or a geared shaft is being produced, it’s often moved through several machines before the finished product is ready. But Haas Schleifmaschinen GmbH has the capability of offering gear manufacturing that takes the multiple machines out of the process. “We’re about combining operations,” said David Drechsler, business development manager for Haas Multigrind® […]
Kenneth Carter

The power density of gearboxes is continuously increased by different research activities. Besides new material developments, the cleanliness of steels comes to the forefront in order to meet future requirements regarding load carrying capacity of gears. The experimental quantification of the load carrying potentials for high performance steels is the basis for introducing cleanliness as […]
Christoph Lopenhaus, Dieter Mevissen, Lily Kamjou, Elias Lothman