In 1920, George Nixon founded Nixon Broach and Tool Company with the intention of selling general machining and special tooling. The company drifted into gear manufacturing and by 1924 it had changed its name to Nixon Gear and Machine Company. Beginning in a small

building on Oxford Street, (Oxford St. Inn), the company prospered and eventually built a building on Ainsley Drive. This building was expanded a number of times until a new facility was built on Onondaga Hill in 1968.

The late sixties saw a major shift in the business machine segment of the gear manufacturing market, from steel spur and helical gears to powdered metal gears and plastic gears. Nixon Gear bought its first gear grinding machine in 1969. In the early 1970`s plastics and electronics were quickly replacing metal gears and forced the company to change focus and develop new markets.

In 1977, Gear Motions purchased Nixon Gear from bankruptcy and began its evolution into a precision gear grinding operation. This acquisition added precision ground gearing to the Gear 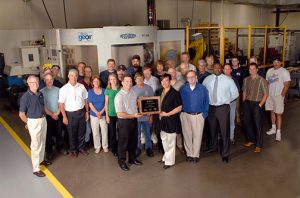 Motions network. The acquisition allowed Gear Motions to service customers who had high OEM volumes. The acquisition of Nixon Gear substantially enlarged the sales territory into the Midwest and Mid-Atlantic States.

In 1992, Nixon Gear moved from its facility located on Nixon Park Drive to a state-of-the-art, climate controlled building located on Milton Avenue in Syracuse. The 45,000 square foot facility allowed Nixon Gear to improve its operations and efficiency while allowing for additional investment in precision gear grinding. It became one of the first ISO 9002 Registered gear manufacturers in 1996 and is presently ISO 9001:2008 certified.

Starting as a small job shop, it has grown into one of the premier precision gear manufacturing companies in the United States. Servicing diverse markets domestically and internationally, it has built its success on four key principles: Quality, Precision, Service, and Value. These principles are the basis for its success today and are the foundation for the future of Gear Motions.