Sir David McMurtry, chairman and chief executive of global engineering company Renishaw plc, has been elected a Fellow of the Royal Society, the UK’s national academy of science. The formal admission ceremony will take place in London on July 15. Sir David will join a Fellowship that is made up of the most eminent scientists, engineers, and technologists from the UK and the Commonwealth, all of whom are elected for life after a rigorous peer review on the basis of excellence in science. He is one of 44 new Fellows and eight new Foreign Members elected this year, including scientific experts working on drug-resistant malaria, non-invasive prenatal diagnosis of genetic disorders, and human understanding of the solar system. 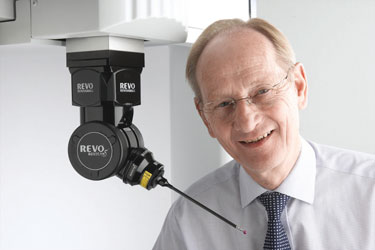 Sir Paul Nurse, president of the Royal Society says “It is a true pleasure to welcome this year’s new Fellows to the Royal Society. They join the ranks of the UK and Commonwealth’s leading scientists, counting themselves among early Fellows such as Isaac Newton, Robert Boyle, and Charles Darwin. The Society aims to expand the frontiers of knowledge by championing the development and use of science, mathematics, engineering, and medicine for the benefit of humanity and the good of the planet. It is the contribution of excellent individuals such as these which makes this possible.”

The Fellowship citation for Sir David recognizes that he “is distinguished for his ability to think laterally and come up with innovative solutions to measurement problems, combined with business leadership.” The citation also notes that from the time of his invention of the touch trigger probe in the early 1970s, Sir David has remained at the forefront of measurement technology, with his name on over 150 Renishaw patents.

Sir David has received significant global recognition for his career achievements including honorary doctorates from leading UK universities, Fellowships from the Royal Academy of Engineering, the Institute of Mechanical Engineers, and the U.S. Society of Manufacturing Engineers (SME). Last year he was awarded the prestigious General Pierre Nicolau Award by the International Academy for Production Engineering (CIRP). In 1989 he became a Royal Designer for Industry; in 1994 was made a CBE “for services to Science and Technology,” and in 2001 was appointed a Knight Bachelor “for services to Design and Innovation.”

The Royal Society is the UK’s national academy of science. Founded in 1660, it has three roles: as a provider of independent scientific advice, as a learned Society, and as a funding agency. Its expertise is embodied in the Fellowship, which is made up of the finest scientists from the UK and beyond. Its goals are to: invest in future scientific leaders and in innovation; influence policymaking with the best scientific advice; invigorate science and mathematics education; increase access to the best science internationally; and inspire an interest in the joy, wonder and excitement of scientific discovery. For more information visit [royalsociety.org] and [www.renishaw.com].

Metallurgy of Steel for the Non-Metallurgist