Engineers have been using thermoplastic resins to produce gears used in assemblies for the automotive, appliance, business equipment, and other market segments for many years. Thermoplastics offer several improvements over metals, including lower cost, less noise, and lighter weight, along with less energy loss due to frictional heat generation in non-lubricated gear sets. Historically, the most commonly specified resins for these applications have been acetal (POM), nylon (PA 66 typically), and PBT polyester with or without the addition of modifiers such as PTFE, carbon fiber, glass fiber, silicone, or combinations thereof to reduce friction and wear. However, as designers have become more experienced with and comfortable specifying thermoplastics in their gear designs, performance requirements for these components have increased as well. Aliphatic polyketone offers engineers four distinct advantages relative to other materials in meeting these design challenges: 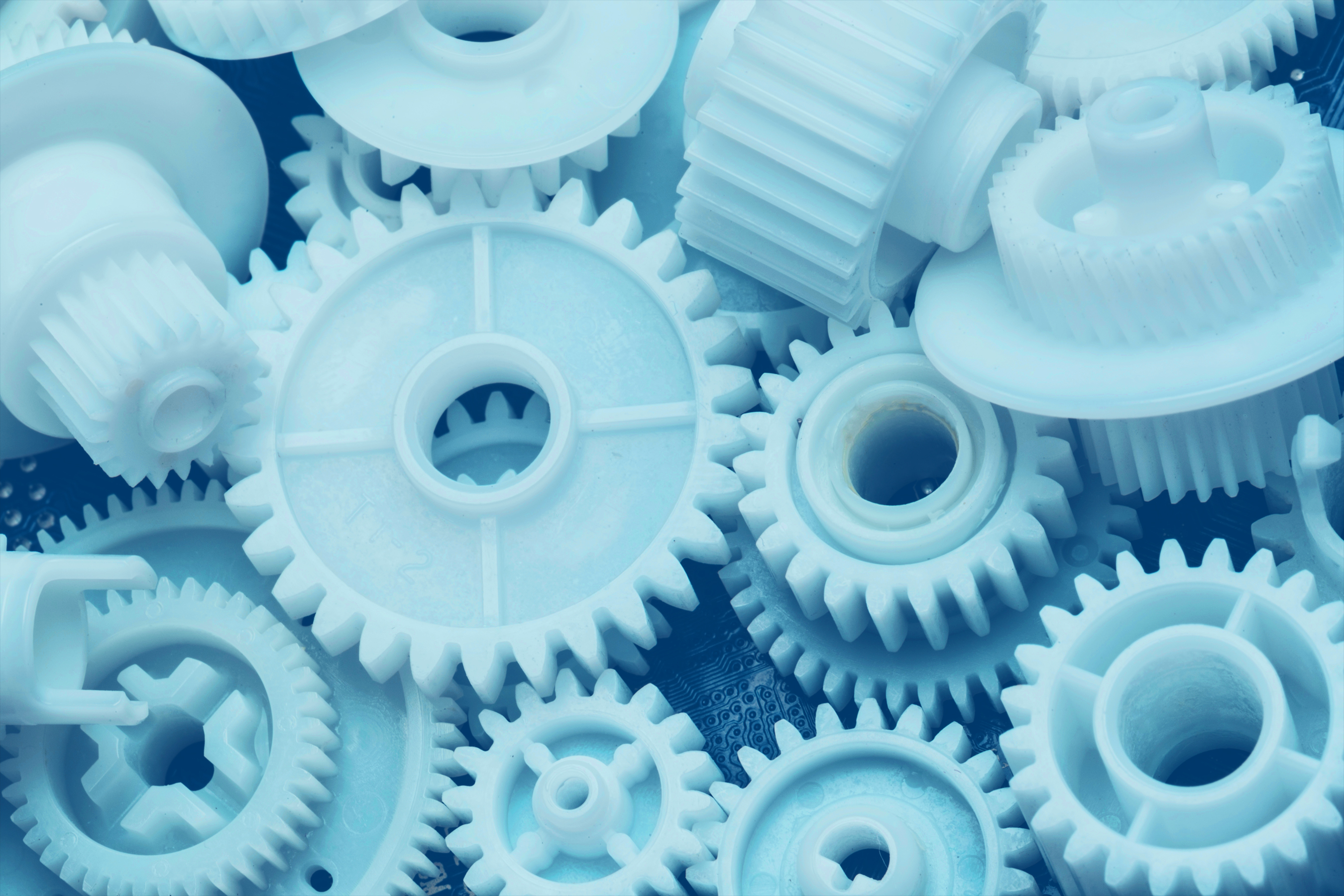 Gears require precise geometry in order to transmit power/motion efficiently. As gears move against one another, wear naturally occurs on the gear teeth. This wear changes the shape of the teeth, resulting in less efficient transfer of force between the gear teeth, an increase in noise, and less efficient functioning of whatever device is dependent upon operation of the gears. Given these facts, then it becomes obvious why wear resistance is a critical consideration when selecting a material for use in any gear design.

Wear is a complex phenomenon dependent upon many variables, regardless of the materials involved. For example, the coefficient of friction, surface hardness, heat transfer coefficient of the materials involved, the load applied, applied load, velocity of the moving pieces, and finish of the wear surfaces all affect wear in any gear set. The viscoelastic nature of thermoplastics makes this an even more difficult performance characteristic to model accurately using standardized laboratory tests. Nonetheless, industry has developed several testing protocols that can be used to force rank various materials in terms of likely wear performance. The more common of these include the Block on Ring (ASTM G77), Pin on Disk (ASTM G99) and Thrust Washer testing (ASTM D3702). While each protocol has advantages and disadvantages [1], [2], determination of a materials wear factor and limiting PV value per the ASTM D- 3702 protocol is the method for which data are most commonly reported with thermoplastic resins. This testing involves rotating a machined or molded disk of standardized diameter and thickness at a specified speed and contact pressure against itself or some other material, such as steel, while the counter face material is stationary. One of the results from this test is a derived value known as the Wear Factor, K, which is a measure of the volume of material abraded away from the test specimen during the test. This value is derived by dividing the Wear Volume (W) by the product of the Applied Force, Velocity, and Elapsed Time, as shown the following equation.

As shown in Table 1, the results from this test method demonstrate that aliphatic polyketone resins (PK) exhibits much better sliding wear resistance against steel than does either nylon (PA) or acetal (POM) when tested using the stated conditions.

Typically, thermoplastic resins exhibit much higher wear rates when the two contact surfaces are the same material. However, this is another way in which aliphatic polyketone resins offer a performance advantage relative to nylon and acetal, as polyketone exhibits much better wear against itself than do these other resins.

Although polyketone resins do exhibit lower wear than other resins when both components are produced from polyketone, if other application requirements permit the use of a different material in combination with polyketone, this will result in superior wear resistance. This is reflected in the data provided in Table 2.

As shown by this data, the lowest wear rate among these material combinations would be achieved by using a gear set which pairs polyketone and POM components. It is also worth noting here that the wear rate for any given material pairing is dependent upon which component of the test specimens (pin or disk) is produced from which material. For example, with a POM pin and PK disk, the reported wear rate is 2.9 mm3/Nm while testing at the same speed and velocity, but a PK pin and POM disk results in a measured wear rate of 0.2 mm3/Nm.

This clearly demonstrates the dependency of wear on specimen geometry and the importance of matching test conditions as closely as possible to those which will be encountered in actual field service for the best results.

Another commonly referenced tribological material property that is used to force rank materials is the “Limiting PV” value. As with wear rate testing, much has been written [1 – 5] regarding the validity of using this data to predict wear rates in sliding contact applications, with one point in common among these various positions – namely that the validity of PV data measured in this way is highly dependent upon specimen geometry and test conditions. Different test methods and conditions will produce different results, as was pointed out in the Pin on Disk data referenced in Table 3. No one would argue that the best method to determine suitability of any particular material for a given application is application-specific end use testing. However, for a variety of reasons, this is not always a practical option, thus leaving the engineer in need of an alternate method to screen materials for suitability in any particular component. In this context, the concept of a PV limit remains a useful tool for preliminary material selection, so long as the test conditions and specimen geometry are taken into account by the designer and are relevant to the end use conditions of the application of interest.

There are multiple methods in use for determining a material’s PV limit using a thrust washer device. In one method, the test velocity is held constant, and the load is increased while constantly monitoring temperature, wear rate, and/or coefficient of friction. The material is tested at a minimum of three velocities, selected to cover a practical range, and at each velocity tested, a load-stepping test is conducted. Each load is maintained for approximately 30 minutes after frictional torque and bearing temperature reach equilibrium. At some load and velocity combination, the frictional torque and/or bearing temperature will increase sharply, leading to bearing failure. This value is the Limiting PV value for the particular pressure applied and test velocity in use.

To transfer force/motion efficiently, gear teeth must mesh accurately. Tooth-to-tooth error (TTE) commonly arises in thermoplastic gears, either due to anisotropic mold shrinkage or environmental effects. When misalignment occurs as a result of these dimension issues, it can result in excessive wear, increased noise, and premature failure.

Crystalline resins, such as nylon and acetal, typically exhibit anisotropic shrinkage, meaning that the amount of shrinkage that the material exhibits is different in the direction parallel to flow during the molding process than it is perpendicular to flow direction. This makes generating an accurate net as molded shape more difficult and very dependent upon gating design. However, although it is a crystalline resin, owing to its unique structure, aliphatic polyketone exhibits nearly isotropic mold shrinkage, thereby eliminating this design challenge and making it much easier to achieve the precise tolerances required for successful gear set operation.

When a part produced from a thermoplastic resin absorbs a fluid, its shape changes. Whether that fluid is a reagent the gear comes into contact with during operation or atmospheric moisture, the result is the same – increased TTE, which increases wear and noise and may even cause the gear set to stall. Unlike polyamide (nylon) resins, aliphatic polyketone resins absorb little moisture from the atmosphere and thus do not change shape as much as nylon resins do, as is shown in Table 5.

Creep is a phenomenon wherein deformation (strain) increases over time while subjected to a static load. Because of their inherently viscoelastic nature, all thermoplastic resins exhibit this behavior to some degree. Mating gear teeth can experience creep deformation when a stall condition occurs. Therefore, creep rupture performance is an important consideration when selecting a resin for use in a gear design.

One of the benefits offered by injection-molded thermoplastic gears is quieter operation than metal gears. It has been speculated that this is due to a damping effect related to deformation as the gear teeth strike each other during operation. Whether the reduction in noise is due to a damping effect or something else, not all thermoplastics offer the same degree of noise reduction. As is shown in Figure 2 testing over a range of speeds from a few hundred to approximately 1,800 rpm has shown that polyketone gear sets (PK to PK) are up to 16 percent quieter in operation than are acetal (POM to POM) gear sets, while they are quieter than nylon (PA to PA) gear sets at low speeds and slightly louder at the high end of this range of speeds.

Considering that misalignment and higher TTE can increase noise during operation, it may be that quieter operation with gears molded from aliphatic polyketone is, at least to some degree, related to the superior dimensional control possible with these resins.

In addition to the advantages previously discussed, aliphatic polyketone offers significant processing advantages as compared to acetal (POM), nylon (PA), and polyester (PBT/PET) resins commonly used in gear and bearing applications. These advantages arise from the fact that the material is not subject to hydrolytic degradation during melt processing and that it exhibits low melt viscosity with rapid crystallization rates and nearly isotropic mold shrinkage.

It is well known that many resins commonly used to produce gears and bearings have significant pre-processing handling requirements. More specifically, acetal, nylons, and polyester resins all require pre-drying to various maximum moisture contents, ranging from 0.20 to 0.02 percent moisture content, in order to prevent hydrolytic degradation during the molding process. This pre-drying typically requires several hours (commonly 3-6) at temperatures ranging from 180° F to 240° F. If regrind is used in the production process, pre-drying the material becomes more demanding, due to the presence of dust or “fines” in the material, varying particle size, and often much higher moisture content in the regrind itself, which then necessitates additional drying time. However, since aliphatic polyketone is not subject to hydrolytic degradation during the injection molding process, pre-drying is not typically required with this material, thereby increasing productivity and reducing processing costs. 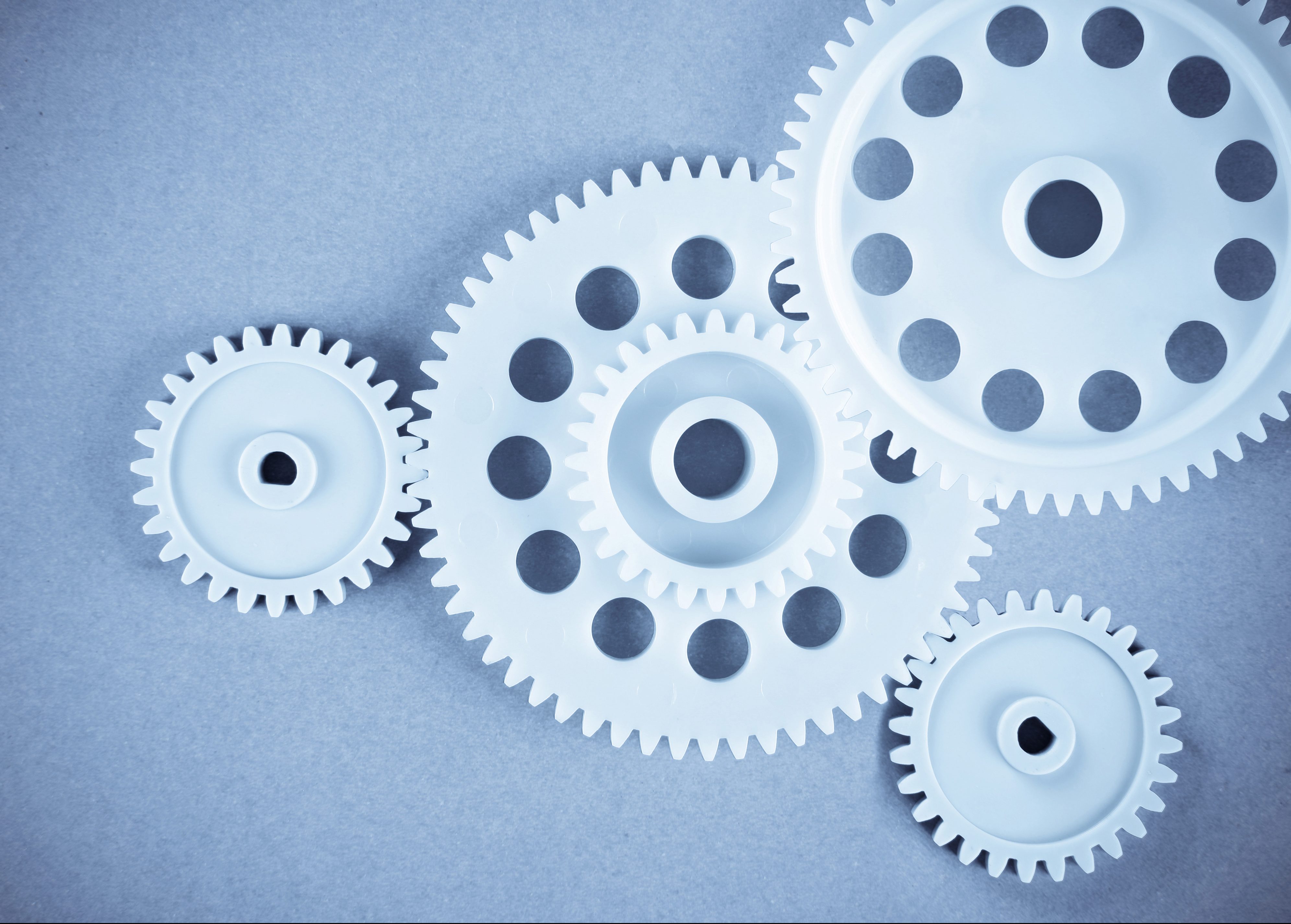 Aliphatic polyketone resins exhibit very rapid crystallization rates, which lead to reduced cooling time requirements in the injection molding process. In the injection molding process, the cooling phase is typically the primary driver of total cycle time, which is, in turn, proportional to actual processing cost per part. Therefore, reductions in cycle time translate directly into reduced processing cost per part. Injection molding cycle times for aliphatic polyketone are typically 15-30 percent shorter than those required for the same part when molded from acetal (POM) or nylon (PA). This not only results in reduced processing cost but also increases productivity.

Lastly, unlike acetal and nylon, aliphatic polyketone resins exhibit nearly isotropic mold shrinkage, which increases the accuracy with which gears and bearings can be produced. This translates to reduced tooth- to-tooth error (TTE), which improves gear efficiency with reduced wear and noise during operation.

Printed with permission of the copyright holder, the American Gear Manufacturers Association, 1001 N. Fairfax Street, Suite 500, Alexandria, Virginia 22314. Statements presented in this paper are those of the authors and may not represent the position or opinion of the American Gear Manufacturers Association. (AGMA) This paper was presented October 2017 at the AGMA Fall Technical Meeting in Columbus, Ohio. 17FTM17 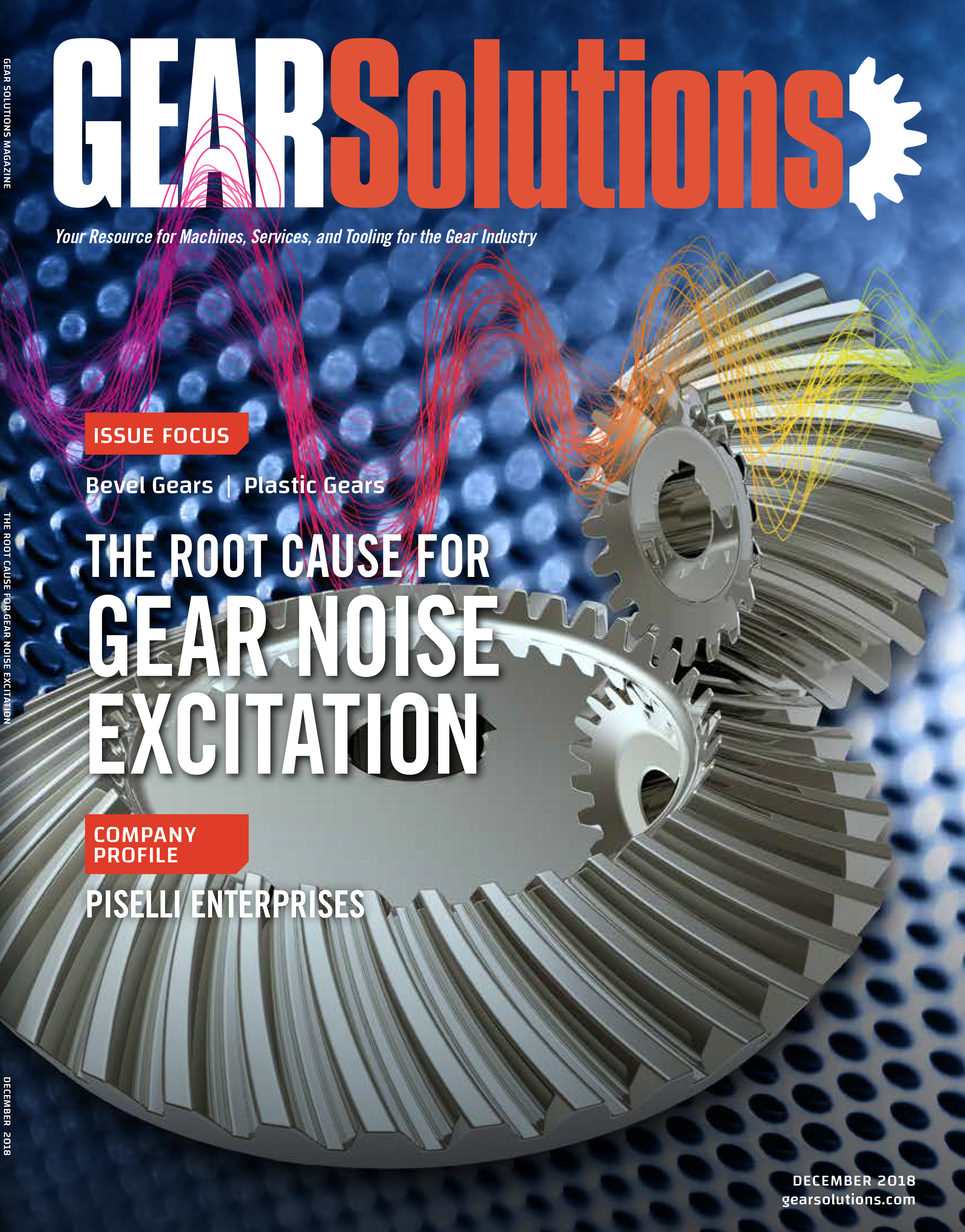