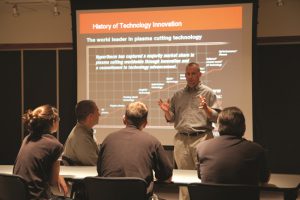 Hypertherm, a U.S.-based manufacturer of plasma, laser, and waterjet cutting systems, is adding three new cities — Tulsa, Atlanta, and Houston — to its 2014 live training tour on advanced cutting topics. The workshops, valued at $250, are offered at no charge to people who cut metal and other industrial materials. On September 16, Tulsa will see Hypertherm’s ProNest Power User, an eight-hour training session designed for programmers currently using ProNest, or anyone wanting a thorough look at the software’s capabilities. Hypertherm CAM software experts share advanced, process-specific programming techniques for plasma, laser, oxyfuel, and waterjet cutting. In addition, they provide tutorials on powerful production tools such as the integration of ProNest to an ERP/MRP system, the synchronization of work order flow and plate inventory, and efficient material utilization.

Hypertherm will offer two separate days of training in both Atlanta and Houston — Hypertherm’s Advanced Productivity Training on Day 1 and ProNest Power User on Day 2. The Advanced Productivity Training is presented by Jim Colt, an avid fabricator and 35-year Hypertherm veteran widely known for his expertise on all metal cutting topics. Colt will cover plasma, laser, waterjet, and oxyfuel cutting. In addition, he will show attendees how to properly inspect their plasma consumables, and offer tips aimed at helping companies increase consumable life. Colt estimates operators regularly replace half used consumables, needlessly costing their company money.  Dan McLenithan, a product and application engineer specializing in both CNC and torch height controls, joins  Colt for this training, which is also eight hours in length. He covers a number of performance strategies employed by some of the best fabricators and steel service centers in North America. Dates for this set of training workshops are September 17 and 18 (Atlanta) and September 18 and 19 (Houston.) Interested individuals can register for one day of training or both at www.hypertherm.com/LiveTraining. Though there is no cost to attend any of these workshops. Space is limited to ensure a good presenter to participant ratio