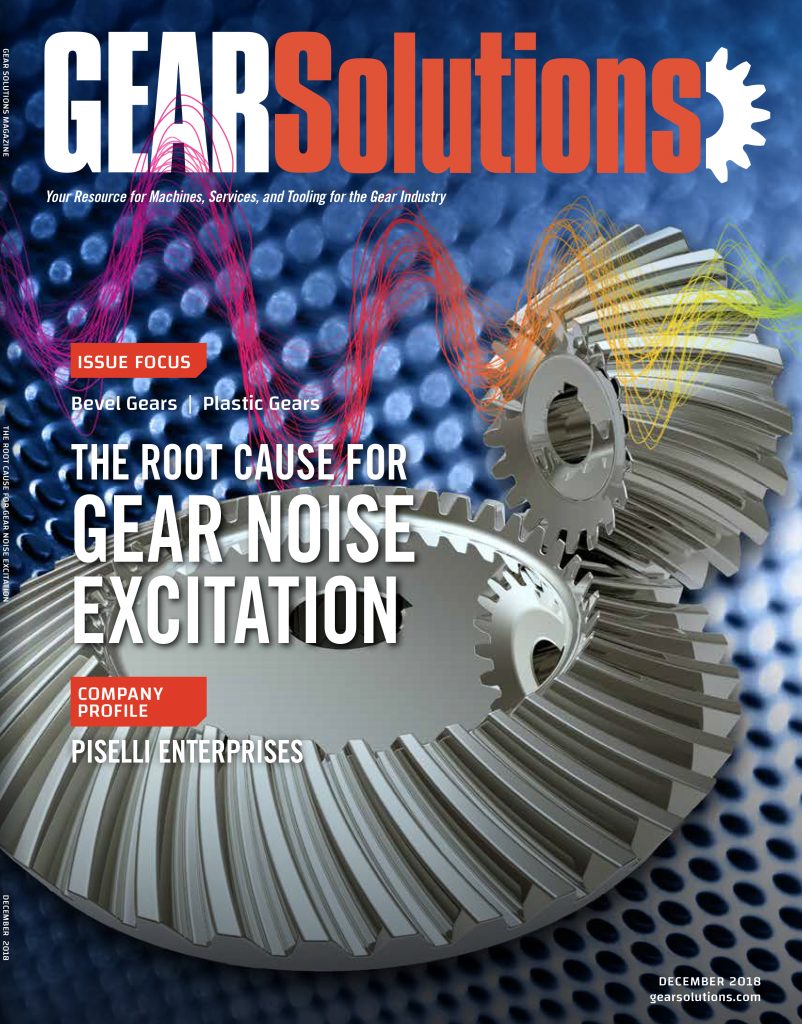 Piselli Enterprises provides its customers with the best solutions to fit their manufacturing needs, whether it’s parts, machines, or consultation services that can help take a customer to the next successful level.

When it comes to the gear industry, Rich Piselli just couldn’t stay away. Piselli is president and founder of Piselli Enterprises, a venture he started in 2016. But Piselli’s expertise with the gear market reaches back decades, and it is that extensive knowledge that is a major crux of his most recent foray into the […]
Kenneth Carter

The Root Cause for Gear Noise Excitation

Though focused primarily on parallel-axes gearings, the following methods are also valid for gear pairs with intersected axes of rotation, as well as crossed-axes
of rotation of the gears.

This article is about noise excitation and vibration generation in gear drives when the gear drives operate. It is shown that transmission error is not the root cause for the noise excitation as it is commonly meant. Instead, transmission error is a consequence of deviation of base pitches of a gear and a mating pinion […]
Dr. Stephen P. Radzevich Ph.D., Dr. (Eng) Sci.

Engineers have been using thermoplastic resins to produce gears used in assemblies for the automotive, appliance, business equipment, and other market segments for many years. Thermoplastics offer several improvements over metals, including lower cost, less noise, and lighter weight, along with less energy loss due to frictional heat generation in non-lubricated gear sets. Historically, the […]
Tim Morefield

How Fast Fourier Transformations of single flank errors can be used during the development of a gearset to establish harmonic levels and side bands of quiet rolling gearsets.

The relationship between FFTs and gear quality as well as gear noise is investigated with some surprising conclusions, which leads to the discovery of a new interpretation of higher harmonics and the unknown influence of the residual error. An excursion into the psychoacoustic science in this phase of the research delivered many useful answers. Finally, […]
Dr. Hermann J. Stadtfeld

CCT diagrams allow predictions of hardness and microstructure in simple shapes quenched in oil, water, or other quenchants.

In the last column, we discussed the construction and application of Time Temperature Transformation or Isothermal Transformation diagrams. It was shown how these diagrams could be used to start planning a heat-treatment schedule, and start picking times and temperatures necessary to achieve the desired properties. However, one of the limitations of the diagrams is that […]
D. Scott MacKenzie, Ph.D., FASM

What does New England Gear bring to the table that makes it unique among other gear industry companies? New England Gear is approaching its 25th anniversary. Since the beginning, we have focused solely on Fellows gear shapers so we have a tremendous amount of knowledge and inventory to draw from. We believe that we have […]
Gear Solutions staff

Selecting the proper size keyway is determined by the shaft size. Sometimes you can put a square peg in a round hole.

Did you ever have someone tell you that you cannot fit a square peg into a round hole? This common phrase is misleading because it details the dimensions of neither the peg nor the hole. Clearly if the peg is 1-inch square and the hole is 4 inches in diameter, then the peg will easily […]
Brian Dengel

Ipsen USA secured multiple vacuum furnace orders during the Furnaces North America trade show in October and the streak continued throughout the remainder of the month, ending with a total of 16 new orders. Among the orders were nine Titan® vacuum furnaces — a record month in the 10-year production of the global platform product. […]

BigRep, the global leader in large-scale 3D printers, and Bosch Rexroth, one of the world’s leading suppliers of drive and control technologies, announced a development partnership. For the first time, 3D printers by BigRep will be equipped with state-of-art CNC control systems and drives by Bosch Rexroth, firmly establishing additive manufacturing as a key industry […]

Solar Atmospheres’ CEO Roger A. Jones was awarded the distinguished honor of ASM Fellow (FASM) at the ASM awards dinner held recently at the MS&T18 Conference in Columbus, Ohio. According to ASM, “The honor of Fellow represents recognition of distinguished contributions in the field of materials science and engineering, and develops a broadly based forum […]

Based on its LGG 280 generating grinding machine, Liebherr presented the larger LGG 400 M model at IMTS in Chicago. The new Liebherr LGG 400 M was developed with an eye toward aerospace and job shop customers. It fits into the same footprint as the smaller LGG 280, but is well-suited to machining long shafts […]

KISSsoft progresses in plastic gear use, offering 55 plastics for sizing

Gear units are increasingly being made out of different types of plastic. In many cases, this class of materials is a good alternative to steel. However, as the strength of plastics greatly depends on their temperature, determining material properties — which are needed for sizing gears — takes a lot more time and effort than […]

Retech worked with a Purdue University team in developing a new material and manufacturing process for generating electricity. Retech’s  Vacuum Induction Melting (VIM) furnace is used in the innovative project to make a way to use solar power, as heat energy, more efficient in generating electricity. According to the U.S. Energy Information Administration, solar power […]

KISSsoft modular software includes international calculation standards, as well as a multitude of sizing and optimization options for a wide variety of machine elements. The incorporation of customer experiences and company engineer’s passion for development allows KISSsoft to remain at the cutting edge of technology. KISSsoft facilitates the calculation of both strength and service life […]

MC Machinery announces Scott Lindley has joined the team as the new Pacific Northwest regional sales representative. He will use his vast knowledge in machining applications to support local customers and look to grow Mitsubishi Laser product sales. Lindley was an aviation electronics technician in the United States Navy and then went on to study […]

Röhm Products of America, a leading provider of high-quality clamping and gripping technology for the metalworking industry, offers further support for its Southeastern customers with the addition of Mike Brewer to its field sales team as regional sales manager for Alabama, Florida, Georgia, and Mississippi. In this role, Brewer will be responsible for supporting sales […]

In an effort to better serve customers in the U.S., Canada, and Mexico, eldec LLC unveiled a new website for manufacturing professionals who use induction heating, brazing, shrink fitting, pre-heating for laser, welding, or annealing in their manufacturing processes. The new site includes company and product information, trade show updates, as well as manufacturing and […]

Big Kaiser, a global leader in premium high-precision tooling systems and solutions for the metalworking industries, is expanding its range of Big Capto tool holders with the addition of a new size, C4, which is becoming increasingly popular as a quick-change system for turret tooling on lathes. In accordance with ISO 26623-1, the polygon shape […]

Solar Atmospheres of Western PA successfully commissioned a new 20-foot-long car bottom furnace that has a total load capacity of up to 30,000 pounds. The Class 2 furnace, built by John Becker’s Heat Treat Equipment Inc. in Canton, Michigan, was installed and fully tested for the first time in Hermitage, Pennsylvania. The 60-inch by 240-inch […]

This year’s Japan International Machine Tool Fair (JIMTOF), held in Tokyo in November, served as the venue for machine manufacturer Klingelnberg to introduce its latest innovations to Asia. The system provider presented the Höfler Speed Viper 300 cylindrical gear generating grinding machine with Koenig Automation, which is designed for high-production generating grinding in the large-scale […]