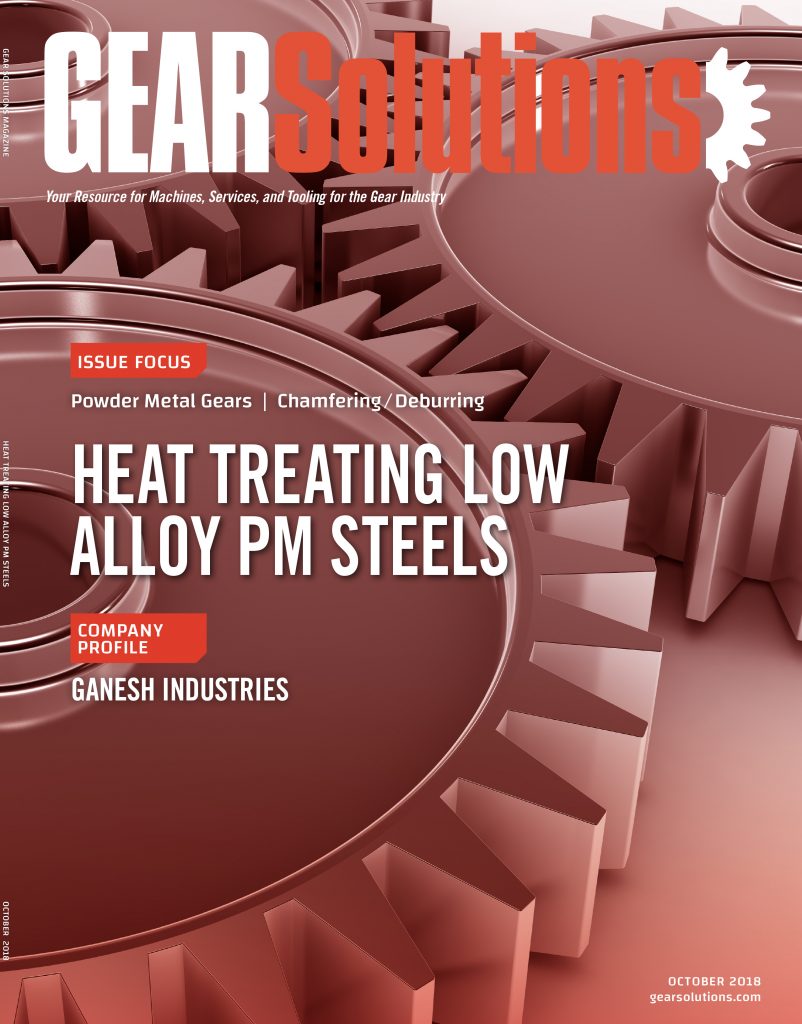 Humble beginnings as a small family business are still the driving force behind Ganesh Industries, even though the company has grown exponentially since it opened its doors in 1985. And that means that — as well as offering quality machines — Ganesh offers quality customer satisfaction, according to Kamal Grewal, marketing/sales director for Ganesh Industries. […]
Kenneth Carter

Autonomous steering and brake systems, hydro-pneumatic chassis, or radically improved gas mileage — these buzzwords represent a technological change that is triggering a domino effect in the automotive and other industries. An increasing number of components have to satisfy extremely demanding quality requirements. They need to leave the production process in perfect condition and without […]
EMAG

Examining the influence of tempering parameters on the microstructure and mechanical properties of heat-treated, low-alloy PM steels.

Tempering is a heat-treatment technique used to improve the strength, ductility and toughness of hardened carbon steels. Tempering occurs by heating the steel to below its critical temperature in order to transform the metastable body-centered tetragonal martensite structure that is formed during quenching into a more stable structure of fine carbide particles. Choosing the correct […]
Amber Neilan, Roland Warzel III, Bo Hu, Bob Aleksivich

With limitations on today’s industry standards for measuring steel cleanness, using the right mix of methods should be carefully considered.

The correlation of steel cleanness to the performance of parts made from steel has been recognized by engineers for many years. This has been especially true in the design and manufacture of anti-friction bearings and the establishment of the cleanness level for needed fatigue life as “bearing quality” steel. But cleanness is important for gears […]
James Carosiello

In this installment of his ‘Back to Basics’ series, the author discusses two new microstructural phases – martensite and bainite.

What’s a typical day like for you at Dontyne? For me, it’s pretty much a mixture of everything. I’m not just involved in the technical development of the software, but also the operation of the company. I’m also looking to attend exhibitions and progress meetings. I’m a director of the British Gear Association, and I […]
Gear Solutions staff

Selecting the proper tolerance for the bore and keyway can eliminate assembly headaches.

Have you ever purchased something that cautioned, “Some assembly required” on the packaging, only to learn later that even with a master’s degree in mechanical engineering the parts don’t seem to assemble in the same fashion as the instructions describe? This is typically an issue with the tolerances of the components in the assembly. When […]
Brian Dengel

Hard work and first-class teamwork between the gear factory Hänel and Hainbuch have paid off. The new mandrel Mando G211 for gear manufacturers, suitable for gear hobbing, gear cutting, and gear grinding, is now available as a standard mandrel from stock and can be used optimally on gear-cutting machines. This project was not only a […]

Motion Industries, Inc., a leading distributor of maintenance, repair, and operation replacement parts and a wholly owned subsidiary of Genuine Parts Company, announced the promotion of Pamela Sims to vice president of marketing, effective September 1, 2018. A graduate of the University of Alabama at Birmingham, Sims joined Motion Industries in 2004, starting in market […]

Eight years after the launch of the first Romer Absolute Arm, Hexagon’s Manufacturing Intelligence division has unveiled its new Absolute Arm range. A ground-up redesign has seen one of the world’s most recognizable portable measuring arms modernized to meet the needs of today’s metrology users, with a key focus on improved usability and versatility without […]

Emuge Corp. announced the groundbreaking for a 22,000-square-foot expansion to the current U.S. headquarters and manufacturing facility in W. Boylston, Massachusetts. The expansion will include additional manufacturing space along with a PVD coating center to support Emuge’s U.S. manufacturing business. In addition, Emuge plans to expand the current Technology & Training Center located on-site. Bob […]

Saint-Gobain Abrasives, one of the world’s largest abrasives manufacturers, announced the introduction of its new division, Performance Grinding Solutions (PGS). Saint-Gobain Abrasives created PGS in response to a strong demand for grinding process knowledge. This trend has been building due to a changing workforce, as well as the evolution of data collection and communication with […]

The future development impetus for the internal combustion engine will focus on the reduction of CO2 emissions. This is dependent upon fuel consumption, which in turn is determined by the internal engine friction. The goal of form honing is a form optimized cylinder bore under typical operating conditions. Gehring presented its emissions-reducing technology solutions at […]

Technology capable of thermally coating cylinder bores is a highly sought-after solution. High performance roughening is required to produce a reliable bond between the layer and substrate, ensuring all aspects of functionality. A positive interlocking connection is achieved by undercutting and the complete filling of the profile’s roughness; microscopically and evenly sprayed materials are crucial […]

Anticorrosive, chemical resistant, nonmagnetic, and lubrication-free, Kashima plastic bearings are uniquely designed to meet the varying and long-term demands of a wide range of applications. Kashima Bearings Inc., the leading manufacturer of plastic components in Japan, is known for its plastic bearings which are hand-machined to the highest precision standards. Dimensional tolerance, linear thermal expansion […]

MAQ, a developer of technologies that simplify machining by eliminating costly vibration, introduced the Self-Tuning Mass Damper™ (STMD) at IMTS 2018. This tool holder features a tungsten mass inside the tool. It is available in more than a dozen length-diameter combinations. By using the STMD™, parts manufacturers, machine tool builders and cutting tool manufacturers can […]

WEMA’s internal grinding machines maximize operating times with more efficient and integrated procedures. A repeatedly allocable tool and workpiece headstock are guided on up to six axes with an accuracy of 0.1 µm. WEMA SI is scalable and is adapted to the clients’ needs through specific mounting for the greatest machining efficiency. Powerful drives ensure […]

The Coordinate Metrology Society® (CMS) announced the launch of its new digital library of original technical papers delivered by metrology experts over the past twelve years at its annual conference — the Coordinate Metrology Society Conference (CMSC). The library is an online archival of more than 100 technical papers and journals covering a broad range […]

Digital Metrology Solutions, Inc., developers of measurement software, technologies, consulting and training, have announced the release of OmniSurf3D for 3D surface texture visualization and analysis. The new software provides a suite of three-dimensional surface analysis tools that can be quickly mastered by non-metrology experts as well as advanced users. “Some years ago, we recognized a […]

For shafts with plain bearings, the bearing type “plain bearing” can now be redefined. This is especially important for turbo drives, as it allows the shaft center dislocation during operation to be precisely taken into account (module WB3). In KISSsoft’s plain bearing calculation, the required values — especially the displacement path, attitude angle, and stiffness […]

THK America, Inc. is taking major steps to meet the growing worldwide demand for linear motion products. In fact, as the world leader in linear motion guides, THK has recently invested over a half-billion dollars in new brick and mortar facilities that will increase floor space for its global manufacturing operations to just under 10.5 […]

Two new grinding machines were recently added to production at Gear Motions’ Nixon Gear Division in Syracuse, New York. The Studer S121 is a 2-spindle universal cylindrical grinder capable of grinding IDs and faces. It was purchased to accommodate a program for a new customer with Nixon Gear. The machine adds new capabilities to grind […]

Methods Machine Tools, Inc., North America’s foremost supplier of leading-edge precision machine tools and automation, has appointed Sergio Tondato as Nakamura-Tome product manager. Tondato has stepped into the role as Richard Parenteau, director of application development/Nakamura-Tome, retired from Methods after 29 years with the company. “We are wishing Rich all the best in his retirement […]

Okuma America Corporation, a world leading builder of CNC machine tools, announces that Summer Cline has joined the company as vice president of finance. In her new role, Cline will handle finance responsibilities as well as oversight of accounting, human resources, and information technology. “Summer brings 12 years of successful project management experience, along with […]

The 31st edition of the BI-MU trade show, one of the most significant Italian trade shows for machine tools, robotics, automation technology and digital manufacturing, was held in Milan, Italy, in early October. Mechanical engineering company Klingelnberg was represented at the trade show with its subsidiary, Klingelnberg Italia S.R.L., to present innovative solutions for production […]

Hexagon’s Manufacturing Intelligence division announced Zachary Cobb, Director of Engineering and R&D in North America, will be the keynote speaker at the 2018 ASQ Inspection Division Conference. The conference is October 18-19 at the Fogelman Executive Conference Center & Hotel in Memphis, Tennessee. On Thursday, October 18 at 8:45 a.m. Cobb will present “Shaping the Future […]

Starrett gages can be used handheld or mounted

L.S. Starrett Co. (http://www.starrett.com), a leading global manufacturer of precision measuring tools and gages, metrology systems, and more, has introduced its DFC and DFG series of digital handheld force gages. Depending on the series, advanced automatic testing can be attained with the DFC Force Gage controlling a Starrett FMM digital force tester, or basic testing […]

At this year’s Japan International Machine Tool Fair (JIMTOF) in Tokyo November 1-6, 2018, machine manufacturer Klingelnberg will introduce its latest innovations to Asia. In Hall E1082, the system provider will present the Höfler Speed Viper 300 cylindrical gear generating grinding machine with Koenig Automation, which is designed for high-production generating grinding in the large-scale […]