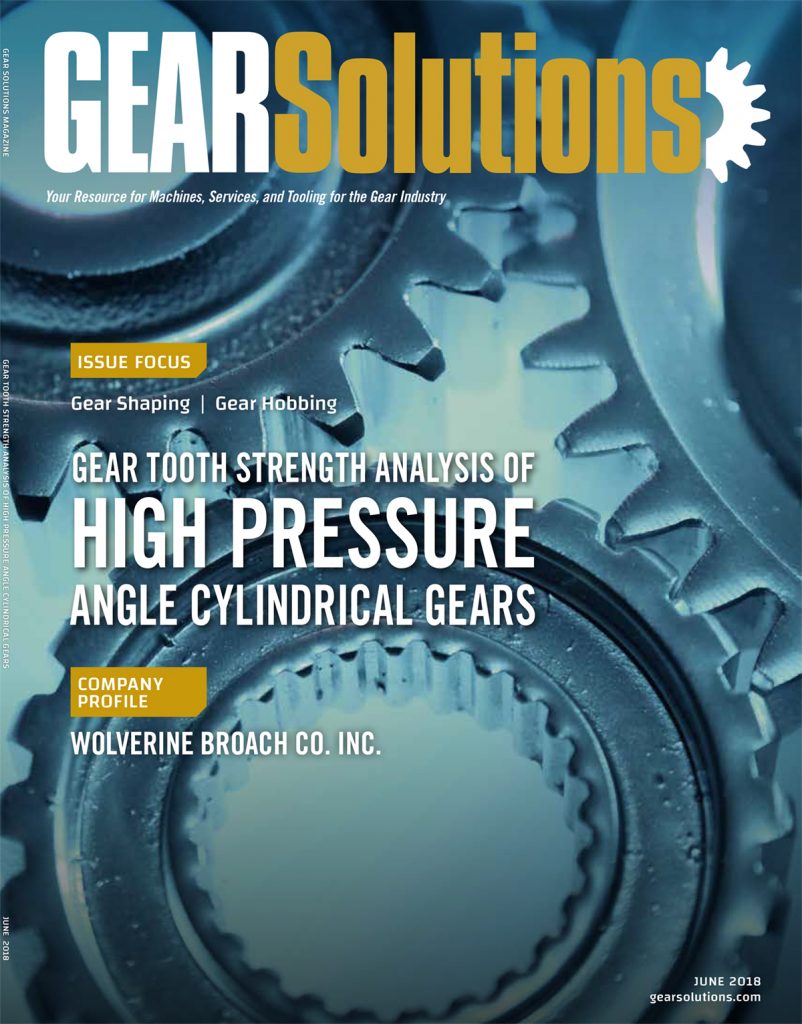 Broaching can be quite the competitive arena in the manufacturing world, so it’s imperative for a company to take those extra steps to bring customers to its door. At Wolverine Broach Co. Inc., company President Bernard J. Aude Jr. prides himself in that ability. “We’re considered a small organization, which allows us to fly under […]
Kenneth Carter

Finding the addendum modification coefficient using the base tangent length (BTL) method is found to be useful for gear parameter evaluation of an unknown gear.

By Prasmit Kumar Nayak, A. Velayudham and C. Chandrasekaran Evaluation of geometry of used and broken gear is a seldom practice followed in the fields such as maintenance repair and recycling. Although gear calculations and main parameters are standardized, this task can be complicated, especially when there is no information about mating gear and gearbox assembly, […]
Prasmit Kumar Nayak

Ask Chuck Chandler, plant manager at SEW Eurodrive USA in Lyman, South Carolina, about the range of applications for the spiral bevel gear units produced there, and his response is simple: the world. The ultra-modern 385,000-square-foot facility, winner of Plant Engineering Magazine’s Top Plant Award in 2007, is running three shifts a day, six days […]
Uwe Gaiser

The gear tooth strength of high pressure angle gears is studied and compared with that of conventional pressure angle gears. The comparison is carried out regarding contact pressure, contact and bending stresses, and the loaded function of transmission errors. The gear geometric models are generated by the computerized simulation of the manufacturing process, and the […]
Alfonso Fuentes-Aznar, Ignacio Gonzalez-Perez

Director of Quality at Riverside Spline and Gear Inc.

Worm gear pairs are an excellent design choice when you need to reduce speeds and change the directions of your motion, and they have many other applications as well.

First published in 1973, the novel How to Eat Fried Worms by Thomas Rockwell tells the story of Billy and his desire to win a bet by eating a worm a day for 15 days. Although the thought of eating worms is not something most of us would consider doing, Billy finds a way to […]
Brian Dengel

Why keeping CO content of a furnace must be stable at a value of 20 percent is critical for accurate carbon control of the endothermic atmosphere.

During heat treatment, the part experiences different temperature regimes (Figure 1). Atmospheres are used in heat treating to protect the part from scaling at the elevated temperatures used during austenitizing. The atmospheres range from simple wrapping the part in stainless steel or tantalum foil for small tool room parts, to protective atmospheres containing inert or […]
D. Scott MacKenzie, Ph.D., FASM

Big Kaiser presents the Torque Fit, a tightening fixture for collet chucks with an integrated torque measuring system. This device makes it easy to ensure that a collet chuck is correctly tightened. Proper tightening is an important first step of high-precision cutting. Big Kaiser’s Torque Fit notifies the user of a correc tly set torque […]

Yamazaki Mazak Corporation has announced the start of assembly operations at its latest production facility in Inabe City, Mie Prefecture, Japan. The company celebrated the completion of the initial construction phase of its sixth Japanese Mazak facility and 11th worldwide with an open house. While the final stage of construction is ongoing, the Inabe plant […]

For the 2018 International Manufacturing Technology Show (IMTS), Seco will spotlight the company’s innovative new tools and growing range of services at booth #431564 in the West Hall. Additionally, Seco will offer visitors the opportunity to interact with its products and technology via an immersive augmented reality (AR) experience. Among Seco’s exciting new tooling solutions […]

Röhm to feature diverse line-up of workholding solutions at IMTS

At IMTS 2018, set for September 10-15, Röhm Products of America will present a wide range of workholding solutions that lead to higher levels of efficiency in turning, milling, grinding, and drilling applications as well as enable lights-out manufacturing. The workholding specialist will also demonstrate how the company is a single source supplier for chucks, […]

Star SU of Hoffman Estates, Illinois, announced the appointment of Riccardo Rubino as its new operations manager for the Americas. “Riccardo brings operations and supply chain leadership experience from positions held both in the U.S. and Italy,” said David Goodfellow, president of Star SU LLC. “He will work closely with me overseeing operations starting with […]

Mazak to spotlight HYBRID multi-tasking in booth at IMTS 2018

At the 2018 International Manufacturing Technology Show (IMTS), Mazak will feature its advanced HYBRID Multi-Tasking technologies in booth #432000 in the West Hall, and 30 of its newest machine tool and automation systems in the South Hall at booth #338300. New to the South Hall booth this year is the Mazak Digital Plaza, a special […]

TEKT Toyoda Americas Corporation welcomed ACI Machine Tool Sales, LLC as the latest edition to its distribution network. ACI Machine Tool Sales was founded in 2001 by owner Mark Cox, originally selling and servicing machine tools in its home state of Kentucky. ACI’s continuous success has led to a growing team of more than 15 […]

At IMTS September 10-15 in Chicago, FlexArm Inc. will feature a mobile tapping package that yields mobility, productivity, and efficiency by allowing operators to tap holes offline while the machining center works on the next part. FlexArm will occupy booths #432115 and #236430. This comprehensive package includes the FlexArm GH-18 tapping arm with a tap […]

Big Kaiser Precision Tooling has named Gillian Campbell as its marketing communications manager. She will oversee the company’s marketing efforts. “Gillian is an experienced marketing professional with a background in manufacturing and metrology. I’m confident Gillian will be a good fit for Big Kaiser and round out the talented group we already have in place […]

Brian Papke, chairman of manufacturing technology leader Mazak Corporation, has been inducted into the Northern Kentucky Business Hall of Fame. He accepted the award in April at the Metropolitan Club in Covington, Kentucky, where he delivered remarks that credited Mazak’s customers and its employees for the company’s decades of success across North America. “Our customers […]

The Whittemore Co. has added the cutting tool brands of Precision Twist Drill, Dormer, Pramet and Union Butterfield to its already broad portfolio of products it represents. These brands are manufactured by Dormer Pramet, which has North American Headquarters in Elgin, Illinois. The company has a history in America dating back to its founding in […]

This year, Methods Machine Tools, Inc., North America’s foremost supplier of leading-edge precision machine tools, automation, and additive manufacturing solutions, is celebrating its 60th anniversary. Founded in November of 1958 with three employees and a few refurbished machines, Methods has grown into one of the largest, most innovative, high-precision machine tool suppliers in North America. […]