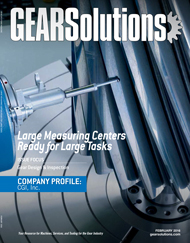 As a fledgling gear design and manufacturing company that began in 1967, CGI developed a reputation early on for quality products and innovative solutions, particularly in the medical and aerospace industries. Founded by Don Snow and based in Southern California, the company was named California Gear and Instrument at that time. Garnering customers such as […]
Molly J. Rogers

This paper demonstrates a modification to the analysis of Tooth Interior Fatigue Fracture, as implemented in SMT’s MASTA software, in which Loaded Tooth Contact Analysis (LTCA) results from a specialized 3D elastic contact model have been utilized to determine the load boundary conditions for analysis of Tooth Interior Fatigue Fracture (TIFF) to the method of […]
Gear Solutions Magazine

A practical method using conventional measurement tools is proposed to obtain the fundamental gear parameters needed for the reproduction of a new cylindrical gear according to ISO standards by a generation cutting process or for a basic reference in calculating load capacity.

Automotive manufacturers in particular are leaving no stone unturned in their efforts to drive cost out of their gear production and inspection processes. For many, the wasted time needed to transport finished gears to the lab — and the additional time needed for parts to work their way through the queue — represent a significant […]
Dennis Traynor

A redeveloped range of large industrial measuring centers meets the current market need for high-precision measuring to assure quality and design in the manufacturing process of large gears.

In manufacturing, precise measurements are the cornerstone for complying with tight tolerances and ensuring the efficiency of the entire operation. Large measuring centers have to be fast and easy to operate in order to determine the current quality of the workpiece and decide on any necessary corrections in the process chain. The inner life of […]
Dipl.-Ing. Gunter Mikoleizig

To avoid uncertainty, the complete roughness specification for the tooth flank and description of the contact stylus profilometer setup should be placed on the gear drawing.

In the January Materials Matter column, “Roughness Measurement of Precision Gear Teeth,” the importance of accurate and repeatable roughness measurement of precision gear teeth flanks was explained. However, an accurate rough measurement cannot be repeatable if it is not explicitly specified by the designer for use by the gear manufacturer and end user. As smoother […]
Mark Michaud

The ultimate accuracy of gearing and how well it satisfies the customer depends upon variables such as application, specifications, design, and process.

As the most demanding yet common mechanical system in a gear train, gearing provides a mechanical interaction to transmit power while changing torque and speed. To achieve a quality design, there are many variables to consider. Here, an overview of four major elements (application, specifications, design, and process) is presented, while subsequent Tooth Tips articles […]
Matt Mondek

Strides in R&D are the driving forces behind high customer satisfaction and continuing growth in gear manufacturing.

Components of R&D are critical to the industry’s innovation and ability to meet customers’ specific needs. Take Chicago-based Winzeler Gear, for example. Founded in 1940 as the Winzeler Manufacturing & Tool Company by Harold Winzeler, the company has made a name for itself in the precision molded plastic gearing industry through its aggressive and creative […]
Anna Claire Howard

Thermochemical surface engineering using plasma nitriding can improve the properties and performance of gears made of steels and titanium alloys.

Wear, corrosion, and fatigue failures are the most important mechanisms that lead to material degradation, which eventually causes failure of many gears. Those failures involve mechanical and/or chemical interaction of the material component considered with loads imposed by the environment.  Hence, material performance and service life rely, to a high degree in many cases, on […]
Dr. Edward Rolinski

Tell us a little about yourself and your team at Delta Inspection. I’ve been with the company since April 2012, and I’m tasked with business and customer development strategy. Our expert metrologists on the team include Sam Lindhorst, principal metrologist and quality manager, and John Schultz, senior metrologist. Sam has over 40 years of metrology […]
Gear Solutions Magazine

Fowler High Precision announced the addition of new mobile tech centers (MTCs) and 3D mobile tech vans, which will travel across the United States, equipped with the newest, most popular, and technologically advanced products in measurement and inspection. These leading-edge mobile showrooms allow customers and distributors the opportunity to see and use a wide array […]

Bodycote, a leading thermal processing services provider, announced the launch of its “Interactive History of Metallurgy” after taking a look back at the long history of metal processing and heat treatment. With more than 200 high-quality images and numerous videos, Bodycote pays homage to the artisans from thousands of years ago along with the scientists […]

With any industry, staying up-to-date on new methods and industry innovations is a key contributor to success. Ipsen is preparing to host another series of Ipsen U classes throughout 2016 with remaining courses available April 5-7, August 2-4, and October 11-13. A class will also be offered in June with more details coming soon. These […]

Transor Filter USA has released a new corporate brochure. The eight-page brochure provides a brief overview of the company’s 40-plus year history, an explanation of the benefits of their One Micron Filtration capability (OMF), a quick summary of the various market segments served, and a general description of the filter options available. According to Transor […]

OSG USA, Inc. recently announced its sponsorship of the Society of Automotive Engineers (SAE) Mini-Baja Racing Team at Purdue University Calumet and the Human-Powered Submarine Team at the University of Michigan. OSG donated over $30,000 in new tooling to the teams to support their manufacturing activities. OSG has been actively working with technical colleges and […]

Signalysis, Inc., the leading provider of end-of-line production test systems for automotive, medical, home appliance, and related industries, recently announced the latest release of its leading SigQC™ software. SigQC analyzes components, subassemblies, and products to pinpoint NVH (noise, vibration, and harshness) issues and determine in real-time if quality goals are met. The system can be […]

Royal DSM — a global science-based company active in health, nutrition, and materials — announced that a special lubricated grade of its Stanyl® polyamide 46 has been chosen for low-friction slide shoes within the timing system on a new generation of energy-efficient turbocharged petrol engines. The timing system parts are produced by the EU-based precision […]

PRODUCT SHOWCASE: Walter Surface Technologies Expands its Portfolio of Finishing Discs with the Enduro-Flex 2-in-1 Turbo

Briney Tooling Systems is known for their custom and special toolholder design and build capabilities. They have a special design team in place that works daily with customers to design and build the special tools needed for a wide array of applications that many times other toolholder manufacturers are unwilling to even attempt. Recently, Briney […]