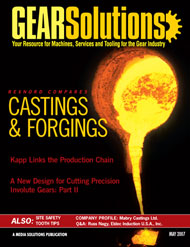 With a history of dedication to service & quality, this company is poised to provide gear manufacturers with the castings they need to ensure success.

When you’re a foundry located in Beaumont, Texas, it’s to be expected that you’ll pursue contracts with the petrochemical industry. But when you’ve been around for 82 years and have seen other businesses suffer for concentrating on a single industry, you learn the importance of diversification. “And that’s exactly what we’ve done,” says Jeff Freeman, […]
Gear Solutions Magazine

As part of the Kapp Group, Niles has designed machines that decrease the cost per piece while increasing the quality of the finished parts.

The form grinding process has dramatically increased the efficiency of gear grinding machines, and consequently the productivity of gear shops. New tools and advanced CNC controls facilitate faster cycle times; this pushes the process closer to its limits, however. Progress is made in small steps, but only with less stable process conditions as a result. […]
Bill Miller, Sascha Ungewiss

Abstract This paper is aimed at the development of a novel design of precision gear hob for the machining of involute gears on a conventional gear-hobbing machine. The reported research is based on the use of fundamental results obtained in analytical mechanics of gearing. For solving the problem, both the descriptive-geometry-based methods (further DGB-methods) together […]
Dr. Stephen P. Radzevich Ph.D., Dr. (Eng) Sci.

When designing large structural components it’s critical to make an informed decision between castings and forgings. The following paper by Rexnord provides an in-depth examination.

Material selection is one of the most crucial decisions made in the design, manufacture, and application of large structural components. Material selection naturally influences the entire performance of the design, and thus it is critical that informed decisions are made during the design stage. Steel castings and steel forgings are two alternatives for large structural […]
Tim Zwirlein

Shot peening offers a variety of benefits to gears, including added strength and reduced surface fatigue. The past—and future—of the process are discussed in this installment.

In the 11th century, every combatant carried a sword. Swords were thick and heavy to prevent breakage, making them unwieldy in battle. Those who were wealthy could buy a lightweight, virtually indestructible sword blade from Toledo, Spain. Over the ages the secret of their manufacture was not revealed until the 1970s, when X-ray diffraction detected […]
William P. Crosher

GS: You joined the company in February. What attracted you to the position? RN: I had worked with the president of Eldec U.S.A. years ago at another company, and when he contacted me about the job I did a little research and found that it has a unique induction hardening technology that I found very […]
Gear Solutions Magazine

Seeking input from your employees is one of the best ways of helping you create—and update—a comprehensive and effective safety plan.

Well, here we are again, it’s springtime. As I write this column—which was composed in early April, by the way—I am looking out the window at the snow that is coming down. Of course, we know it won’t last long, and soon the flowers will be blooming and the grass will need mowing. As beautiful […]
Terry McDonald

Schiess Brighton GmbH—the newly formed company that specializes in the design and construction of very large vertical lathes, horizontal boring mills, and gantry mills—has concluded an agreement with CITIC Heavy Machinery Corp. to design and build a gear hobber that will produce gears up to 16 meters (52 ft) in diameter. CITIC is one of […]

Haas Automation Asia is pleased to announce the official opening of its brand-new 72,300-square-foot China Headquarters and showroom in Shanghai. The move comes just three years after the company first opened its Asian operations in the city’s Waigaoqiao Free Trade Zone. In that time Haas’ business in China has increased dramatically, and the company has […]

AMT Partners with Ethnometrics to Measure Purchase Experience at IMTS 2008

The Association For Manufacturing Technology (AMT) announces its partnership with Ethnometrics to measure the “purchase experience” at IMTS 2008 in September 2008. IMTS is the largest show to apply this type of research to the trade show experience. “Purchase experience” refers to the science of measuring the effectiveness of a selling environment in creating a […]

Officials of Philadelphia Gear Corporation have announced the availability of two versions of the company’s proprietary CORE, or Continuous Oil Rescue Equipment. Launched as an alternative to traditional barrier filtration techniques, the CORE models filter metallic particles as small as one micron (one-millionth of a meter). Unique to Philadelphia Gear, these filters are now designed […]

Made in the U.S.A., and custom designed for industrial and commercial duty OEM applications, Bison Gear & Engineering Corp.’s new line of AC motors is detailed in an informative, six-page capabilities brochure. The brochure includes outline drawings for three versions each of the new 34 frame (3.39" dia.) and 49 frame (4.91" dia.) Bison AC […]

Optimol Instruments has introduced the newest generation of the SRV test, the SRV® 4 test system. This leading system platform offers dual motion by integrating oscillation and rotation movement into one instrument for evaluating friction and wear. Even the most complex tribologic environment can now be modeled with a precision that was never before possible. […]

Specifications for the Unilock Clamping System are now available in a 24-page color catalog from BIG Kaiser Precision Tooling, Inc. The catalog details how Unilock can help reduce set up time and part processing time. Unilock’s simple clamping concept provides a comprehensive system to position and clamp workpieces for the most efficient part loading. Unilock’s […]

ABLE Machine Tool Sales will be holding an Open House at its newly expanded Tech Center and showroom on Tuesday, May 22, through Thursday, May 24, 2007. ABLE’s expanded facility includes a new, fully equipped showroom and demonstration area, as well as an integration bay for machine customization and turnkey engineering projects. The Open House […]