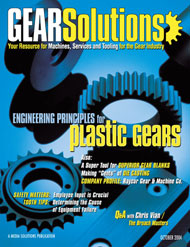 Paying attention to details and growing in a methodical manner has allowed Dan Schwartz to break from the pack and emerge as an American success story.

Fifteen years ago Dan Schwartz found himself in a bit of a professional quandary, caught somewhere between the shop floor and a glass ceiling. “I’d spent about eight years working my way up from running machines to middle management at a company called Patterson Gear,” he says. “That’s when I realized I wasn’t satisfied with […]
Russ Willcutt

Cost savings, a streamlined production process, and increased quality are only a few of the reasons why die casting is an excellent alternative for manufacturing small gears.

For many applications, zinc alloy die cast gears provide an opportunity to dramatically cut manufacturing costs and improve part-to-part consistency. The cost of simple spur gears, as well as complex helical and worm gears, can be cut by up to 80 percent. Die casting can enhance rack gear performance by incorporating features unattainable by other […]
Stuart Burke

In many instances, plastic materials perform markedly better than do metals—especially in gears. Read on to learn the details that will allow you to make the best choice for your operation.

Since founding Timco in 1967, I’ve been riding a steep learning curve regarding plastic materials and the machine parts that we make from engineered plastics. Just when I thought that this strenuous curve was about to level off due to my retirement, my colleagues asked me to write about machined plastic gears. I hope this […]
Rudy Walter

With benefits including no heat buildup or chip problems, rotary saw cutting has emerged as the premier process for producing quality gear blanks.

It stays cool, it doesn’t produce problematic chips, it cuts with ease … it’s the Super Tool! Well, not really. It’s simply a rotating circular saw blade. But the circular saw blade is too often overlooked as a possible tool when making parts turned from bar stock, such as gear blanks. Screw machine operators have […]
Fritz F. Greulich

Since employees are on the front lines of the manufacturing process, their input is crucial–especially when it comes to safety concerns.

“Am I going to get in trouble if I point out what I think is an unsafe practice?” If you are like me and came up through the ranks, so to speak, you probably remember when you had thoughts like this. Is it possible that your fellow employees have the same concerns when they see […]
Terry McDonald

Think like a detective when it comes to determining the cause of equipment failure… keep an open mind, and be sure to preserve all of the evidence. It’ll pay off in the long run.

When failures occur, especially on a piece of critical equipment, the first priority is usually to get the equipment operating again. Unfortunately this can result in the loss of valuable information as to the cause of the failure and lead to more failures down the road. During the investigation, remember that pitting or bending failures […]
Andy Milburn P.E.

I understand that you had a booth at IMTS. What was it like this year? A lot better than 2002. There was more optimism, with people saying they’re busy and getting busier, so that’s always a good thing to hear. I think everybody has a much more positive attitude about the economy and the way […]
Gear Solutions Magazine

In a recent press release Danaher Motion introduced the Micron Gearhead RediMountTM Motor Mounting System. The system features a simple three-step mounting procedure that allows all Micron gearheads to be mounted to any available motor, regardless of manufacturer. This flexible system also facilitates fast and easy changeover to alternate motors in the field. "The unique […]

Precision Gage & Tool Company has introduced the new P-400 DRO Metrology Interface, an advanced multifunction gaging terminal that is ideal for air/electronic and electronic gaging systems. Offering intuitive visual displays, the P-400 can apply mathematical formulas to measurement data from up to 16 output channels for on-the-spot analysis. It offers SPC analysis from an […]

On October 1, Media Solutions, Inc.–which produces Gear Solutions magazine–issued the Machine Shop Solutions Card Deck. The deck will be of great value to those who receive it for a number of reasons, according to David C. Cooper, president of Media Solutions. "This is a great way for our clients to build a mailing list, […]

The new Gf-bdlc gear motor by Merkle-Korff Industries offers extended life, high efficiency, brushless technology, and provides up to 300 in/lb. or output torque over a variable speed range of one to 30 rpm. The heavy duty GF gearbox has been combined with a 2.25" double ball bearing brushless motor which features ultra-quiet operation and […]