Home Features TWIN Blade – A Cut Above the Rest

In the search for optimizing cutting performance, not only do improvements in the surface coating have to be considered, but also the use of the existing cutting edges.

All classic stick-blade cutting processes require a blade geometry that subordinates itself to the requirements of a positive rake angle — approximately eight to15 degrees — and a sensible relief angle. This means, as a consequence, that on each blade either a cutting edge for the outer side or a cutting edge for the inner side has to be realized. The cutting edge with the negative rake angle, which is not active, is displaced to avoid contact with the opposite flank. Hereby, over the length of the cutting profile — especially on the tip — areas are created which have to cut chips with different thicknesses. These differences cause undesirable uneven wear behavior. (Figure 1)

A new, totally different approach led to the development of the TWIN Blades. At a rake angle of zero degrees the left and right cutting edge of a blade are technologically equal. If one would reduce the quality of cutting to just a pure chip formation, these conditions would not be defined as optimal. In the TWIN Blade process two equal cutting edges are present, and the blade can be formed in such a way that it can simultaneously process the convex and concave flank of the workpiece. This procedure works especially well with circular arc teeth with constant gap width. The technological disadvantage of the poorer chip formation with a zero degree rake angle is more than compensated for by the double number of flank-forming cutting edges. As TWIN Blade cutters always have the maximum tip width, the optimum cutter rigidity is always guaranteed.

Due to the rake angle of zero degrees, higher cutting forces are created, therefore not every machine is suitable for the application of TWIN Blade tools. Only machines with sufficient drive power, and at the same time high spindle dynamics, permit the TWIN Blade potential to be fully utilized.

TWIN Blade chips are twice as heavy as those from traditional tools. The reason is the long cutting edge of a single Twin Blade, which covers the entire length from left to right profile, as well as the complete tip. In the process typical V-shaped chips are created, and due to their higher weight reliably fall into the chip conveyor. (Figure 2)

TWIN Blades offer further potential regarding the improved operating life of the tool. Due to the elimination of the plunging process, the cutting load on generated workpieces can be shifted from the tip of the blade to the flank. In comparison to fully coated classic blades, the tool life of a TWIN Blade be increased by approximately 30 percent, and the processing time can be reduced because there are twice the number of blades. (Figure 3)

But the cutting process with TWIN Blades does not only represent a remarkable jump in performance, it also leads to a significantly better pitch quality. The reason for this is easily seen: the traditional chip form created during the generating of pinions show a tendency to distribute themselves over the space between the two blades and the two tooth flanks. Often several of these chips are wedged between the unused, and somewhat recessed, inactive cutting edge of a blade and the flank. An enormous pressure is hereby exerted on the blade, and this often reacts with carbide chipping. The tool wear rapidly accelerates, and these chips can scratch the already machine-finished work piece surface. This leads to problems with quality control, as no differences between surface defects and real spacing errors are made. Only determining the measuring point that is relevant for the pitch result can present a problem. Whether it is a real spacing error or a scratch does not matter, in practice. Due to the technology, as TWIN Blades fill the entire gap with circular arc teeth, no scratches can arise from stuck chips. Cutter Heads for TWIN Blades

TWIN Blades are not more expensive than conventional cutters, but they operate substantially more efficiently since they can be applied in all cutter heads that are equipped with a rectangular slot for the stick blade. It is recommended to use the most rigid construction — such as ARCON heads, for example–as the processing forces will invariably be higher.

In respect to the perfect application of the blades, they must be precisely adjusted in axial as well as in radial direction. With modern equipment such as the Oerlikon CS 200 and precisely manufactured cutting heads such as those of the ARCON series, this can be realized quite easily. Here again the advantage of a practical inter-coordinated system of cutter head construction and an automatic adjusting unit can be proven. Every practically oriented person knows the problem of chipping that can occur during tightening of the clamping screws of the cutter head. In order to avoid all movements of the adjusted blades through the tightening process, two different screws are used.

Identical Blades in Every Slot

The upper screw is provided with a coil spring. Before the automatic positioning of the blades in the cutter head, neither of the two screws — only the spring — is in contact: the spring holds the blade in the slot in such a way that it can be adjusted axially. When the final position of the blade is located, then the lower screw is tightened. This screw has a rounded head that only touches the blade in the center of the screw axis. During the tightening of this screw no forces arise that can move the blade up or down. Subsequently the upper screw is tightened, which also has a rounded head. Through this simple principle the blades are precisely and quickly fixed in the correct position in the cutter head.

A logistic simplification can be realized when all the slots of a cutter head are identical. Then identical TWIN Blades are mounted in both the inside and outside slots. This is surely a distinct facilitation of work in the practical aspect of tool conditioning.

TWIN Blade cutter heads are also different in another way. Up till now, increasing chip removal performance was the highest goal. The higher the number of blades, the better the tool performance. One borderline is given from a minimum cross section that a blade must have due to reasons of rigidity. A second borderline is described by the chip space between the blades, where chips can be formed while the blade is in the gap. If this space for chips is too small, then the chips form “packets” until the chip space is full and the blade breaks off.

The space for chips with gearset sizes for automobile applications does not play a large role due to the low face width, but with heavy vehicle bevel gears surprises can sometimes occur. The greater the face width, the more space is required between the blades. The classic dilemma of contradictory goals — on the one hand performance, on the other hand chip removal — can be elegantly circumvented by the application of TWIN Blade cutting heads. (Figure 4)

A customer required the production of large pinions to be manufactured with high-performance tooling that had a narrow blade tip width. The combination of narrow tool tip and large tooth height led to large chips needing to be transported away through a small area. With this application the first tool designs showed strongly scratched surfaces and increased tool wear. In this respect requirements were made and no production release was issued. Changes to the process did partially lead to a better surface quality, but also to higher tool wear. As a solution, it was found that the application of TWIN Blades on an Oerlikon C 27 was the only acceptable path. Within the framework of this investigation — and also due to capacity reasons — a different free form machine was tested. It was found that, due to rigidity and compensation reasons, it did not lead to the same good production results. (Figure 5)

With one of our customers, within the framework of a tool grinding service contract Klingelnberg tools came into application. The tool construction used until then consisted of only face coated tools. Due to the good results of fully coated Klingelnberg tools, the full coating was introduced overall for the series production. As in the framework of a grinding service contract developments can be easily documented, TWIN Blade tools were also brought into application. Through the innovative component and TWIN Blade tool geometry, high feed rates could be realized. The pinions could be cut so fast that nearly no temperature compensation was necessary. The pieces came out of the machine distinctly cooler compared to the use of conventional tools. A second aspect of the use of the conventional tool involved problems with scratched surfaces. These could be completely eliminated through the use of TWIN Blade tooling. 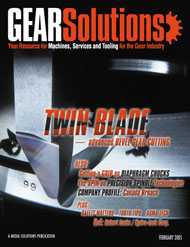