As gear grinding on modern CNC machines evolve, Kapp has introduced a modern method for the similar application on gear tools that could be used on internal teeth as well.

The word “topological” is often an over-used and misapplied adjective for design philosophies and manufacturing methods of gears. In the late 1970s, Maag used “Topological Modifications” with their SD series of zero degree dry grinding machines.

The Maag zero degree method used single-point contact between the wheel and gear flanks during grinding and was capable of producing nearly unlimited freely defined modifications on the tooth flank (Figure 1).

Application on large module drive pinion gears or shafts was envisioned for industrial gearing, but the cost of implementing was high and the cost to grind even more prohibitive. Design and manufacturing philosophy simply demand that the base pitch remain constant along the line of action as teeth mesh (Figure 2). But application for gear manufacturing tools such as shave cutters, rolling dies, and diamond dressing gears can utilize and even require similar dramatic modifications that cannot be produced with other methods. Therefore, the method and machines are still in use today.

As gear grinding on modern CNC machines evolved, Kapp introduced a modern method for the similar application on gear tools that could be used on internal teeth as well. Grinding was done with a single point contact between the grinding wheel and tooth surface. Precision, reliability, reproducibility, and ease of use were all improved. Furthermore, on-board inspection reduced iterations to the lab for validation. An advantage of this technology is that the machine can also be used for productive full-form profile grinding of high quality gears and master gears.

This can be described as a generative process, in that the involute is a result of multiple axes interpolation. By rotating the workpiece and simultaneously radially altering the center distance between workpiece and grinding wheel, the profile can be “generated”. With an additional movement parallel to the rotational axis of the workpiece, every point on the gear flank can be reached (Figure 3 and Figure 4). The available processing types are the axial stroke and the radial stroke (Figure 5 and Figure 6).

In the case of axial stroke, the feed direction is towards the rotational axis of the workpiece. Consequently, the involute emerges from a profile radius-envelope curve. In contrast, envelope curves are formed in direction of the tooth width from cuts through the body of the grinding wheel in the contact plane of the gear. If these cuts are approximated to circular arcs, then these arcs have considerably larger radii than the profiles. Typical modifications for diamond Coroning® rings and diamond dressing gears are shown in Figure 7. Note that tooth “bias” can be combined with other modifications.

Extreme modifications are also possible due to the point contact. Figure 8 illustrates a wavy gear flank with superimposed profile crowning and lead crowning. A gear flank modification with diagonal relief is depicted in Figure 8 and Figure 9.

Research continues to find a modification that optimizes the tooth shape to maintain a constant base pitch throughout the mesh, as mentioned earlier. A relatively recent PhD dissertation by, Cameron Reagor of Penn State, introduces such a method to virtually eliminate transmission errors on helical gears. In what he terms the “Fourier Null Matching Technique”, modifications are calculated which adjust the contact zone, considering the full range of loading anticipated. In his conclusion, he acknowledges the required accuracy for gear grinding. “With a mean step distance on the order of 0.5 mm, it is realistic to attempt to manufacture the negative ‘s’ portion of contact region for the deformation ranges of 5 μm to 25 μm.”

In fact, grinding machines today respond with good repeatability to sub-micron changes. Reagor goes on to speculate that only part of the modification required can be produced by modern grinding methods. That isn’t entirely clear, but it is common that the best theory is not practical. In fact, the most productive gear grinding processes create unwanted modifications, such as tooth twist (also called bias). What follows are several methods to compensate or target a specific amount of tooth twist. These methods also use the word “topological”, but with a different purpose.

I came upon the term “tooth twist” 35 years ago while implementing shave cutter sharpening with a form grinding process (Red Ring Periform Grinder). It did not seem significant or even relevant at the time, since the involute was specified at the mid-point of the face width and lead at the pitch diameter. And after all, the tooth of a helical gear is twisted by design, isn’t it?

In time it became clear that undesired tooth twist could be imparted by shaving a helical gear with lead crown depending on the method of cutter sharpening. Twist contributes to transmission error and thus potentially to gear noise. Often it is not recognized due to the way the quality is specified. A ground gear can be made to the highest quality but the twist remains because it is a trigonometric certainty based on the amount of lead crown and method of grinding.

The Origin of Natural Tooth Twist

According to ISO 21771:2007, the twist is the difference between the profile angle deviations at the ends of the usable gear flank. The same applies of course to the flank line deviation (Figure 10). Twisting arises both in profile grinding and in generating grinding of crowned gear flanks. The main cause of this is the spatial extension of the contact line between the workpiece and tool. Here, the form of the contact line differs depending on the processing. This has the effect that the position and quantity of the twist, which arises through both grinding processes, differ even with the same crowning (Figure 11).

Due to deformations of the gear-set pairings under load, the rotational axes of the intermeshing gears no longer run parallel, which increases the surface pressure. With profile crowning, lead crowning, and specific twist, an attempt is made to reduce the stresses in the component and to improve the running performance. Some of the gear manufacturer’s rising demands on twist are depicted in Figure 13.

In topological profile grinding, the shape of the profile cannot be changed dramatically. The change is in the fHa or slope of the profile. It can be affected with a three-, four-, or five-axis interpolation. The process is set up in such a way as to attempt to adjust the contact line between workpiece and the grinding wheel to the nominal gear flank by correcting the position of one of the machine axes (Figure 14).

If a minimum gap between grinding wheel and gear flank is reached, the next axis is enlisted for the adjustment. This procedure is repeated for each position of the grinding wheel along the tooth width. In this way, axis paths emerge for the involved axes. The operator can select the number of the axes involved in the processing. The specific target can also be  selected beyond just compensation.

With the help of a multi-axial interpolation during the grinding process, twist and crowning are also produced. Due to the correct alignment of the diagonal relation, the modification of the worm grinding wheel, and the grinding process, the required crowning and twist can be produced. With this method, the worm grinding wheel is given several sections which can be used for a systematic shift strategy (Figure 16).

The worm grinding wheel in Figure 16 has four sections. The maximum possible number of sections is proposed by the controls. The operator must then decide on a number. The first section is used for the rough grinding. The second serves for the finish grinding. If the tool life is reached, the processing is shifted by one section—the first section is no longer used. The second section is now used for roughing grinding and section three, which was not in operation yet, serves finish grinding. In this way, the process continues until the worm grinding tool is used to a maximum. The worm gear is subsequently dressed (Figure 15).

There is no difference between the time required for the dressing process for topological generating grinding, and for standard dressing. Nevertheless, the number of workpieces between the two different dressings is higher in the case of a worm grinding tool without twist compensation, as this can be utilized better.

Figure 17 and Figure 18 depict how tooth twist—or bias—is opposite when comparing profile grinding to generating grinding with a threaded grinding worm.

Modern gear grinding machines of the KAPP KX series (Figure 19) make it possible to solve diverse processing tasks, and to master various ranges of production batch sizes efficiently and economically. The technological flexibility of these machines contributes to that significantly.

Today it is essential that gear grinding machines have software which enables proper corrections, whether profile grinding or generating grinding. True flexibility means this technology can be applied, whether to automotive final drive gears, or to an aerospace application. Developing technologies into special applications such as these is vital to today’s machine manufacturer. It is also critically important that these applications can be controlled by the machine operator.

The user interface for topological profile and generating grinding using the KAPP KX machine is designed so that a simulation of the processing is carried out after entering the tool geometry and the modifications. This means that the controls calculate the axis paths necessary to dress the grinding tool, or to grind the workpiece. As a result of the simulation, the modifications, which can feasibly be achieved with the corresponding grinding process, are depicted graphically and evaluated. In this way, the operator is able to have the controls effect all calculations on the machine, and can judge the result.

In the processing simulation, the nominal and actual modifications, and the difference between the two, are portrayed three-dimensionally. With the help of a profile and lead cursor, any cuts in the direction of the tooth height and tooth width can be selected and evaluated for crowning and angle errors (Figure 21).

Alternately, the machine operator can also see the twist depicted two-dimensionally, as he/she may be accustomed to from using measuring machines. For this, three profiles and three leads are shown in the positions per flank, as originally entered (Figure 22).

After processing, the twist can be measured and judged in the machine. Any deviations from the nominal topography can be entered via a corrections page, so that the machine calculates a corresponding correction that can be taken into consideration for the next workpiece.

Two processing examples are shown in the following measurement records. In the first example (see Figure 23 and Figure 24) a crowning of 30µm was required on the left flank, and 15µm on the right flank. At the same time, a lead angle deviation of -30µm is required. A profile twist was not permissible.

The lead angle deviation was to amount to 5µm on the left flank and -20µm on the right flank. At the same time, there should be crowning of 12µm on both flanks.

The descriptive adjective “topological” may seem misapplied in the context of the prior two examples, for they appear to be relatively simple adjustments. But the method can be applied to modifications beyond just correcting for tooth twist. And so that word does apply. Some additional modifications are shown in Figure 27. 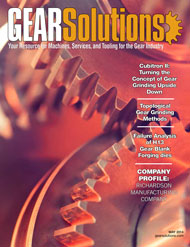