As demand for higher-quality precision gears continues to rise, so does the need for high-quality gear manufacturing machines that can get the job done and skilled machinists who can properly operate the equipment.

Gears — both large and small — have similar issues when it comes to manufacturing. Whether that means high volume and low mix or high mix and low volume, setup time and part quality remain constant. Over the past several years, great strides have been made with gear-manufacturing machines as the demand for more precision gears grow. Companies have relied strictly on the machines to achieve these tighter tolerances. However, in many situations, the workholding has not kept pace and has become a limiting factor in achieving higher-quality parts. Enter into the 21st century of workholding where setup and load time are reduced by 80 percent, increased cutting forces reduce cycle time by up to a factor of 10 due to reduced vibration as a result of higher clamping forces, setup repeatability increases to nearly 100 percent, and scrap is nearly eliminated. This solution is operator-friendly and maintenance-free. It is also currently being used by gear manufacturers in a wide range of industries, including the automotive and energy industries.

However, a solution such as this requires a complete mindset shift and the letting go of old methods and traditions in order to embrace a new philosophy.

As one contemplates the best way to fixture their gears based on configuration, objectives, and equipment, many questions arise. How much machine time is required? How much time is available? Are there enough qualified people to run the parts? How long will this job be running?

The most common method for holding a gear for tooth cutting is by using a solid mandrel. For small- to medium-sized gears, this has been a cost-effective way to manage gear workholding. A durable solid mandrel can be quickly and easily manufactured, mounted, and indicated on the spindle face. It has worked, and, for some, this method provides adequate accuracy to complete the job. Solid mandrel workholding will allow for a single workpiece or for several at one time. In most cases, the indication of each workpiece on the mandrel is required because a mandrel does not actively locate on a part, meaning the part is located and clamped onto the same face.

This process is time consuming, and it is dependent on an operator’s ability to indicate a part — a skillset that is dwindling.

Another option is a three- or four-jaw chuck. However, a chuck will increase the height of the workpiece in the work envelope causing interference with the tool path, and, in this case, only one part can be clamped at a time. The chuck jaw guides are also susceptible to contamination. Is the inside dimension of the gear large enough to clamp with a chuck? Will it hold enough to minimize vibration at the teeth?

Flange-mounted collet systems can be flexible in clamping a range of parts. However, the repeatability and the operator’s ability to properly set it up can be a challenge. Additionally, collet systems require more extensive cleaning and maintenance, and they are prone to wear. Figure 2

Another consideration that is becoming a growing concern is the availability of resources, especially for a qualified machinist. All too often a machine sits idle as a part is taken off the machine and the new part is loaded as well as when the part is clamped and dialed in. A true quick-change solution will allow a shop to load a clamped, located, and dialed-in part on and off a machine in a matter of minutes. The part would no longer need to be set up on the machine, tying up the spindle and the qualified machinist. Setup can now be handled offline by an operator or a lower-skilled setup person.

The SCHUNK VERO-S ® stainless steel system utilizes a simple mechanical locking method that is spring driven to hold the workholding device in place with up to 75 kN of force per module over 16,800 pounds of force.  By design, the system will locate and clamp the fixture within five microns in less than a minute. Figure 3

The SCHUNK VERO-S® quick-change pallet system is a fail-safe, spring-clamped, and air-release design. The concept is built around a tapered pin with a clamping flange that allows for easier loads and unloads while also generating up to five microns of repeatability. On medium to large parts, when combined with the patented flex cone, the system generates a run-out accuracy of less than five microns, whereas on smaller gears, a tighter tolerance clamping pin allows for even better repeatability of less than two microns. The large clamping flange in conjunction with the dual-angle clamping slide and the turbo function provides the maximum clamping force, up to 16,800 pounds force per clamping pin for the most rigid, vibration-free setup.

A quick-change pallet system is the best way to get the part and fixture on and off the machine quickly, but the question remains — what is the best way to hold the part? An expandable hydraulic arbor is a means to not only hold the gear, but to also accurately locate it with the highest of accuracy and repeatability.

The arguments against hydraulics have been their lack of flexibility and expansion range. Although hydraulic systems have superior accuracy, like many other systems in the past, the only option was flange mount and stirring in or indicating the arbor on an adapter plate mounted to the spindle. This results in significant spindle down time. To this day, it remains an unbeatable way to maintain the highest radial and axial run-out possible — that is if the person doing the setup is capable and quality-measuring devices are used. In today’s world of cost savings and shortened setup times, this process is becoming less acceptable.

A hydraulic arbor is a fully closed system with no external hydraulic power supply and no moving parts. It is the most compact workholding method, and it is capable of clamping multiple parts.  The outside dimension of a hydraulic arbor expands to clamp the inside dimension of a gear when hydraulic fluid is forced into the bladder of the arbor. The expansion rate of the arbor is governed when the piston is driven to a bottom-out position by a manually actuated screw. This ensures a consistent clamping force every time.  A quality arbor is designed so that there is no risk of permanently deforming the expansion area if actuated while there is no part on the arbor while maintaining the expansion within the elastic range of the material. Gears of varying diameters can be clamped using the same arbor when combined with a sleeve. The sleeve enables a single arbor to clamp a large range of parts, thereby reducing the number of arbors needed. Hydraulic arbors are durable and thru-hardened to 52-54 HRC.  They are available in sizes from 6 mm to 1,000 mm. Hydraulic arbors are an option to maintain the highest radial and axial run-out, provide concentric clamping and ensures roundness. Additionally, vibration is nearly eliminated due to the large uniform clamping surface. Figure 4

However, the hydraulic arbor by itself needs to be dialed in every time it is set up on a machine.  With the limited availability of qualified machinist, this can take significant time for the average setup person. When an arbor is combined with a quick-change pallet system, the arbor is dialed in once, and the Schunk quick-change system with patented flex cone technology assures the repeatability of the setup and run-out.

However, this technology has some qualifications. The inside dimension of the gear must be accurate within 0.3 percent. This limited range allows for the part clearance, arbor expansion, and grip force. Therefore the gear can enter the fixture with a standard that is common in today’s gear assemblies.

A traditional method for holding gears for the gear process has been applied to the use of conventional chucks, solid mandrels, collets, and special fixtures. These methods will require a level of indicating every part and truing up. The chuck method is greatly limited by the accuracy of turning and truing the part. Through the use of new arbor technology, the gear is not just clamped, but it is also centered uniformly on the qualified inside dimension of the gear. Figure 5

Each of these technologies has unique applications in their own right, yet when the latest machine technologies are combined with the latest developments in workholding and tooling, significant solutions to old problems are achieved. In addition to the knowledge of the latest workholding and tooling technologies, experience working with the heavy cutting force of gear manufacturing and repetitive actuation of an arbor is important for the most rigid, longest-lasting solution. For example, a high-performance car running on cheap gas will not perform as well as on high- quality gas. In the same way, neither will the latest high-performance machine perform as well with old technology workholding, cutting tools, and processes. Each of these components is an improvement, but individually none are working at their optimum efficiency without the other.

The workholding solution alone will only take the user so far. The integration of the solution into the machine and the latest part processing is necessary. Due to the shrinking qualified machinist labor pool, manufacturing in the United States will be forced to transition into processes that allow for the most skilled machinist to oversee processes that require the least amount of skill so that their needed skills can be distributed broadly throughout the facility and so that high-performance machines will be operating at over 80 percent up-time.

In the 21st century, machining amounts to more than just a new machine; it’s a new mindset.  With these changes, gear manufacturers are experiencing setup and load-time reductions of up to 80 percent as well as increased cutting forces from vibration dampening that reduce cycle time by a factor of 10 and nearly eliminate scrap. Most importantly, it allows for the best use of the most precious commodity of all — a skilled machinist. These changes will result in best manufacturing practices and improvements down to the bottom line. 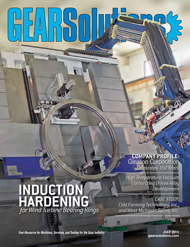