Worm designs and manufacturing methods have changed very little over the past half century. Finishing a worm in soft material and then hardening it offers huge savings to worm manufacturers, but has not been considered viable because of distortions in the material from heat treating. Thread grinding has long been used as a finishing operation to removing a mere 0.01-0.02 µm to achieve the necessary worm tolerances for lead, pitch diameter, and run-out, etc. Grinding, which comes at a big cost, is no longer required.

Progress, however, has been made. To compete with imports, mostly from Asia, U.S. manufacturers are reevaluating their products. Gear worms can be produced much better and more economically using nontraditional methods. Focusing on speed reducers–specifically right-angle worm reducers–many well-know suppliers have raised the bar on performance and pricing. And they have done so through whirling, induction heating, and new design approaches. (Figure 1)

The little-known process of whirling is showing impressive returns in producing worms for gear worm reducers. Methods such as hobbing or thread milling are actively being replaced by this relatively new cutting process. Improvements in many areas of manufacturing, including cutting tool materials and geometry, the machine tools themselves, and induction hardening procedures, have all allowed manufacturers to reduce the number of process steps by 60 percent or more. By machining the worm to finished tolerances and surface roughness using the whirling process and then induction hardening, the worms are not only produced faster, less expensively, and with less handling, but to greater tolerances than ever before. This method completely eliminates the need for thread grinding. Cylindrical grinding of the bearing journals can also be eliminated by turning the soft blanks to finished tolerances and surface roughness prior to whirling the worm section. The journals can remain soft, and thus do not require subsequent finishing operations. The induction heating process of hardening and then quenching only the worm section does not distort or add stress to the material. The worm shaft does not require straightening, which eliminates yet another normally manual operation.

The latest advancements in tooling design, cutting materials, and machine tools have made the benefits of thread whirling even greater than before. Difficult threading operations, such as very long shafts or very wide profiles, can easily be machined by whirling. The superior surface finishes and closer tolerances of screws machined by whirling are ideal for today’s very strict SPC requirements. CNC control has added to machine threads the possibility of variable or unusual pitches, tapered or variable-root diameters, and multiple starts. Production rates of whirling, when compared to thread milling or hobbing, are at least four times faster. The recent introduction of insert tooling systems has greatly reduced the changeover, or set-up times. Tooling costs are also greatly reduced. Since most materials are whirled dry, without coolants, the problem of proper coolant disposal or recycling is reduced. (Figure 2)

Leistritz, a machine tool builder based in N¸rnberg, Germany, with a branch office in Allendale, New Jersey, has developed a complete line of multi-axis CNC whirling machines. These machines have been designed specifically for whirling and have the inherent rigidity for cutting deep, wide profiles in tough materials and the necessary accuracy for cutting precision, close-tolerance screws. These machines are ideally suited for production environments where there is minimal time to do routine maintenance. The slant bed design, of cast iron construction, utilizes zero-maintenance AC servos for all axes. The main spindle is actually an ultra-precision rotary “C” axis having high torque and a resolution of 0.001 degrees.

Whirling is a machining operation in which a series of profiled cutters remove material by passing over the workpiece moving at cutting speeds of 350-650SFM and advancing at “lead” to produce a helical form. Whirling removes material similarly to milling; in whirling, however, the carbide cutters are arranged along the inside of a ring to a predetermined cutting circle diameter calculated from the worm data (outer diameter, pitch, lead, etc.). The whirling head is tilted to the nominal helix angle of the worm. Material removal is the result of the whirling ring rotating at high speed around a slowly rotating workpiece. The rotating workpiece, combined with the advancement of the longitudinal slide, produces the required pitch of the worm. The eccentric amount of the worm centerline to the whirling ring determines the over-pin dimension. The tangential cutting action of the whirling process leaves the tool in contact with the workpiece for a much longer time along the arc of the “cutting circle” of the inserts. Subsequently, each pass of the insert removes four to six times the amount of material. In addition the tangential cutting action also permits much higher cutting speeds, thus shortening cycle times again. The low approach angle of the insert when it first makes contact with the workpiece ensures that the whirling tools achieve a good tool life. (Figure 3)

The above characteristics combine to give yet another benefit: dry machining. In most cases the whirling process is done dry, without coolants or cutting oils. Nearly all of the heat generated by the cutting action is carried away by the blue-colored, comma-shaped chips.

Manufacturers take the full benefit of the positive aspects of whirling by induction hardening, normally in a lean manufacturing cell. When an alternating current flows through a coil, eddy currents are induced in metallic objects placed inside the coil. Heat is developed where these eddy currents flow. The higher the frequency, the more the heat becomes concentrated at the surface. The latest sensors and computer controls provide the ability to regulate the electrical frequency. Induction heating can be programmed to harden only certain areas of a worm shaft. For example, the bearing journals can remain soft and only the worm section hardened.

The induction hardening process is very repeatable and achieves a high hardness quality with consistent results. Modern induction equipment requires very little set-up time and normally produces a hardness in tolerance from the very first workpiece in a lot. Computer files store the control and position parameters to be recalled for each worm part number.

In many cases, the best way to harden a worm shaft is to scan the worm section. In this process, the induction coil–a ring-shaped copper element–has a length much shorter than the worm-face width. To heat the entire worm, the coil must advance in the axial direction over the worm length. This is typically performed vertically from the bottom of the worm, moving in the “up” direction. Just below the induction coil is an annular quenching ring to douse the worm in solution to evenly cool the material. A variety of quenching fluids can be used and must be determined by the material and desired hardness/depth. The scanning rate controls the heating temperature and quench and controls the resulting hardness along with frequency of the electrical current. Often, the worm is heated a second time to temper the hardness back to give a more-even hardness from outer diameter to worm root. 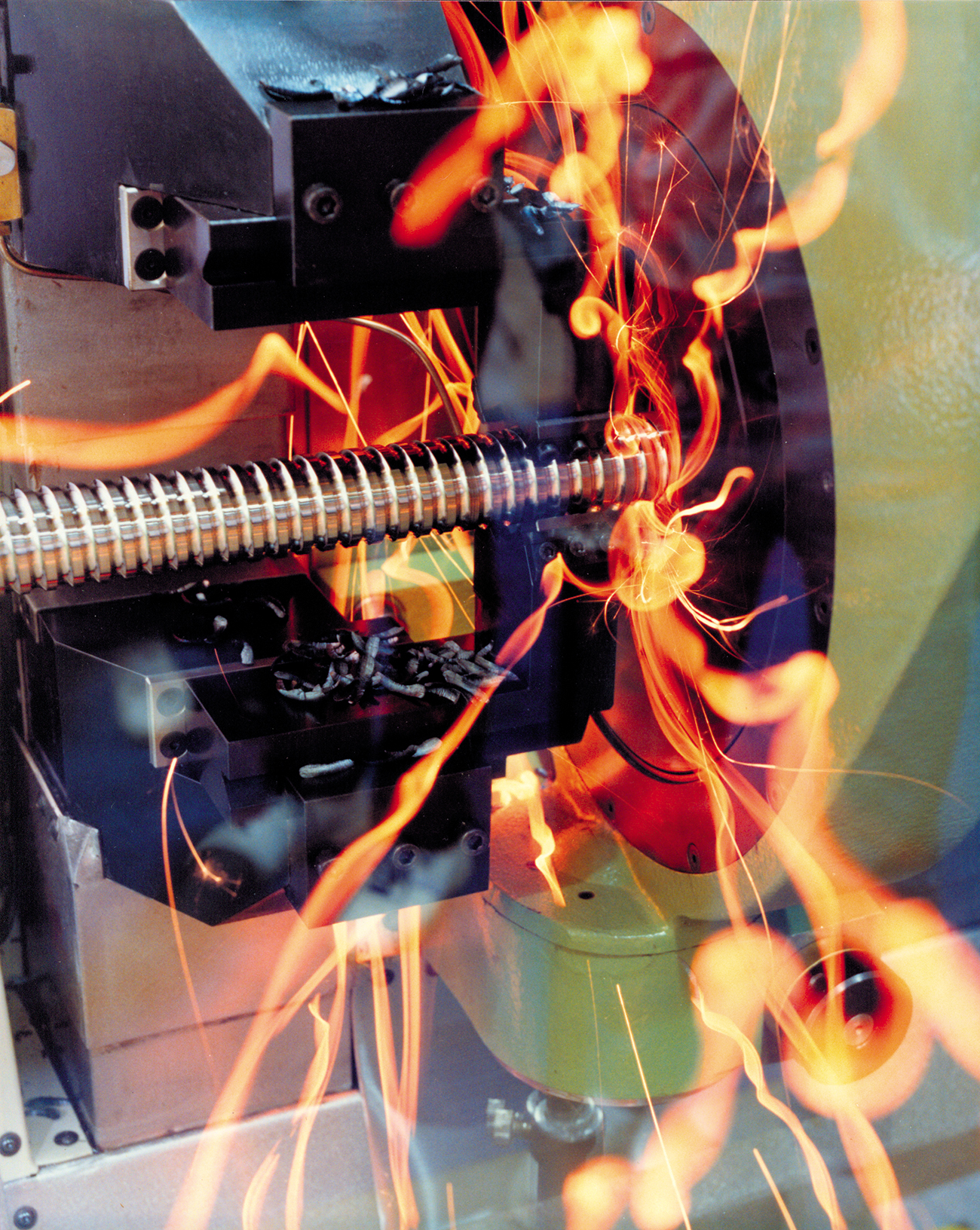 To take full advantage of the benefits described above, some changes in worm design will be necessary. These changes could be limited to the steel used, but should also include a shortening of the worm length to raise the load ratings of the gear-box assembly.

The induction process only requires a ferrous material to create heat in the work. To harden steel, however, an alloy with relatively higher carbon amounts is required. Common steels used in this processing for producing gear worms are 4150 or 1050. The latter is less expensive but has a lower machinability. Typically, alloys having carbon levels of 0.4 to 0.6 percent carbon offer excellent induction hardening characteristics for both depth and pattern. Depending on the hardness level or tolerances, a variety of steels are available that offer good induction hardening ability. The machinability of the steel is very important in this processing, because the worm is being finished with a cutting process, so surface roughness is critical. Since worms typically run with brass or bronze gears, wear is also critical. The smoother the surface, the better the life of the gear. Although 16rms (0.4Ra) is possible, and not unheard of, 20 to 24rms is more typical and controllable.

Worm designs which people are most familiar with include an undercut or relief at each end of the worm section. This has been the standard, and it was probably incorporated to suit much older gear-hobbing machines. The undercuts acted as clearance areas to start and finish the worm. The width of the undercut was determined by the arc of the hob radius. Since whirling does not require undercuts at the ends of the worm area, the worm face width can be optimized and the overall shaft length reduced. This makes a more rigid, compact, and stronger design. The bearing journals can be much closer together, and the overall housing smaller and lighter. Not having undercuts also eliminates the need for deburring the worm-teeth ends at each undercut. This also saves time when turning the worm blanks. A simple straight diameter of the worm O.D. is perfect. In designs that absolutely require the undercuts, possibly for assembly purposes, the whirling operation can include a higby cycle to remove the sharp edges where the worm teeth break into the undercuts.

Modern design, machining, and heat treating amount to huge savings for worm-gearing manufacturers. Anyone presently making worms should evaluate new technologies. The investment that may include a redesign due to material changes and capital equipment will reap benefits very quickly. Even in applications with low to medium production volumes, this new processing can offer huge savings and quality improvements. The end result will be a speed reducer drive with higher efficiencies, greater power ratings, and lower weight, as well as lower costs and shorter lead times. 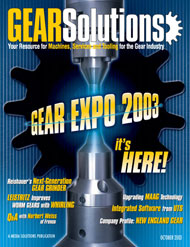