This series is intended to provide design engineers working on right angle geared applications with the knowledge necessary to further their work in-house with minimal input from inside or outside gear specialists.

This series is intended to provide design engineers working on right angle geared applications with the knowledge necessary to further their work in-house with minimal input from inside or outside gear specialists.

This is the first of a three-part series of instructions to assist engineering designers and detailers with the process of correctly laying out bevel and hypoid gear teeth. Each guide assumes that the basic gear tooth design information is already at hand (for straight bevels this would include shaft angle, pinion and gear pitch diameters, outer cone distance, face widths, pinion and gear pitch angles, face angles and root angles, and the pinion and gear outer addendums and dedendums). This basic information is usually available in the form of a gear “dimension sheet,” which may have been calculated by your own gear engineer. Nissei, as a gear design and manufacturing company, provides gear dimension sheet information to our customers as part of our service. Publications on the subject are also readily available from the American Gear Manufacturers Association (AGMA) or from The Gleason Works.

To create a dimension sheet certain information is usually required. This information for straight bevels includes the applied loads, speed, shaft angle, gear materials, heat treatment, lubrication method, operating temperature, required life, and operating conditions affecting the driving and driven loads. For straight bevels an initial size with pitch, face width, and tooth pressure angle is chosen and the bending stresses and contact stresses for the resulting design are calculated. The resulting estimated life is compared to the requirement. This can be an iterative procedure involving several sizing trials before a dimension sheet is finalized.

Taking the data listed on a gear dimension sheet and converting it into a drawing is the key next step. It is the connecting step between the gear tooth design and the creation of the rest of the mechanical structure–the gear blank, its bearing arrangement and, ultimately, the housing itself. It is the critical step leading to correctly produced gear-part drawings.

Step one in drawing a bevel gear set is to lay out the pinion and gear axes at the desired shaft angle. The vast majority of bevel and hypoid gears are designed for a shaft angle of 90 degrees, which we will use for our examples. The intersection point of the axes is the “pitch apex.”

Next, locate the pitch point along the pitch line at the dimension given for the outer cone distance. This point simultaneously identifies the pitch diameter for the pinion and for the gear.

From the pinion outer addendum and at the given pinion face angle, draw a line connecting the normal at the heel to the normal at the toe. You now have the pinion face surface for the blank. Likewise draw a line, at the gear face angle, from the gear outer addendum connecting the heel and toe normals to establish the gear face surface. In the same way, draw lines, at the pinion and gear root angles, from the pinion and gear outer dedendum points, connecting the normals to create the pinion and gear tooth root lines. Notice that the teeth taper in depth from the heel to the toe. These root lines, when extended, should cross the axes at the pitch apex, forming a depthwise taper known as “standard depthwise tooth taper.” The root apex and pitch apex for standard taper designs, then, are coincident. Standard taper is used for all Gleason-type straight bevel gear designs (with the exception of the special case of Revacycle differential gears). The construction should also demonstrate another characteristic of bevel and hypoid gears in general: parallel clearance. The root line of one part should lie parallel to the face line of the mating part.

With the standard theoretical form of the teeth now correctly identified, it is possible to start detailing the rest of the pinion and gear blank. Note that the traditional (non-FEM) gear rating calculations are generally always based on this theoretical form.

It is not uncommon to see blanks with design changes that lengthen the root face width compared to the theoretical form. There are manufacturing limitations with straight bevels to watch out for. The root-land slot width taper can become excessive if the face width exceeds 25 percent of the outer cone distance. “Excessive slot width taper” occurs when the outer slot width is more than twice the inner slot width. Consequently the overlapping top and bottom cutter blades, which individually must be smaller than the smallest slot width to prevent mutilating the tooth flanks, can leave a “fin” of uncut material in the root. The cutting tool life can also suffer due to the uncut material rubbing on the back edge of the blades.

There is another caution when making blank form changes, one that is related to the practice of drawing the pinion and gear independently. When introducing changes to the standard theoretical form, the pinion and gear teeth should be drawn together to judge the effect on the mutual tooth contact position. In the following example, the blanks are trimmed and the mating of the teeth results in a contact pattern placement dilemma. The pattern is in the middle of the pinion face width, but on the toe end of the gear face width. The contact placement issue for this gear set was not discovered until the parts were manufactured and run together in the test machine.

The potential for the occurrence of this mismatch is not readily apparent if the gear and pinion are drawn separately. The mismatch results in poor positioning of the load on one member. Usually the localized tooth contact is placed “central toe” on both pinion and gear. If the localized tooth contact was placed central toe on this example pinion member, the contact would run off the ends of the gear member teeth. This is generally undesirable for reasons of noise, vibration, and load concentration.

We hope this article has been helpful for the design of your bevel gear sets. Hopefully you can now move forward with the rest of your application design and communicate your needs more effectively with your gear suppliers. Part II of the series, on spiral and Zerol® bevel gears, will appear in next month’s issue of Gear Solutions magazine. 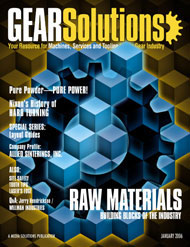 Proper balance is one of the critical keys in designing and...