Shorter lead times, and savings of 50 to 60 percent, make purchasing reconditioned and remanufactured equipment an attractive alternative to buying new.

A company was bidding on a project and soon realized it couldn’t win if it had to buy new equipment due to the expense, so it took an in-depth look at rebuilt machines—what they would cost, whether they were dependable, what the lead times were—and decided to incorporate those figures into its quote. It won the job, and it’s bought a total of three machines from the same company since that time, with plans to purchase more in the future (see sidebar).

Having heard similar stories working on past issues of the magazine, I decided to learn more about the rebuilding process. What I wanted to do was actually see what condition the machines arrived in, learn about what happened to them from that point forward, and to then see an example of the finished product on the shipping dock. I also wanted to hear about how much money can be saved by going with a used or remanufactured machine, and what the inherent risks might be. In short, I wanted answers to the questions that I thought would occur to anyone considering purchasing reconditioned equipment. So I hopped a flight to Charlotte, North Carolina, and paid a visit to R.P. Machine Enterprises, Inc., in nearby Statesville.

There were many reasons why I decided to make this company the focus of my study. First of all, R.P. Machine has grown exponentially since we made it the subject of our company profile about three years ago. It has purchased and moved into a new facility, while retaining its original building about six miles up the road, and now boasts a total of 160,000 square feet under roof. A result of the move and expanded space—as well as the company’s recent acquisition of Hoglund Technology and Gould & Eberhardt, which now makes it an OEM in addition to its reconditioned and remanufactured equipment sectors—is that the company is currently streamlining its various production lines in order to enhance efficiency. So I thought it would be interesting to witness the development of these new systems even as they’re being put into place.

On my arrival I was ushered through the spacious lobby, past the sales department, and into Rich Piselli’s office. As president and founder, he still refers to himself as a sales representative on the company’s Web site, and the reason for that soon became clear. His office truly is the center of activity, and our conversation was punctuated by salespeople darting in with questions, to report on a new development, or to introduce a visiting client. Whenever he wasn’t actually on the phone, it was usually ringing—and he always took the call.

Before long, however, he asked if I was up for a tour, and we made our way to the production floor. My first impression was of cleanliness and order; there were so many machines that it made me dizzy, but they were all in a specific place, and at a particular point in whatever process they were undergoing. To one side there was a hobber being rebuilt, with its new parts carefully laid out on a table, and on the other a long row of Gleasons awaiting final assignment. In addition there were Reishauer, Liebherr, Maag, Pfauter, Fellows, and National Broach machines marching off toward the back wall where I could see the windows of the engineering department, as well as the entrance to the vast chamber where the first step in the reconditioning process takes place.

My second impression was of activity. Employees were constantly approaching Piselli with clipboards asking him to sign off on their work, and he would then enter into a lengthy conversation with a customer visiting to witness the parts runoff on a machine they’d purchased. And everywhere there were men grinding, or polishing, or painting, or rewiring, so that you never knew what you’d discover on rounding the next corner.

Once he’d finished answering his client’s questions, Piselli walked to the center aisle of the main floor and pointed to different parts of the building. “That’s where the machines are uncrated once they’ve been unloaded from the truck, and that’s where the runoffs are conducted,” he said. “Over there is where the major retrofitting takes place—installing CNC controls and things like that—and here’s where the finished machines are loaded on pallets and shrink-wrapped prior to shipping.”

At the center of it all, looking much like the control tower at an airport, stood the newly installed Test & Measurement Lab, featuring an M&M 3515 and a Klingelnberg PFSU1600, where customers can see the official results of the runoff they’ve just observed. A portion of an adjoining 50,000 square-foot room will be devoted to parts inventory, with the majority of the space being upfitted for the production of new G&E machines, including the installation of two huge overhead cranes.

“So this is where a lot of what we do happens,” Piselli said, “and our customers are welcome to visit us anytime. All they have to do is give us a call and they can come see it all for themselves. It’s just that simple.” A

Those visits are actually a tool in the belt of Bill Gilpatrick, sales manager, and they happen quite frequently. “If we can get people in here to see the place, the sale is basically made,” he says. “Once potential customers have seen for themselves how much pride we take in every single aspect of what we do, they quickly realize that they’re in good hands.”

Two of those hands belong to Bill Ramsay, who oversees the company’s CNC retrofit/rebuild program, and two more are those of Tom Gassner, who recently joined R.P. Machine as its resident Gleason expert and reconditioned machinery supervisor. Carl Hoglund is also onboard, and doing what he loves most. “Engineering,” he said with a laugh. “Let me sit here and create new machine designs and I’m happy.”

Hoglund’s latest design involves a compact CNC form dresser, the NB-7001, which will not require peripheral electronic devices. “It uses what’s known as a ‘smart motor,’ with a tiny computer mounted in the housing so that you can just plug it up and go to work,” he says. The company has also developed its own four-axis high speed hobber, the SH 150/750, and plans to begin production of new G&E machines within the next six months to a year.

“Once we begin building these machines we’ll be the only manufacturer of large hobber/gashers in the United States,” Gilpatrick said. “It’s a huge investment, but well worth it, because there are no more of these two- to six-meter machines being produced in this country, but there’s definitely a need. So we plan to fill that need.”

Piselli adds that there are both vertical and horizontal models in the planning stages, and that the company will also be recutting and manufacturing worms and worm wheels for the G&E rebuilds directly from the mother machines, which came with the acquisition, along with all of the original equipment forms. “We’ll be able to service older machines, while at the same time building new ones to introduce into the marketplace,” he says.

Still, it was the “before and after” transformation that I’d come to see, so we took a drive to R.P.’s original facility where a number of machines were being stripped and disassembled. One hulking giant that immediately caught my eye was a National Broach “Red Ring” gear shaver that had obviously put in many years on the production line.

Whether the machine will be sold as a reconditioned unit—cleaned up, painted, put back in running order—or completely retrofitted, the first step involves stripping away the old to make way for the new. A crew of six men swarmed over one machine, sanding and chipping at its rusted surface until unpainted metal shone through. The machines are basically reduced to their component parts—if that’s what the order requires, Piselli pointed out.

While the reconditioned machines looked great, with a fresh coat of paint and everything in its proper place, it’s the retooled/retrofitted equipment that’s really impressive to see.

Once they’ve been cleaned up, Bill Ramsay tackles the process of installing the necessary Fanuc controls; R.P. Machine was the one of the first gear machine retrofitters to have a GE Fanuc Five Star Rating, in fact, which certifies the technical expertise of those handling the project. Once that phase has been completed it’s time to put the machine through its paces to make sure that it meets with the company’s final qualification protocols. Then, after the machine has passed inspection—with different checklists having been developed to reflect each customer’s individual needs—it’s time for the runoff of parts, which will then be tested in the nearby lab. On the shipping dock, the equipment looks new, and it would be hard to imagine any machine going through more testing than these do prior to delivery.

“Everything we do is transparent, and our customers are always invited to watch the runoff take place and to see the results on our measurement machines,” Piselli says. “We’ll do whatever we’ve got to in order to earn their confidence, and that starts with the first phone call and extends far beyond the point of sale. We stand behind what we sell, and that’s a promise.”

With the tour behind me, I was ready to ask some of the questions I’d formulated. Although every type of machine carries a different price, I wanted to know how much, on average, a company could save by choosing reconditioned or retrofitted machines over new. “You’re going to save anywhere from 50 to 60 percent on a remanufactured machine, and 80 or even 90 percent on used, rebuilt equipment,” Piselli responded.

How about lead times? “That’s another one of our really strong points, because we can generally have a machine ready in 90 to 120 days, depending on how much work the customer needs done, as opposed to lead times of a year or more from some of the other OEMs,” he said. “Plus, we’ll loan you a machine if you need to get started immediately, or if you’re sending us one of your machines to retrofit and retool.”

What if something goes wrong once it’s been delivered? “We offer a one-year warranty through Hartford Steam Boiler, so if there’s a breakdown or if certain adjustments need to be made, we’ll take care of it. We’ve got some great technicians on staff, so we can handle anything that might come up.”

With more than 300 machines in stock at any given time, Piselli said that he has what customers need “80 to 90 percent of the time. And if we don’t have it, we’ll find it.” 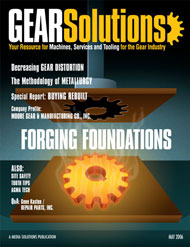