You’re sure to benefit from reading this fascinating study presented by a gearbox specialist with Tata Steel on calculating—and better understanding—worm/wheel contact.

The contact on single enveloping worm gear drives is the line contact. The changing form of the worm across the face of the gear makes it impossible to derive a simple mathematical expression for the contact curvature. In addition, the combination of the lead angle of the worm and position of the pitch plane of the worm in reference to the worm thread profile has predominant influence on the position and form of the actual contact line. The author here presents a report on the relative curvature of the worm and wheel at sections parallel to the axial section of a worm.

A curve is the locus of a point whose position vector r relative to a fixed origin may be expressed as a function of a single variable parameter. It is usually convenient to choose as the scalar parameter the length s of the arc of the curve measured from a fixed point A. Let P, Q be the points on the curve whose position vectors are r, r + δr corresponding to values s, s + δs of the parameter then δr is the vector PQ. The quotient ( δr / δs ) is a vector in the same direction as δr and in the limit, as δs tends to zero, this direction becomes that of the tangent at P. Moreover, the ratio of the lengths of chord PQ and the arc PQ tends to unify as Q moves up to coincide with P. Therefore, the limiting value of (δr / δs) is a unit vector parallel to tangent to the curve at P and in the positive direction (see Figure 1). If it is designated by t, then:

The curvature of the curve at any point is the arc rate of rotation of the tangent. Thus, if δθ is the angle between tangents at P & Q, δθ / δs is the average curvature of the arc PQ, and its limiting value as δs tends to zero is the curvature at the point P. This is sometimes called the first curvature of circular curvature. We shall denote it by κ.

A negative sign will be attached with the radius (ρ1 or ρ2 ) which is concave.

For general industrial purposes, helicoid sections for worm and wheel are mostly involute helicoids and screw helicoids. Both of these helicoids can be generated with a straight line generatrix, therefore their tooth geometry is simpler. Involute helicoids may be generated either by hobbing or by lathe (see Figure 2). When it is generated by lathe, half of the cutter included angle must be equal to the lead angle of base helix. From the properties of the involute helicoids, it is known that the teeth flank will have some curvature in its transverse section and the radius of curvature at pitch point will be given by:
ρ = Rp Sin αs (1)

A normal section of the curvature will have a radius of curvature:

By putting the value of ρn from equation (2) in the equation (3) and simplifying it, the following equation is obtained:

Curvature Radius at a Section Parallel to Axial Section

The radius of curvature of the worm tooth flank at a point P is to be determined [2]. We follow Cartesian coordinate system, in which the central point of the transverse section of the worm is the origin (see Figure 3).
The worm axis represents Z axis, and the X & Y axis are as shown in the transverse section of worm. The coordinate of any point P on the helicoids (flank) will be the function of x, y & z. But for any section parallel to axial section, the value of y will be constant. Therefore, for a particular point P, z is the function of x only. From the definition of the pressure angle at any section it is known that:

The point P in xx section may be indicated either by Cartesian coordinate system x, y, and z or by the polar coordinate β, r, z, so it is given that:

The equation to the helicoids plane is:

Relative Curvature of the Worm and Wheel Teeth Profile

To calculate the relative curvature of an involute helicoid worm at a section which is parallel to axial section, the point of contact is assumed to make an angle approximately 20 degree with vertical plane. The worm have following gear parameters:

To calculate the relative curvature of a screw helicoids worm at a section which is parallel to axial section. The point of contact is assumed to make an angle 20 degree with vertical plane. The worm of wheel have the same gear parameters as in example 1 except instead of normal pressure angle, axial pressure angle

Solution: The contact position remains almost same for all types of worm and wheel which has got straight line generatrix (see note * at end). Therefore, here also it may be taken as:

For the gear pair of example 1 calculate the relative curvature at a section parallel to vertical plane making an angle approximately equal to 30 degrees.

Solution: The exact point of contact in this case will be at β = -28.155 degree, r = 28.35. The negative sign attached with indicates angle is at opposite side of assumed direction. So it can be dropped.

For the gear pair of example 2 calculate relative curvature at a section parallel to vertical plane, making an angle of 30 degrees.

For the gear pair of example 1 calculate relative curvature exactly at axial section.

It is noticed that the amount of relative curvature at a particular section is more in involute helicoids than the screw helicoid. In terms of only Hertzian contact stress (ignoring other factors like effect of contact ratio), involue helicoids should have better strength. 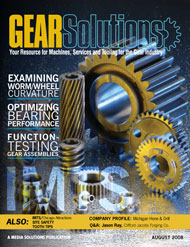