Even a small focus on improving lubricant condition can have a dramatic impact on the life of gears.

No matter what industry you serve, there’s a good chance that gears and gearing are critical to your process. In fact, gears are so commonplace that we tend to take them for granted. But have you ever stopped to think what keeps gears running reliably? The answer is simple: lubrication. For any gear, whether we’re talking about open gearing or a gear reducer, the role that the lubricant plays is vital to the life expectancy.

In the preceding paragraph, notice the use of two similar words: lubrication and lubricant. Oftentimes, these words are used interchangeably, but in reality they have very different meanings. The word lubricant is easy to define; it’s the product—oil or grease—used to reduce friction between the moving surfaces within the gears. Without the correct lubricant, gears would simply stop turning. Lubricants for gearing can be either oil or grease depending on application, mineral or synthetic and often contain friction modifiers, antiwear additives, or extreme pressure additives to help mitigate the impact of metal-to-metal contact. Which lubricant to use is dependent on the load, speed, the slide to roll ratio and metallurgy (steel, brass, bronze etc.), as well as other factors unique to each application. The selection of the correct lubricant for gearing is beyond the scope of this article, but suffice it to say, without the correct lubricant, gears won’t last very long!

Lubrication, on the other hand, is the process by which a lubricant is applied and its condition maintained while in service. Things that affect proper lubrication include oil level, application rate, and application point. But perhaps one of the biggest influences to successful lubrication is lubricant cleanliness.

The Impact of Lubricant Cleanliness on Gears

The presence of contaminants in gear lubricants can have a profound effect on reliability. For the purpose of this article, we’ll focus on the two most common contaminants—particles and moisture—though depending on operating environment, other contaminants such as process chemicals, air or even other lubricants can cause problems. For open gearing, contamination control can be a very significant problem. By its very nature, open gearing is almost impossible to isolate from contaminants. However, at a minimum, gross contamination should be prevented through the use of passive shielding—plates, guards or covers to try to prevent gross levels of particulate and moisture for entering the lubricant and lubrication zone.
For enclosed gears, contamination control is relatively straightforward, with a few basic provisions. In enclosed gear drives, contamination can enter the oil sump in one of three ways:

But before we can introduce solutions for controlling contaminants, it’s important to understand what level of contamination exclusion we should be aiming for.

How Much is Too Much?

Water in gear oil can cause a number of negative effects including loss of film strength, rust and corrosion, and premature lubricant degradation. Because of this, water levels should be kept below the oils saturation point at all operating temperatures, meaning any water present is dissolved in the oil rather than free or emulsified. In practical terms, this means keeping water levels below 200-500 ppm (0.02-0.05% v/v), depending on the type of fluid and operating temperatures. For stop-start applications, targets should be set even lower since an oils saturation point is temperature dependent, meaning water will have a tendency to come out of solution when the gearbox shuts down and the oil cools.

Particle contamination is typically measured in lubricating oils according to the ISO: 4406:99 standard. For those unfamiliar with this rating, there are a number of good articles available online that explains the concept. Using this standard, the optimum particle cleanliness target for gears will vary based on criticality, gear type (particularly slide vs. roll ratio), speed, power density, and reliability objectives. However, for critical applications, targets should be set in the ISO 19/17/14 (c) to 16/14/11 (c) range. This is becoming increasingly important as the physical size of gearing reduces meaning power density continue to increase. The use and abuse that we could tolerate with large industrial gears from the 1950’s just doesn’t cut it with today’s equipment design!

To meet these targets for particles and moisture, we’re going to need to address all three sources of contaminant ingression: seals, fill/breather ports and introduced contaminants.

Particularly in process industries where airborne contamination is unavoidable, shaft seals become a major source for contaminant ingression. Many enclosed gears are equipped with little more than lip seals to seal out contaminants, which often have the effect of concentrating particles and moisture at the shaft/seal interface resulting shaft scoring, seal leakage, and ultimately increased contamination. While a detailed discussion of sealing technologies is beyond the scope of this article, simple strategies such as installing back-to-back lip seals, purgeable seals, labyrinth seals, and magnetic face seals have all proven effective at preventing contamination ingress through shaft seals, provided the additional cost can be justified.

Many gearbox designs use a combination breather/fill port (Figure 2). But whether combined or separate, the fill port and breather port are a significant source of contamination. The design of the gearbox fill and breather ports really hasn’t changed in decades. Usually comprised of a cast metal casing, the media used to exclude contaminants is often little more than wire wool or some other course media. This type of media does nothing to prevent water—both liquid and vapor—from migrating into the oil sump and is simply not able to eliminate the ten micron and smaller particles that cause the majority of contamination induced failures in oil lubrication assets.

A much better option is to use a desiccant breather. Desiccant breathers contain two types of contamination control media: silica gel to remove moisture and a particle removing membrane capable of eliminating particles down to 1 micron. There are three basic designs of desiccant breather: free breathing, vented, and expansion chamber. While all three are effective, misapplication is one of the main reasons why these devices fail to do their job.

Original designs of desiccant breathers used a free breathing concept (Figure 2), which is conceptually very simple. As the air within the gearbox expands with increasing temperature, air passes through a central standpipe, through the particle media and silica gel bed, and is exhausted to atmosphere. Conversely, when temperatures decrease and the gearbox needs to breathe air, the ingressed air passes through a 3 micron absolute particle media, through a silica gel bed, and through a second particle media insuring that both particles and moisture cannot enter the gearbox through the breather/fill port.

To solve this problem, vented breathers have been developed. These breathers include two sets of opposed vent valves. The valves have a very low cracking pressure set at 0.23 psid. Under steady state conditions (i.e. the system is not breathing in or out) the valves are closed. However, if the gearbox cools down and needs to breathe in, two of the valves open to allow air to enter, passing through the same 3-micron particle media and silica gel bed found in free breathing breathers. Conversely, if the gearbox heats up and needs to exhale, the opposing set of valves open to relieve pressure within the headspace. Ideal for use in high humidity environments with minimal volumetric cycling due to temperatures changes within the gearbox, vented breathers can last 10-20 times as long at free breathing breather depending on application.

In some instances where small volumetric exchanges occur frequently, a better option is to use an expansion chamber style breather. Similar in design to a vented breather, a hybrid expansion chamber breather has similar check valves to the vented design, but with the addition of a diaphragm that expands and contracts to equalize pressures with small variations in temperature. The advantage of having the diaphragm and silica gel versus just a simple diaphragm is the ability of the silica gel to adsorb moisture from headspace. Without the silica gel, a diaphragm would have the reverse effect, sealing in water vapor within the gearbox.

While vented and hybrid breathers last longer than free-breathing breathers, the vent valve introduces a significant amount of air flow restriction, reducing air flow rates by as much as 4-8 times. As a result, these cannot be used on larger gearboxes or where higher air flow rates are required. However, new developments in breather technology have seen the introduction of a new type of breather which includes the benefits vent-valve technology but with much improved air flow rates. These breathers which also include the ability to coalesce oil mist within the standpipe permit extended life desiccant breathers to be used on almost any gearbox or other large application.

The last source of contamination comes from contaminants introduce during routine maintenance tasks such as level checks, oil changes and top-offs. As much as possible gearboxes should remain sealed and be equipped quick-connects, external oil level gauges and permanently mounted oil sample valves. A number of devices are available that allow for any gearbox to be quickly and easily modified to facilitate almost complete isolation of the oil sump from the ambient environment during normal and routine operations and maintenance.

With as many as 50-70% of all failure related to lubricant contamination, it’s little wonder that with just a small focus on improving the condition of the lubricant can have a dramatic impact on the life of gears. Simple, inexpensive changes such as using desiccant breathers and minor gearbox modifications can have a profound impact on reliability and lifecycle cost. 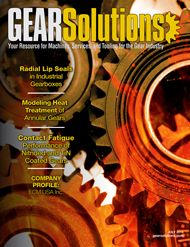