There are many different processes performed in the “powder metal” arena. They range from conventional compacting with sponge iron (low-density, high green strength) for self-lubricating bearing manufacture all the way through powder forging (fully-densified), which is used for such applications as manufacturing automotive connecting rods. Capstan Atlantic uses the most common and versatile process, which is conventional compacting with atomized powder for medium to higher density (6.7-7.6g/cc) applications.

To date, the most commonly used PM process to achieve higher densities is “re-pressing.” In this process a PM gear (6.6-6.9g/cc, typically) is pre-sintered after compacting. This pre-sintering process removes all the lubricants and binders in the compacted part.
However, it is done at a low enough temperature to keep the material from alloying itself and forming chemical bonds. What is left is a porous, ductile, near net-shape gear that is then re-pressed and fully sintered to achieve higher densities (typically 7.0-7.5g/cc). This gear is then ready for any secondary processes that may be required. Secondary operations commonly performed include turning, milling, honing, roll densification, and any post-sinter heat treatment. The drawback to this process is that it requires two sets of compaction tooling. This additional tooling cost and the cost of the second pressing and sintering operations can often off-set the cost advantages that powder metal commonly offers.

Today, the powder metal industry is headed toward high-density, single-pressed, single-sintered processing. This is achieved through various methods, with the first being warm compaction. This process commonly uses various heating methods to heat the powder before and during compaction. This processing allows for higher densities, but the processing can yield significantly increased costs for higher burden and powder scrap rates than that associated with the re-pressing process.

What makes a good HD4 gear conversion? It starts with the proper gear and part geometries. Not all part geometries work for single press high density processing. With increased densities come increased forces on the tooling that forms the net-shape gear. In normal pressing operations the compaction forces on the tooling will not exceed 40 tons per square inch. This will generally achieve densities in the 6.8-7.1g/cc range, and commonly used tool steels will hold up to such forces without failure. With HD4 processing to densities greater than 7.3g/cc, tooling will generally see forces in excess of 40 tons per square inch. The increased forces require a more-complex tool steel, and most importantly, a robust design. The minimum 1.55 mm cross section commonly used as a rule of thumb in PM processing will fracture and fail at such forces. If required, however, secondary operations can be done to remove any additional material.

The gear tooth design is also critical. Not all teeth are created equally when it comes to powder metal, and that is even more evident when it comes to single pressed high density processing. For example, a fine pitch gear with a diametrical pitch of 96 is difficult to process in PM at low densities Figure 3. Most powder metal component producers will not even attempt it. These problems are caused by the powder particle size being not much smaller than the circular tooth thickness required and the difficulties getting these particles to flow into the PM tooling for proper forming of the gear tooth. Such challenges can be overcome to a degree, but not to the level that single pressed high density processing would be feasible.

There are also challenges with helical gear tooth processing. Although helical gears are commonly produced using powder metal, there are limits to the helix angle that can be pressed. Capstan Atlantic regularly produces gears with helix angles up to 34 degrees. As with fine pitch gears, HD4 has some limitations on the helix angle that is achievable and the part length, or tooth width Figure 4. Generally, HD4 works best with helix angles less than 25 degrees and tooth widths no greater than 25 mm. This is due to the difficulties of controlling tooling movements under the increased forces needed to press to the higher densities and the need for additional compaction of the powder. Typical HD4 applications include:

Although high-density powder metal parts work well for many high-strength applications, it often falls short on some of the more aggressive 8620 applications. This has resulted in the development of Capstan Atlantic’s HD4R processing, which incorporates roll-densification of the gear tooth flanks. HD4R gear applications include:

When considering roll densification, the benefits of gear rolling a powder metal pre-form are many. With our developed processing we achieve enhanced tooth alignment and improved gear characteristics yielding a gear quality level of AGMA Q9. Other benefits include a mirror-like surface finish and customized Involutes to produce lower NVH levels.

The ability to customize the tooth flanks of the gear allows for another critical characteristic in gear conversions, which is crowning. Capstan Atlantic has developed crowning technologies for involute profiles and index error on both helical and spur gears for crowns of 0.01 mm (Figure 1). This has not only yielded lower NVH levels, it has also centralized our load distribution to the center of the gear tooth, thus eliminating the single-point loading that can often cause powder metal gears to fracture and fail. It also reverses the common “hollow” effect that PM gears have in the center of the tooth width. This hollow is common for PM gears due to the centralized low-density area that results from the normal compaction process.

The last—and perhaps most important—benefit of Capstan’s gear rolling process for conversions of high-strength applications is the forming of a fully densified layer in excess of 0.7 mm deep from the tooth flank Figure 5. This pore-free layer yields improved rolling contact fatigue and bending fatigue characteristics similar to that of wrought and forged gears. Roll-densified gear applications (medium density) include:

Capstan Atlantic has been a leader in powder metal gearing for over 20 years and has been producing PM components since 1943. We welcome your queries about this process, and capabilities. 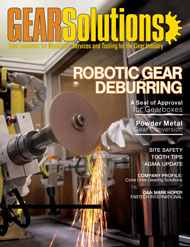