The established continuous generating method was used as the base technology for the polish grinding process, which is distinct from the vibratory superfinishing used in many non-automotive applications. Continuous generating grinding is an established process for the hard finishing of gears. Based on a dressable grinding worm, this process has proven itself, both in terms of flexibility and high productivity.

In principle, the kinematics of this process can be understood as a worm drive (see Figure 1 and Figure 2) with additional abrasive machining movements, consisting of an infeed X, a vertical feed-rate Z, and a lateral shifting motion Y. Without interrupting the gear grinding cycle, polish grinding is performed as a final machining sequence on the manufacturer’s existing continuous generating gear grinding machines while the workpiece remains clamped on the part holder during both grinding and polish grinding. Polish grinding, as a general rule, consists of one polish grinding pass with the resin-bonded section integrated into the end section of the vitrified-bonded threaded grinding wheel, which performs the grinding operation.

During polish grinding, only the roughness peaks are removed, reducing the roughness profile height, therefore, this method increases the contact bearing area of the gear flanks while the geometrical accuracy of the gear flanks is not affected. The polish grinding process delivers surface qualities with mean roughness values of Ra 0.15 μm, compared with the standard values of Ra 0.4 μm used in the industry on continuous generating-grinding machines.

Polish grinding is performed as a final machining sequence, immediately after conventional grinding, consisting of a roughing and a finishing grinding pass. For this purpose, the threaded wheel is divided into two zones, the grinding and the polishing zone, as shown in Figure 3.

This final sequence consists of polish grinding passes with an elastic resin-bonded section of the threaded grinding wheel. There are some fundamental differences between grinding and polishing. Simply put, grinding uses comparatively larger grit sizes and rigid bond structures. Figure 4 shows the comparison between the 80-grit for grinding and the 800-grit for polish grinding.

Polish grinding uses much finer grit sizes and preferably elastic bonds (see Figure 5). The aim of grinding is to give perfect geometry, a “good” surface finish, and fast material-removal rates. Polish grinding, as a subsequent step to grinding, should not alter the given part geometry and should result in, visually speaking, a mirror surface finish. However, for engineering purposes, polish grinding should only remove the surface roughness peaks and must leave intact the valley surface roughness so that oil films can adhere to the polish-ground surface. With the roughness profile height removed, the contact area of the gear flanks is increased. As a consequence, the augmented surface contact area allows transmission designers to increase the power density of transmissions.

After the two grinding passes of roughing and finishing, the gear part retracts from the vitrified zone and “jumps” to the polish grinding zone for its final machining pass, as illustrated in Figure 6.

The continuous generating process, on the other hand, needs only one machine tool and grinds and polish grinds the component in one clamping operation, which makes it economically feasible for high-volume production. In the combined process, the polish grinding perfectly follows the precision-ground micro and macro geometries of the gear profile and lead. Both polish grinding and vibratory superfinishing remove only the peaks on a ground surface texture, which amounts to approximately 1 micrometer. The grinding pass would typically remove about 0.1 mm per flank prior to polish grinding.

A research project at NASA’s Research Center in Glenn (see Figure 7) confirmed in 2002 that superfinished (polished) gears have a fourfold service life in comparison to conventionally ground gears [1]. In this instance, superfinishing was achieved by submersing the gear parts in an abrasive medium and being subjected to a vibration finishing process.

Subsequent investigations confirmed the aforementioned findings on load-bearing capacity. While these initial investigations were all based on vibratory investigations, Reishauer pursued a different way of superfinishing or polishing, building on the continuous generating-grinding process, which was already well-established for the hard finishing of gears in the automotive industry. The aim was to obtain similar surface finishes as the vibratory method. At the same time, the finishing process had to achieve cycle times that would justify its economy for the automotive industry. Furthermore, the process had to maintain macro and micro geometries of ground gears and not allow any thermal damage to the gears’ surface structure.

The continuous generating process uses a single vitrified, abrasive threaded wheel. For the purpose of superfinishing or polishing, the vitrified portion of the threaded wheel has been extended by an ultrafine elastic resin-bonded polishing section. This setup allows a gear part to be ground and polished in one clamping operation and with economical cycle times.

The viability of this combined grinding and polish grinding process was independently verified by the FZG Institute at the University of Munich, which pioneered alternative superfinishing methods as described earlier. The gears to be tested were manufactured using three different continuous generating processes:

A test rig, as illustrated in Figure 8, was subsequently used to investigate the effects of the different surface finishes on gear sets under load.

The polish-ground gear sets were subjected to a load of 1350 N/mm2 (see Figure 9). In comparison to the conventionally ground gears, the polished gears showed a reduction in friction of about 15 percent and resulted in a 4°C lower steady state excess temperature, as shown in Figure 10 [2]. The reduction in friction under load should clearly translate into better fuel economy and thereby proportionally lower output of CO2.

The Aim of Polish Grinding

Polish grinding, as understood in the context of this paper, is the removal of the surface peaks while leaving on some valley roughness. The surface finish parameter Ra is insufficient to describe this type of surface finish for load-bearing properties. According to Mike Stewart in an SME paper published in 1990, “Tribologists have demonstrated that the ideal bearing surface is a smooth one with relatively deep scratches to hold and distribute lubricant, but quantifying and specifying these surfaces has always been a problem. Since its introduction, the bearing area curve has been recognized as the only effective way to characterize these surfaces but is rarely used in specifications” [4].

The bearing area curve, also known as the Abbott material ratio curve, is shown in Figure 13. This curve is in fact a much better indicator for the prediction of the bearing capacity wear behavior of gear flanks than the roughness values Ra (see Figure 14). The arithmetic mean deviation Ra does not differentiate between peaks and valleys, therefore, it has a relatively weak information character [5].

Figure 15 shows a conventionally ground gear on the left and a polish-ground gear on the right. These gears have both been produced by the generating-grinding method, with the gear on the right having been polished by the resin-bonded section of a two-zone threaded grinding wheel. The surface roughness of the polish-ground gear has been substantially reduced, therefore, it would cause less friction in the transmission and, consequently, would offer increased load-carrying capacity and a reduction in power loss.

Figure 16 compares the profile and lead macro geometry of a standard-ground gear with that of a polish-ground gear. (Gear data: 20 teeth, module 3, pressure angle 20°, helix angle 20°, base circle 59.54 mm.)

While the surface finish could be reduced to a surface roughness of Rz < 1.0 μm and a mean roughness of Ra < 0.1 μm, the macro geometry in the active area of the profile and lead was not affected. However, the polish-ground gear shows some rounding off at the edges of the face width, outside the active area of the gear flank. For automotive gears, this rounding off at the edges can be viewed in a positive light and would not affect the gear performance in any way.

Scientific studies have shown that improved surface finishes increase the overall performance of transmissions as the resulting higher bearing ratios reduce micropitting, thus increasing longevity and efficiency of transmissions. Subsequent customer trials using the Reishauer continuous generating methods have confirmed the research results. Micropitting is known to lead to early gear failure, to overall reduction in transmission efficiency, and to noise problems (NHV). In this example, standard-ground, fine-ground, and polish-ground automatic transmission planetary gears were subjected to a simulation test of 100,000 km on a test rig under changing load and velocity profiles, such that the 100,000 km could be condensed into one week (see Figure 17). Subsequently, the initial gear weight was compared to weight after the simulation. Apart from a marked visual difference, the polish-ground gears showed less micropitting, as borne out by the marked lower loss in weight (see Figure 18).

Further industrial trials have borne out that polish-ground gears have a longer service life, as their gear flank surfaces do not succumb to wear, fatigue, and pitting as fast as standard-ground gears. Figure 19 shows a standard-ground gear shaft on the left and its ground mating gear on the right. This gear pair has been subjected to a test run at a constant load of 800 Nm at 4,500 rpm for a specified time period — the standard test procedure of an automotive transmission manufacturer. These ground gears show more scuffing, pitting, and micropitting on their gear flanks.

The same set of gears has been ground- and polish-ground and subjected to the identical test procedure (see Figure 20). While there is some metal fatigue visible in the foot circle of the gear shaft and the mating gear shows minimal wear patterns from pitch circle to tip, the overall post-trial surface quality of the polish-ground gears is far superior.

The results shown here have been witnessed in other trials and are seen as support for the author’s claims that polish-ground gears increase transmission efficiency. Highly accurate gear geometries combined with high bearing ratios ensure that transmission designers can increase power density in their products and thereby make a contribution to better fuel economy and lower CO2 output.

The direct integration of polish grinding as a subsequent step in the conventional continuous generating grinding process translates into minimal investment costs if customers already have Reishauer continuous generating gear grinders. Furthermore, the diamond dressing tools remain the same as for the existing conventional processes. Also, polish grinding requires minimal additional operator training. While there is a small increase in cycle time due to the additional polishing stroke, this is outweighed by the gain in product quality. In comparison, the process of vibratory superfinishing requires two machines: a gear grinding machine and a vibratory machine as a subsequent process with additional costs arriving from more complex material handling as the workpieces cannot be oriented in this process.

The added costs entail a CNC software update and the purchase of specific grinding wheels with two distinct abrasive sections: one for grinding and one for polish grinding. The higher process costs over conventional gear grinding and the equipment investment costs are greatly outweighed by the benefits of the reduction in torque loss, the increase in bearing capacity of polish-ground gears, and higher power density in transmissions. 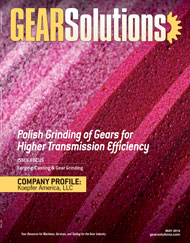