However, these advantages of planetary transmissions rely heavily on the assumption that each pinion carries an equal share of the total torque applied.  In the production process, gear manufacturing and assembly variations, as well as design parameters may prevent such equal load sharing characteristics affecting the transmission performance.

The majority of published studies on dynamic load sharing focus on one-stage planetary arrangements. Hidaka, et al., [1-3] studied the planet load sharing of three-planet gearsets to show, both experimentally and theoretically, that perfect load sharing in a three-planet gearsets is achievable only if at least one central member (ring gear, sun gear, or carrier) is allowed to float.  The same conclusion was confirmed by Muller [4]. In his 1994 paper, Kahraman [5] constructed a dynamic mathematical model of a planetary gear stage that could be set to an arbitrary number of planets and corresponding possible gear sizes and tolerance variations, and fixity or not of the sun gear.  In another paper [6], Kahraman considered load sharing of planetary gearsets again, both in a mathematical model and in experimental work, and showed reasonable agreement between his experimental results and mathematical model for a four- planet system.  Ligata et al., [7] did further work along the lines of the paper of Kahraman [6] but added the numbers of planets and torque as parametric variables in their experimental study and obtained reasonable agreement with the theory.  In Ligata’s work, they demonstrated in an experiment that three- planet systems show excellent load sharing and that four-planet systems with the planets opposite each other  show  good  load  sharing  between  opposed  planets,  but  not  so  good  otherwise. They  also mentioned, and one can see in the data plots, that for constant error and other variables, with the torque held constant, load sharing gets better for higher torques.Bodas and Kahraman [8] used a two- dimensional (2D) deformable-body model of a planetary gearsets and demonstrated theoretically that adding more planets makes the system more sensitive to certain gear and carrier manufacturing errors and assembly variations.  They showed that different types of errors acting on each planet could be combined into a total planet error ei  representing the effective tangential (in the circumferential direction on the circle formed by planet centers) error of planet i.   Singh [9-10] used a three-dimensional (3D) model of the same configuration to obtain similar conclusions.   He showed that the directions of the pinhole position errors are important, with the errors in tangential direction having the most critical impact on planet load sharing.  He concluded that increasing the number of planets in the system without appropriately tightening the pinhole position tolerances fails to deliver expected planet load reductions. His predictions clearly showed the maximum planet loads for an n-planet (n ≥ 4) system can become higher than the corresponding loads for a planetary gearsets with a smaller number of planets, unless the error magnitudes are appropriately controlled.

Ravigneaux compound planetary gear transmissions are based on a simple planetary gear train with a clever combination whose structure is more complex than a simple planetary gear train.  The Ravigneaux compound planetary gear system studied in the paper is illustrated in Figure 1.  A long planet b connects two planes of double-planet gearsets s1-a-b-r and s2-b-r.  Here s1  and s2  are the sun gears, r is the ring gear, and a is the short gear.  All planets, a and b, are supported by a single carrier, c.  The compound arrangements shown in Figure 1 have four central members, s1, s2, r, and c that can be used as input, output, or reaction members.  At any given power flow condition, only three of these four members will have  assignments. Therefore,  by  applying  different  clutching  arrangements,  the  input,  output,  and reaction members can be selected in different ways from the four central members of the gearsets.  This way, it is possible to obtain permutation P (4, 3) = 24 distinct power flow configurations. With such inherent ratio flexibility, it is feasible to achieve up to five desirable forward and at least one reverse gear ration using the same compound gearsets under different clutching schemes. This allows significant reductions in transmission size and weight making compound planetary units very desirable for such applications.

The dynamic model of this system employs a number of simplifying assumptions.

1. Each gear body is assumed to be rigid and the flexibilities of the gear teeth at each gear mesh interface are modelled by a spring having periodically time-varying stiffness acting along the gear line of action. This mesh stiffness is subject to a clearance element representing gear backlash.
2. Each central member was assumed to move in the torsional θ direction and radial x, y direction, while planets a, b were assumed to move in the torsional θ direction only.
3. As the damping mechanisms at the gear meshes and bearings of a planetary gearsets are not easy to model, viscous gear mesh damping elements are introduced representing energy dissipation of the system.

In Figure 2, the central members s1, s2, r and c, which are mounted on linear elastic bearings with the stiffnesses ks1, ks2, kr, kc, are constrained by torsional linear springs of stiffness magnitude ks1t, ks2t, krt, kct. The magnitudes of torsional stiffness constrains can be chosen accordingly to simulate different power flow arrangements with different fixed central members.  Each gear body l (l = s1, s2, r, c, an  and bn) is modelled as a rigid disk with a polar mass moment of inertia ll, radius rl  and torsional displacement θl. Here θl  is the vibrational component of the displacement defined from the nominal rotation of the gear. External torques Ti (I = s1, s2, r and c) are applied to the central members to represent input, output and reaction torque values. The carrier inertia, Ice, is defined in equation 1.

The mesh of gear pair j (j = s1-an, s2-bn, r-bn and an-bn) is represented by a periodically time-varying stiffness element kj  subjected to a piecewise linear backlash function f (δj) that includes a clearance of amplitude bj. A time-varying displacement function of ej (t) is applied along the line of action to account for position error and eccentric error. Loses of lubricated gear contacts are represented by constant viscous damper coefficient cj.

where
ωc, φs1, ψn are the angular velocity of carrier, the initial angle of position error and the planet spacing angles.

Similarly, the tangential magnitude of the position error of planet s2, r, an and bn can be represented by: 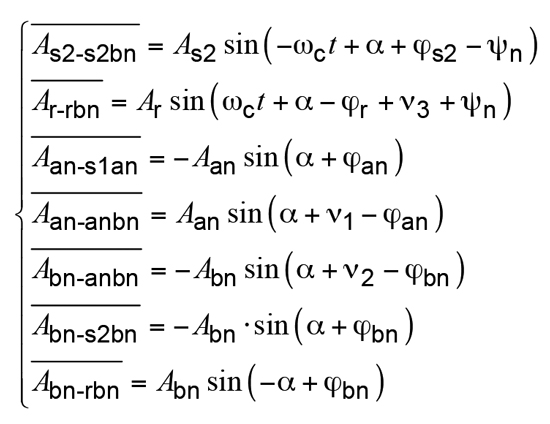 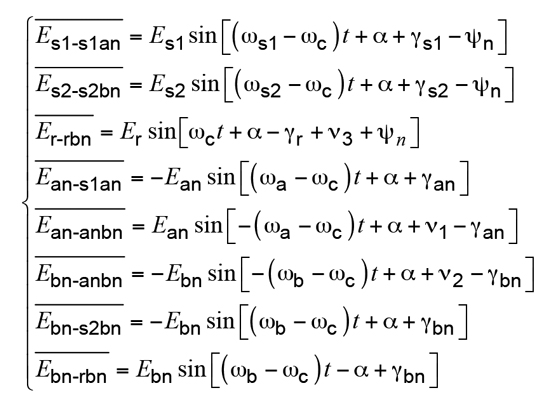 Equations of motion
The relative gear mesh displacements for the s1-an, s2-bn, r-bn, and an-bn are expressed in equations 8 and 9:

where
ψan, ψbn are the angle between the line which cross the ideal geometric center of an, bn and the coordinate origin O and the x axis of coordinate OXY.

Define Pj  and Dj  as the elastic and damp meshing force of the gear pairs respectively, which can be expressed as follows.

The piecewise-linear displacement functions are defined as

The equations of motion shown in Figure 2 are written as

The equations of motion (12 through 18) are nonlinear due to tooth separations and have time-varying stiffness. Since an analytical  solution is not available here, a time-domain  numerical  integration technique is employed to solve equations of motion. The dynamic force on the gear mesh j is then obtained using the expression:

In order to study the load sharing behavior of the system, the dynamic load sharing factor Bj is defined as follows.

Table 1 and Table 2 illustrate the parameters with numerical values of the transmission system that will be used in this study. 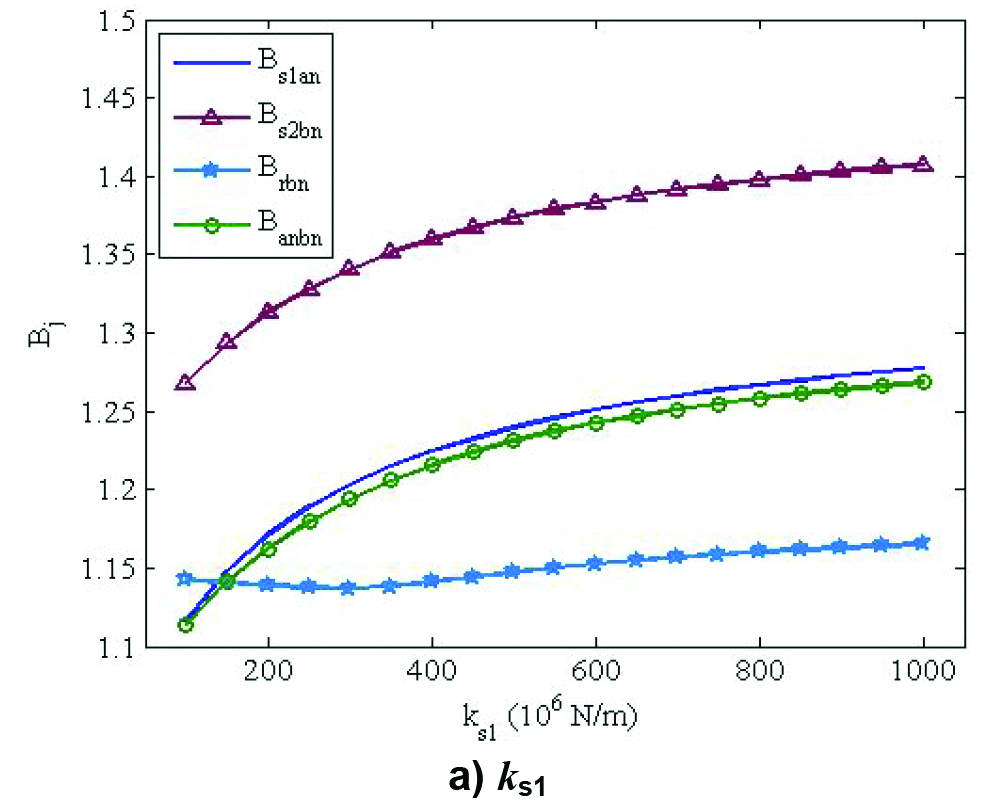 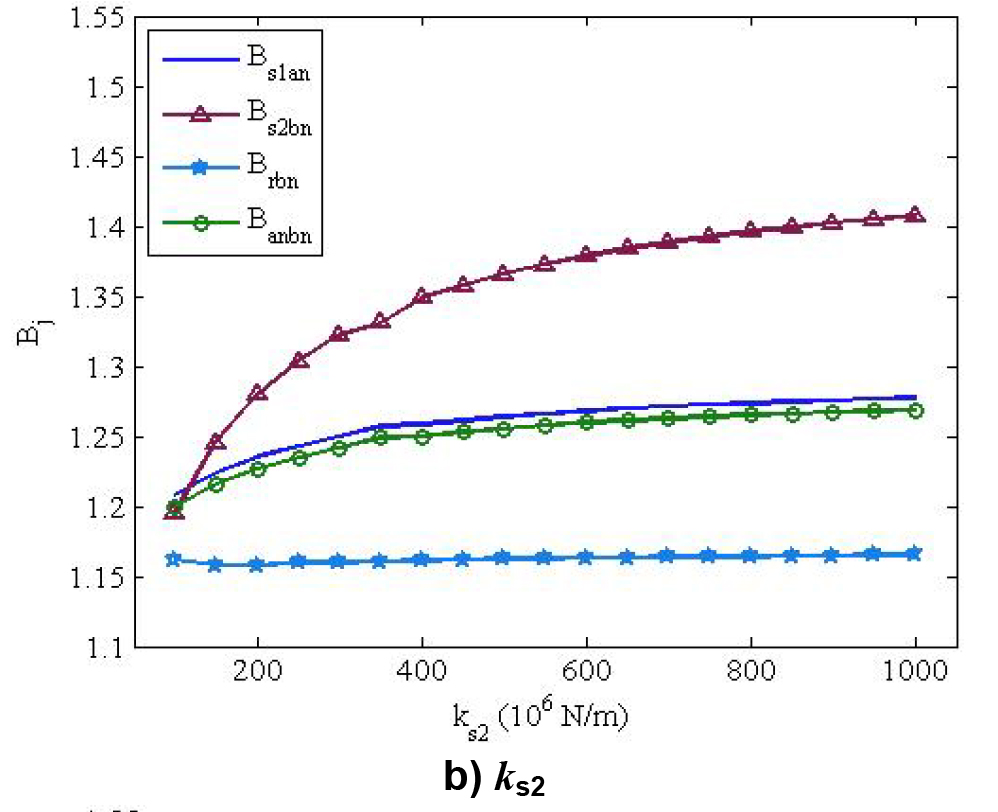 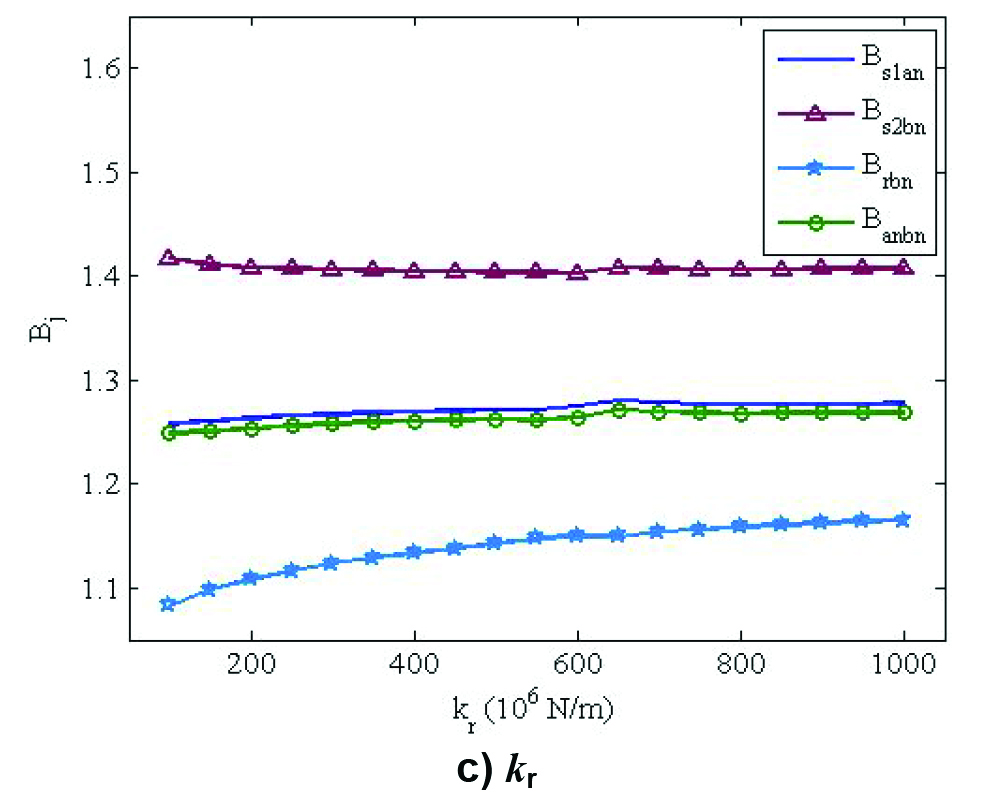 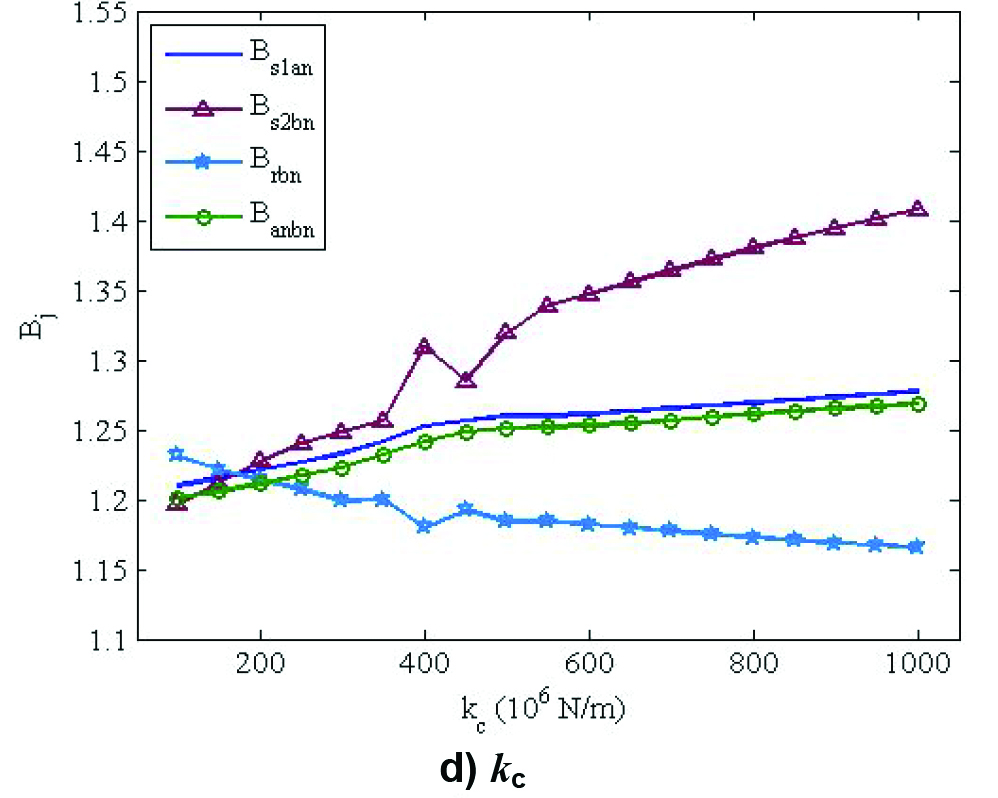 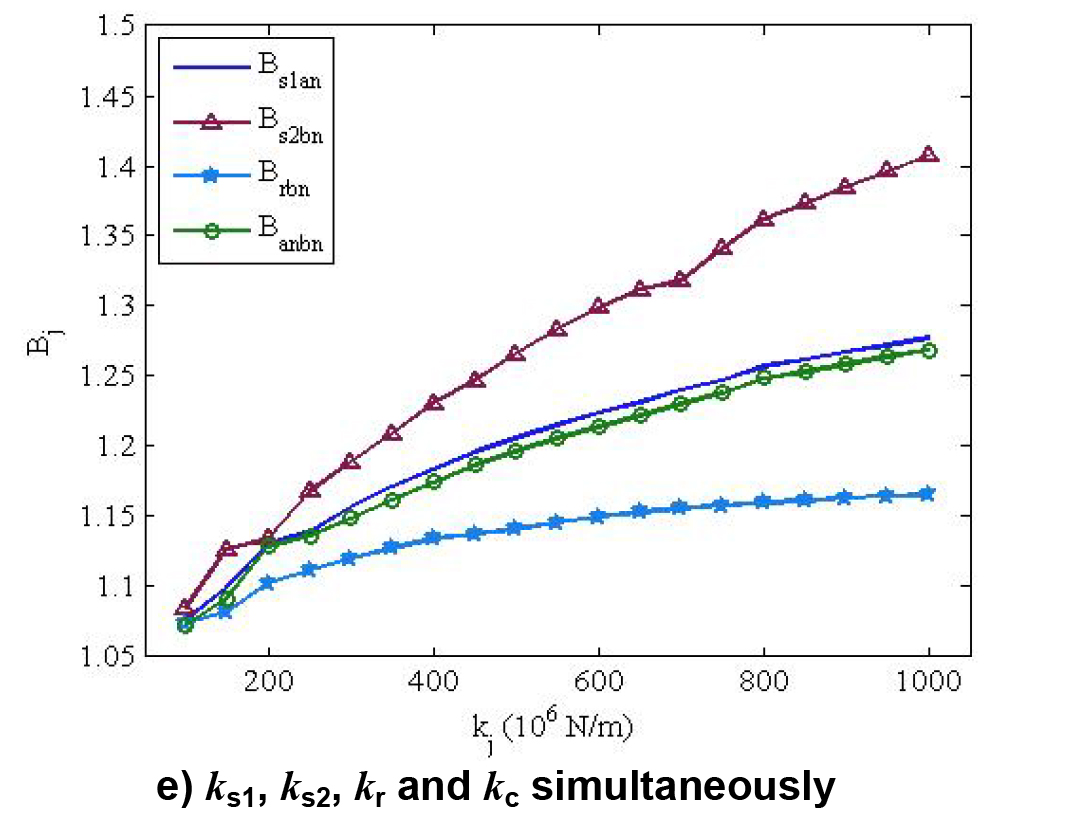 Floating multiple central members can help to improve the overall load sharing characteristics of the system.

In this paper a non-linear dynamics model of Ravigneaux compound planetary gear train was set up.  The model equations allow the analysis of arbitrary number of pinions spaced around the sun gears.  Position errors, eccentric errors and tooth separations are included in the equations through nonlinear time- varying relative gear mesh displacement functions. 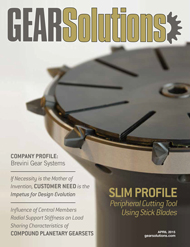 Cutting Out the Whining