The goals and objectives of this investigation focused on highly distortion-prone gearing (Figure 1) to determine if dimensional improvements could be realized by applying low pressure vacuum carburizing technology utilizing either oil or high pressure gas quenching. The gears in question are traditionally atmosphere carburized and plug quenched.

Gears were taken from multiple locations throughout each load for analysis (Table 1). Parts for metallurgical evaluation were selected from the center of each load. Multiple areas on each part were then analyzed for microstructure, case depth, and hardness (surface, profile, core). Dimensional checks (out of round, gear tooth profiles) were conducted on the gears before and after heat treatment. Although only a portion of the complete test program could be presented here, the results are representative of the entire study. Figure 3

Carburizing was performed at 1760°F (960°C) for 3.34 hours followed by either oil quenching (variable agitator speed) or high pressure gas quenching. Targeted surface carbon content was 0.72 percent C (vacuum) and 0.80-0.90 percent C (atmosphere). Gas quenching utilized four changes in speed and pressure made through the critical transformation range of the material while the oil quench utilized two changes in speed (70 and 40 percent). Tempering was performed at 300°F (150°C) for two hours at temperature.

Dimensional variation was determined by measuring both out of round (Table 7) and by coordinate measuring machine (CMM) measurement of the gear tooth profiles (Figure 6, Figure 7, Figure 8, Figure 9, Figure 10, Figure 11, Figure 12, Figure 13). With respect to the gear charts shown, the lead was measured across the tooth or spline from side to side at the pitch diameter. This method checked for excessive taper. The involute measurement was taken on the tooth form (active profile), starting from the root diameter to the tip of the tooth. Indexing (index error) measured the tooth spacing from tooth to tooth around the gear. Gear or spline run-out measured variation of concentricity of the centerline (datum) of the gear.

The following are the principle results of this investigation:

The authors would like to thank Andrews Products, in particular Mark O’Neill, gear engineer, for his insights into the test results, and Dan Guy and Eddy Cespedes of the gear department for their assistance with measuring the test gears. 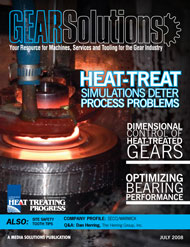