There is a lot to be said for the precise measuring methods that can be achieved right on the production machine, specifically on the 5-axes LFG.

The LFG does not require a dressing axis, which rules out one potential source of inaccuracy. Another difference to comparable machines is the inversion of the shift and swivel axes. As a result, the mechanical limitation that results from the process of “first swivel, then shift” is overcome. This special arrangement allows for the dimensioning of shift travel to be much larger than usual.

The machine’s directly-driven table, featuring a highly dynamic wear-free torque motor, is a key component in allowing the machine to single- or double-flank grind precision- and custom-topographic tooth flanks.Because the machine also uses the shift and swivel axes to dress the grinding disks, the dressing axis can be eliminated.

The basic LFG model’s grinding disk is dressed by a single dresser in combination with the shift and swivel axis. The Syncdress design provides two dressing rolls that dress simultaneously left and right and greatly reduce dressing time. (Figure 1)

Crowning could only be performed via the X-axis in conventional grinding machines. Twist, however, occurs when this type of crowning is employed in profile-grinding. The result is an altered profile angle over the entire face width. The problem of twist due to this crowning method has played a rather minor role in gear manufacturing development for quite some time. (Figure 2)

The axes of the LFG facilitate additional movements and generate the opportunity to create the desired degree of crowning and prevent twists, even if double-flank grinding is involved, by overlapping the axis movements. (Figure 3)

By using the V, C and A-axes in addition to the X and Y-axes, the profile angle can be modified and the twist problem can be solved for both single- and double-flank grinding. In this way the operator can completely avoid tooth flank twist or intentionally produce it in compliance with the narrowest of tolerances.

Certainly the opportunities that the five axes create with respect to twist are limited by mathematics. Additional clearance allows for precision topological grinding.

The division of the topography into multiple strip-shaped areas and corresponding processing with multiple strokes provide a multitude of specific options, for example, for prototype development or academic applications. The operator no longer has to concentrate on fHα and Cα corrections, but rather can target individual points for processing.

The figure shows how, during radial infeeding, the removed material near the tooth head is greatest at three infeeds during the final strokes. The workpiece is subjected to unnecessarily-high loads as a result of variable grinding steps. Microstructure damage occurs frequently.

Five-axis infeeding produces a (as far as possible) constant allowance distribution over the course of the strokes. The principal material for this wear-optimized grinding is no longer left to wear out on the tip; as a result the risk of grinder-burn is minimized, and the workpiece is protected. Number of strokes and production time can therefore be reduced, depending on application.

The different involute gear profiles (pinion/planet/cylindrical) show the distinction between the three tested gears, which lies primarily in the curvature in the involute gear profiles. Thus, in the case of a pinion with maximum curvature, the maximum benefit can be derived by using the 5-axis infeed method. (Figure 4)

The measuring sensor swivels laterally along the grinding disk. It uses the large shift travel (+/- 300 millimeters) and, like a dedicated measuring machine, measures the gear. This leads to an additional acceleration of the process. Table rotation and radial infeed are not required for measuring, which contributes to additional precision of the measurement results. (Figure 5)

With calibration in mind, conventional methods of measurements usually focus on a very sensitive fHα profile angle. There is additional potential for inaccuracy when a machine radially retracts and extends its stylus. The sensitivity is considerably lower and, accordingly, the results more accurate when retracting laterally (shifting). There is a lot to be said for the precise measuring methods that can be achieved right on the production machine, and specifically this 5-axes LFG. 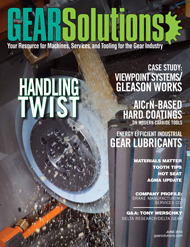