Home Features Gearing Up to a Better Chamfering and Deburring Process

The chamfering and deburring of gears is often an undervalued process in gear production. However, it has a great influence on the usage characteristics of the work piece.

As with any machining process, the manufacturing of gears by hobbing or shaping results in burrs on the front edge. These burrs must be removed because they are hazardous to machines, tools, operators, or the process in general. This chamfer and deburring process should be carefully considered at the beginning of a new project for gear manufacturing.

Unfortunately this isn’t always the case. Instead, the focus in many cases is mainly on hobbing or shaping, but it should be kept in mind that almost every gear needs to be chamfered and deburred (Figure 1).

For instance, the hardened burrs can break off inside the gearbox and lead to failure of the gears and bearings. Residual burrs in the tooth gap after hardening are extremely sharp and will quickly destroy the grinding or honing tools during hard-fine finishing. The operators handling the work pieces run the risk of injuries caused by sharp and pointed edges of the burrs.

The chamfering itself has two main tasks. A chamfered tooth is protected against damages during the handling of the work piece. This means the risk of nicks in the active flank is minimized. The other task of chamfering is to avoid the risk of over-carburizing the pointed front edge of the tooth during case hardening. This results in breakage under load.

For all these reasons, gears must be chamfered and deburred. The chamfering and deburring process is often technically undervalued and does not receive the attention it deserves. However, ignoring the issue can lead to inevitable production downtimes.

The most important processes used in the industry are briefly described below:

Manual chamfering and deburring with hand tools: This is a difficult and quite imprecise process primarily used for low-volume or large gears.

Impact milling: In impact milling, the rotating milling tool is moved axially to the point of processing with a plunge cutting feed, stays there for an instant, and is then retracted to the starting position.

Grinding with disk-shaped grinding wheels and/or milling with rotary cutters: These processes generally work with one or more swinging grinding/milling tools that use adjustable contact pressure to probe the edges of the teeth. The chamfering quality depends on these forces and the rotational speed selected for the work piece.

Chisel method: In this process, a specially formed chisel is used for chamfering. The spacing between the teeth is generally continuous in this case.

Milling with chamfer hobs: In this case there are two additional disk shaped tools mounted on the hob spindle. After the hobbing process, the chamfer tools are shifted into working position. The first side of the gear is chamfered with the first tool. Then the direction of tool rotation is changed, the position tool/work piece is adjusted again, and the second tool chamfers finally the other side of the gear.

Rotary chamfering and deburring: In this process, a specially formed gear-shaped tool engages with the work piece. Their axes are parallel and there is only a radial plunge infeed. The desired chamfering is obtained after a few turns. The chamfer process itself is chip-free. The material removed from the plane sides is then cut off by deburring with a simple tool, such as turning tools or file discs.

All the processes listed have their particular areas of application. For large-series production, however, in addition to the shapes and qualities that can be produced, the determining factors include processing times, tool cycle times, and automation options. Rotary chamfering and deburring has therefore assumed the dominant role in the automotive and motorcycle industry, and we will now examine it in more detail.

The technology of rotary chamfering and deburring is primarily integrated in the tool itself. It is adapted to the specific processing task and is therefore work piece-specific in most cases. The diameter of the tools is generally between 150 and 200 mm. It is beneficial to choose a prime number as the tooth count. The range for the module that can be chamfered is about 0.8–5 mm. The rotary chamfer tools are made out of high-speed steel dedicated for cold forming operations. Especially for dry chamfering, it is recommended that the tools utilize state-of-the-art coating materials (Figure 2).

Both sides of the tooth must generally be deburred and chamfered. As such, the tool consists of two chamfering wheels. These are combined into a compact unit by the synchronization gear in the middle. During the production operation, the chamfering wheels do the shape-forming work to achieve the chamfers. Because rotary chamfering is a non-cutting operation, the squeezed material has the tendency to flow to the plane faces of the gear or in the tooth gaps.

For special applications, the tool package can be modified. If the chamfering quality requirements are lower, it is sufficient to replace the synchronization gear with a spacer disk. This is particularly the case if shaving is to be done afterwards or if chamfering is carried out between two cuts during hobbing.

The synchronization gear can also be provided with a burnishing sector. This means that over the space of about 180 degrees, it is wider than the work piece and ground hollow in the direction of the flank lines. The result is that only those zones on the tooth flanks of the work piece are contacted, in which a secondary device can enter the tooth gap (Figure 3).

These minimal but sharp secondary burrs are then rolled down by the burnishing sector. The remaining sector of the tool then handles the chamfering work. This variation is especially practical for subsequent hard finishing of the tooth flanks. If the secondary burrs are not removed, they will be extremely hard and sharp after hardening. To protect hard finishing tools such as grinding wheels or honing rings, it is essential to remove them.

Rotary chamfering and deburring can be carried out either with individual machines or by units integrated into hobbing or shaving machines. In the past it was common to have a separate machine for hobbing or shaving and an additional stand-alone machine for chamfering and deburring. This has changed in recent years. Most of the modern machines are now equipped with an integrated chamfer/deburr unit, and for good reason. Because floor space is expensive, it is increasingly important to minimize the footprint of the equipment. An integrated chamfer unit does not need any additional floor space because it is fully integrated into the base machine (Figure 4).

In addition, the cost of an integrated chamfer/deburr unit is significantly lower when compared to a stand-alone machine. This can be easily explained, because the control, the chip removal, the lubrication, and the power supply from the base machine are utilized. In addition, the automation between the two processes is far simpler.

The deburring machines or units are relatively simple and consist of two parallel spindles whose center distance is reduced during processing. It does not matter whether the work piece or the tool is driven. The direction of revolution during the chamfer process is normally constant, but there are also solutions in which the direction is changed during the operation. It is also possible to have an electronic synchronization of the driven work piece and a driven chamfer tool. This has the advantage that the tool and the work piece can come faster into mesh and the risk of damaging the tooth tips during the plunge motion is greatly reduced.

Speeds generally range from 100 to 150 rpm at the tool, and the processing itself takes only two to four seconds. The material pressed to the face by the chamfering process is then cut off in the last work step by chisels or deburring disks positioned by spring force. This compensates for the width tolerances of the work piece. The positioning itself can be done using a controlled axis or even hydraulically.

In all cases, at least the sharp front edge should be provided with a chamfer. However, this is the exception, since generally both the sharp and the blunt edge must be chamfered. The corresponding design of the tool permits a variety of chamfering shapes to be obtained with a defined chamfering angle (Figure 5).

Experience shows that a comma-shaped chamfer down into the root of the tooth is recommended when chamfering on both sides. However, a parallel chamfering shape can also be produced. Normally, the chamfering angle at the foot of the tooth is about 45 degrees. Measured from the flank, it should ideally not exceed 30 to 35 degrees. Here, up to module 5 mm, a chamfering width of less than 0.7 mm should be the goal. The size of the chamfer is thereby distance checked less than 90 degrees to the gear faces.

Roller deburring tools can be reconditioned about 3 times after use. Generally, the tool life when processing an automotive gear should be up to 10 million work piece teeth when using coolant. When dry processing, a tool life of about 2.5 million teeth can be expected.

If the costs are converted into cost per work piece produced, it is quickly apparent that the cost per work piece for chamfering with the described deburring process is low. However, it is equally obvious that the process can only be cost-effective when working with large unit volumes, that is, in series production. 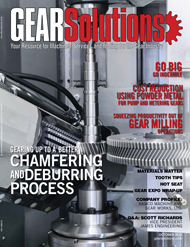