An advanced gearbox prototype and a niche-manufacturing success story underscore the advantages of taking the high-quality approach.

Innovative engineering design, advanced materials, and top of the line components can yield significant improvements in gearbox efficiency, reliability, and performance. Consider two recent examples: The first involves the design and development of a high-concept gearbox that represents a leap forward in gearbox performance. The second describes the remarkable success of an Italian manufacturer of gearboxes for plastic extrusion machines–a story that has important lessons for OEMs in many different industries.

A team of SKF rotating equipment technology engineers recently designed and built a compact “size 250” concept gearbox that dramatically exceeds the reliability and performance of larger industry standard gearboxes. Called the SKF 18k (for karat), the concept gearbox has achieved improvements previously thought impossible in such compact equipment. It produces the same power output as the larger “size 280” industry standard, but weighs 15 to 20 percent less and has 12 to 25 percent less volume.

To achieve the required reliability and compactness, technicians applied advanced system analysis and employed SKF computer calculation and simulation tools called BEAST and Orpheus to simulate the dynamics of the gearbox over a range of loading and speed duty cycles. The computer programs predicted the performance of gearbox components, including bearing life, system deflections, friction losses, and vibration.

SKF teamed with a partner to optimize the prototype’s gear profiles. As a result, the concept gearbox includes completely re-engineered gears, the features and precision of which exceed most standard-production quality levels.

In addition, the concept gearbox contains nine SKF Explorer high-performance bearings, including four spherical roller bearings, three cylindrical roller bearings, and two angular contact ball bearings. Seals containing a new nitrilic compound were created especially for the application. Due mainly to these bearings and seals, the gearbox has a projected service life of over 50,000 hours, compared to 20,000 for standard size 280 gearboxes.

Even the oil employed in the application was reformulated. Together with a lubrication partner, SKF developed an oil that was specifically formulated to cut friction, reduce heat generation, and increase service life.

In addition to offering a high power output for its size and weight, the concept gearbox has experienced an energy savings of 10 to 15 percent, a 15 to 20 percent reduction in oil use, and a 90 percent reduction in maintenance costs as compared to the larger industry standard gearboxes. Although it was produced to showcase innovative gearbox technologies rather than for sale, the 18k concept gearbox demonstrates that current barriers to improved gearbox performance can be overcome.

The concept gearbox is an excellent example of how innovative engineering is being used successfully by SKF to explore the potential for optimizing gearbox performance. But innovation can also be achieved by companies that may not have their own world-class research labs. Consider how Zambello Riduttori — an Italian manufacturer of gearboxes for plastic extrusion machines–combined innovative marketing tactics with bearing technology provided by SKF to compete successfully in a highly competitive sector.

The company was founded by Zevio Zambello, who at age 18 left his hometown to seek his fortune as a mechanic in the industrialized region north of Milan. In 1957 he began supplying components for gearboxes employed in the plastics industry, which was booming in the aftermath of World War II.

In the 1980s Zambello noticed that, in Germany, speed-reduction gearboxes for plastics machinery were being produced by outside suppliers rather than produced in-house, as had previously been the case. He decided to employ the same strategy in Italy, focusing on customers who manufactured extruders for plastics and rubber. Zambello Riduttori soon became the first Italian supplier of gearboxes for plastic extrusion machines.

Production has grown consistently since then, validating Zambello’s business strategy. Today the company produces 10,000 gearboxes per year, and for most of the past decade the company has been growing at an annual rate of 30 percent. Half of the company’s production is sold outside of Italy.

The company’s success is all the more impressive when one considers the main competitors in its market sector–multinational companies with huge research and development budgets and tens of thousands of employees. Zambello officials point to a high degree of specialization and flexibility as important factors in the company’s continued growth.

The high performance bearings for gearbox applications enable leading plastic machinery manufacturers such as Zambello Riduttori to boost machine performance, reduce maintenance requirements, and ensure reliable machine start-ups. In addition, SKF engineering support can be of particular importance for a highly specialized company like Zambello, which is small in size but has a global customer base. This support can help identify any problems and eliminate them before gearboxes leave the factory.

Company founder Zevio Zambello summarizes the company’s approach. “We focus on the high-quality niche because our after-service costs are nil. Our lifetime costs are low because our machines don’t break down. We never trade quality for cost,” he says. “Our prices are competitive, but we do not compete on price.”

Zambello Riduttori has two major manufacturing facilities: one in Magnago, Italy, not far from Milan’s Malpensa Airport, and the other in Lendinara. The Magnago plant produces larger gearboxes, which can cost as much as 100,000 euros. Lendinara manufactures smaller gearboxes, of which more than 90 percent are standard orders. Although Zambello does not manufacture custom machines as such, about 50 percent of its total orders are non-standard.

Zambello’s manufacturing facilities and processes reflect the company’s high-quality approach. Production facilities are designed so that vibration from one machine does not affect the operation or performance of other equipment. Noise is virtually absent. The factory floor is also designed to minimize the effects of temperature and humidity, which can affect gearbox performance. 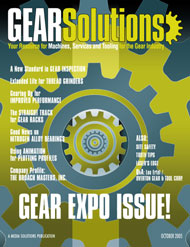 The Brilliance of Broaching