DDS modeling is a quick, easy, precise, and cost-effective means of mapping the contact points on a wide variety of gear surfaces.

Direct Digital Simulation (DDS) is a universal method for computer modeling of gear design manufacturing and analyses. Unlike the commonly used differential geometry, the DDS method is based on Boolean operations. DDS does not require calculating first or second derivatives for finding the envelope of surfaces. The DDS method finds the envelope of the surfaces by direct digital evaluation of the domain where the moving surface leaves its footprints. The footprints are the copies of the moving surface along its pass. The copies are made with an increment as small as is necessary to achieve the required accuracy. The final envelope is calculated as a matrix of points located on the surface. The resulting matrix is used for different analyses like Tooth Contact Analyses (TCA) or stress analyses. The DDS method does not generate the equation of the final envelope. Instead it generates the digital data that can be passed directly to the commonly used engineering CAD and FEA software products. Figure 1

The author started to use the DDS method for helicopter gears in 1986. The first time the method helped to simulate a complex involute-point gear tooth designed for Mi-26 helicopter transmission at Mil Helicopter Company in Moscow.

The author has been using the simplicity and low calculation cost of the DDS method for developing gear design and analyses software for 20 years. The method was used for almost all existing gear designs. DDS was also used for writing software for gears that do not currently exist. Ultra Globoid Gear is a good example of the software development for one such gear. Figure 2

The DDS software was successfully tested on the different gear drives: spur, helical, spiral bevel, hypoid, worm face, worm, double-enveloping worm, globoid, crown-face gear, hyperbolic gear, and variable ratio rack. However, the most important value of the DDS method is its unique capabilities in digitizing and visualization. A good example of the digital advantage is the calculation of driving efficiency. Today the efficiency of a gear set needs to be evaluated more accurately than can be done using standard formulas. The formulas give an approximate value of the driving efficiency based on the middle point on the tooth surface. The DDS method is capable of calculating the driving efficiency for each location of the contact point on the tooth. For example, the DDS method can be used to improve driving efficiency on spiral bevel helicopter gears and on hypoid automotive gears. The DDS method evaluates each small element of the contact area to calculate the sliding and friction (Figure 4) The resulting driving efficiency is calculated based on a summary of the friction torque on each of the elements on the tooth surface.

The discovery of the tooth contact geometry on Wildhaber-Novikov (WN) gears is a good example of the visualization value of the DDS method. Before DDS visualization, it was mistakenly believed that the contact area on the WN gear tooth is elliptical. It used to be a common error to calculate two axes of the contact ellipse for evaluation of the gear contact strength. The DDS high-resolution visualization software shows that the real contact area on a WN gear is not an elliptical shape.

The modern technology is getting more complex and more expensive. New scientific theories are more complex and harder to understand. DDS is just the opposite. The DDS theory is simple and more understandable for writing gear engineering software. The DDS method uses the power of modern computers, and the method is progressing alongside the progress in computers.

The DDS method works for any gears and any tooth forms. A good example of an advance software development is the spiral bevel gear calculation software for complex tooth form in Figure 2. The commonly used spiral bevel gear software fails to calculate the complex tooth geometry because of the discontinuity of the first derivative on some areas of the cutter profile. The DDS method does not use the derivative calculation, so the DDS successfully calculated the finished tooth geometry for the complex cutter profile.

The DDS method visualizes the removal of material from the gear blank during cutting. The DDS software calculated the cutting speed and thickness of the stock removed from the tooth surface. Different cutting processes can be simulated. The number of cutters and the feed rate determine the final geometry of the gear tooth. Figure 8

The DDS method provides excellent three-dimensional visualization options. With the large number of data calculated by DDS, it is easy to use a standard visualization tool like OpenGL. All the DDS written software products carry a complete collection of standard CAD visualization options like realistic rendering, zooming, 3D rotation, transparency, and surface analyses. Figure 9

The DDS method can be used with existing CAD products like AutoCAD or Unigraphics Figure 10. This is the easiest way to write DDS programs Figure 11. The DDS would operate with solid CAD models by simple programming blocks. For example, a worm face gear in Figure 12 can be cut in AutoCAD with a short AutoLISP program:

Unfortunately, the existing CAD programs are not always capable of performing very fine Boolean operations on cutting. For example, AutoCAD and Pro/Engineer give errors when performing Boolean operations on whirling of a worm face tapered pinion (Figure 13). The CAD programs are also very slow, and it takes a great deal of time to get high calculation accuracy. The retail cost of the standard CAD software is very high and comparable with the cost of a custom multi-optional DDS program.

The DDS software is easy to extend with stress calculation options. The large number of data points on the tooth makes it easy to generate the finite element grid. Figure 14

The DDS method has been in use in advanced gear development for over 20 years. A number of different gear software products have been developed based on DDS: spiral bevel, hypoid, worm, worm face, crown face, globoid, variable ratio rack, spur, and helical. DDS software has become an advanced three-dimensional CAD tool for gear design and analyses. The calculation and visualization advantages of DDS allow making new discoveries in gears. The DDS method helped to solve the mystery of Wildhaber-Novikov gears. For the first time, the WN gear tooth contact has been evaluated in three-dimensional space. The three-dimensional DDS visualization points out a mistaken understanding of two-dimensional flat theories. The modern demand for improving the drive efficiency of gears requires an accurate calculation tool. The DDS method provides the highest accuracy and resolution for precise calculations. 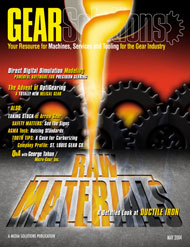